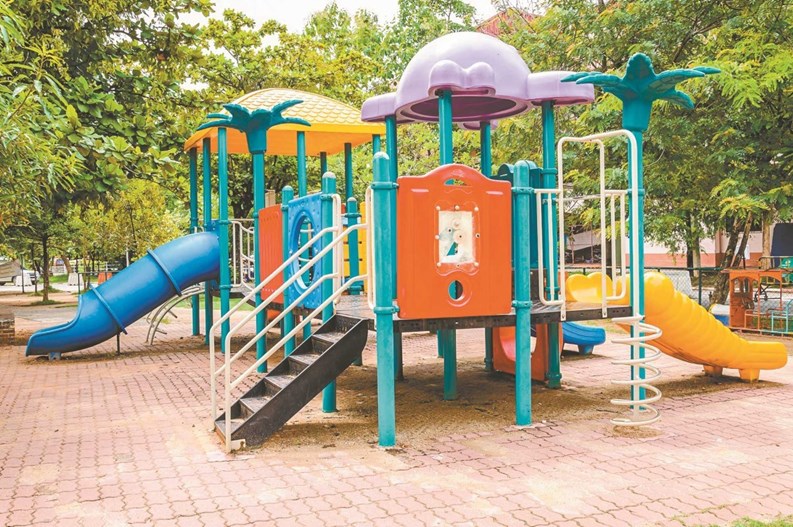 Sixty years ago, work and play were very different. A majority of women remained in the home, in both urban and suburban settings. The mostly male heads of households went off to work, and children went off to school and play. Since then, a lot has changed—and that includes how and where kids amuse themselves. While earlier generations might have rounded up the kids in the neighborhood for a (largely unsupervised) game of after school sandlot ball, the 1960s ushered in a more organized playing field—quite literally. Coinciding with the entry of more women into the regular workforce, extended school hours and after-school programs, Little Leagues, and other supervised sports programs provided kids with not just fun and exercise, but a structured form of child care.

These programs provided an alternative to the 'latchkey kid'—the child left home alone during the hours between the end of school and the parents' typical work day. Instead of a spontaneous game or free playtime in the neighborhood, children were soon scheduled for play dates at a time when busy parents could coordinate and supervise the activities. And as the how’s and where’s of child’s play changed, so did the playgrounds and play equipment.

Playgrounds are in the minds of Chicagoans more than ever now, thanks to the March 2013 launch of Mayor Rahm Emanuel's “Chicago Plays” playground renovation project. The initiative is a joint collaboration with The Chicago Park District and the Park Advisory Councils that aims to replace old and unsafe playground equipment and renovate grounds with new play pieces at more than 300 parks city-wide. The program hopes to reach its goal in five years.

Up until about the mid-1980s, playground equipment at parks and schoolyards looked pretty similar; most of it was constructed of galvanized metal, and a typical playground included a slide or two, swing sets, monkey bars, a merry-go-round, and maybe a sandbox. A community playground might be set up in a grassy or sandy lot to soften falls and help prevent childhood injuries, but asphalt was also a common surface, particularly for school yards and public recreation centers.

While galvanized metal was undeniably durable, it also got freezing cold in the winter and frying-pan hot in the summer. The pieces were bolted together, sometimes creating rough or protruding edges that could cut or snag a child, and those same bolts required regular maintenance to ensure proper structural integrity.

Nevertheless, by the mid-1980s playground equipment was beginning to evolve. Galvanized playground pieces were first replaced with wooden or composite structures, often designed to look like forts or tree houses with rope webbing and ladders. Platforms and decks were used to separate activities and accommodate a variety of ages and interests. While definitely a step up from metal, wooden and composite structures had their own drawbacks. Weather damage, warping, splintering and the need to reseal and stain the exposed surfaces posed safety risks and added to maintenance and replacement costs.

By the early 1990s, however, things were changing once again. At this point, the best commercial playground manufacturing companies were using blown plastic parts (BPP) over powder-coated metal frames. The benefits of BPP were obvious; the new material was flexible, durable, lightweight, and loaded with options that allowed for creative special themes and effects. It is this ability to add creativity, themes and the 'wow factor'—all while maintaining safety—that makes the difference when the board of a condo or HOA goes shopping for playground equipment.

The Value of Play

John McConkey is the market insight manager for Landscape Structures, a company located in Minnesota that provides playground equipment and structures nationwide. “Kids haven’t changed,” he says. “They still want to swing, and slide, and climb and spin. It's important to appreciate the value of play.”

McConkey also is aware of the health and wellness aspects that can be built into a playground design. He works with clients toward establishing healthy play goals to include cardio, balance, endurance and muscle strength.

Above all else however, safety and accessibility are issues that must always be factored into a playground design. The Americans with Disabilities Act (ADA) has readily available legal guidelines and requirements, and McConkey also recommends the Consumer Product Safety Commission's (CPSC) Public Playground Safety Handbook as an additional resource when a board is gathering information and ideas.

In addition to BPP, McConkey is excited about a product known as glass fiber reinforced concrete (GFRC).This product allows playground manufacturers and installers full creative license for the hottest trend in playgrounds today: themes. GFRC lends itself to sculptured caves, rock walls, life-like animals and other special effects often found in national theme parks. “It is now possible to create a sense of place or fantasy,” says McConkey.

As stated previously, playground equipment is about more than just fun and games—safety is a prime concern when it comes to the installation and use of slides, monkey bars and the like. A slew of playground incidents resulting in serious injuries led the CPSC to publish the first Handbook for Public Playground Safety in 1981.Designed to provide guidelines for making playgrounds safer, the handbook remained largely the same until 2008, when the CPSC made several significant revisions. Age ranges were expanded to include children as young as six months, guidelines for track rides and log rolls were added, the critical height table was revised and suggestions for surfacing over asphalt were added.

Illinois requires child care centers to abide by the CPSC guideline which orders the use of protective coating (89 Ill. Adm. Code 407.390). While Illinois doesn't mandate all playground equipment meet all CPSC standards, state laws are similar. For instance, according to playgroundsafety.org, Illinois requires there be a six-foot fall zone around all play equipment, swings not included. State law also requires playgrounds be inspected daily by day care directors before equipment is used to ensure optimum safety.

Keith Davis, a sales manager for MRC Recreation, which has offices nationwide, also recommends the American Society for Testing Materials (ASTM) as an additional resource during the planning stage. “There is also a Playground Safety Inspector certification course now offered by the National Playground Safety Institute (NPSI),” he says. “The two-day course includes a three hour test, and the certification last for three years,” Davis says.

Depending on the property, a board or management company may want to add this certification to an existing maintenance job description.

It is theoretically possible for an HOA or condo community to undertake a playground project on their own without professional input, but Sorcha Morency, a marketing communications specialist at Florida-based BYO Playground, points out both safety and cost issues that may be involved if you do-it-yourself. “It is unlikely that you will save money, and less likely your playground will be compliant with safety standards or ADA requirements,” she says.

Whether your community works with a playground pro or opts to go it alone, “Work through a network and perform a through needs assessment,” advises McConkey. “Who are you serving, and how many? How much space do you have? And what budget do you have in mind? Don’t forget to be inclusive, and include access for all levels of ability.”

Whether your community works with a playground pro or opts to go it alone, “Work through a network and perform a through needs assessment,” advises McConkey. “Who are you serving, and how many? How much space do you have? And what budget do you have in mind? Don’t forget to be inclusive, and include access for all levels of ability.”

Ian Proud, a research manager for Pennsylvania-based Playworld Systems, reminds boards to check all local regulations whether the community is planning a manufacturer’s or a do-it-yourself install. “Local regulations will provide requirements related to assessments, and permits,” he says. Proud says he supports community DIY-builds when an experienced professional leads the actual playground installation. “Such builds generate an amazing spirit of camaraderie among community members,” he says. “People involved in the construction of a community playground tend to adopt it as their own and care much more about it.”

Davis agrees, noting, “I would not recommend that an HOA design and build their own equipment from scratch. But I do think it is always good if the community wants to install something from a commercial manufacturer.”

“A potential buyer would serve themselves and the community well by defining what targets they would like to achieve with a playground, and what kind of play appeals to them. Play can range from electronic to ground-based to designs for children of all abilities that enhance fitness and wellness,” Proud says.

Once a board has finished its research and defined its goals, it’s time to meet with a qualified consultant. “This is how you bring concepts to life,” says Proud.

Davis concurs. “If you can dream it, we can build it,” he says. Today’s products like BPP and GFRC allow manufacturers to “convey a story and create a sense of place,” says McConkey. And, “The nice thing about playground equipment is its ability to scale,” says Morency. “If you don’t have the space or funding, you can still afford the look and best features of a playground on a modest budget.”

“When you help someone design a playground, you realize that we’re all really still kids at heart,” says Morency. “Playground planning is always about finding a balance between the ‘ideal playground’ and real world concerns about space and budget.”

“Parents tend to be concerned about exercise,” adds Morency, “so we see a lot of requests for fitness circuits—but the goal is to take equipment that’s already fun and arrange it into a design that promotes healthy activity,” he says. Like any reputable equipment company, BYO follows strict safety guidelines, using only materials approved by the ASTM and the International Play Equipment Manufacturers Association (IPEMA).

Proud explains another, perhaps unexpected, benefit derived from working with a professional: “Parents should know that play structures that enhance perceived risk are proven to contribute to a child’s well-being by providing valuable benefits and helping to reduce phobias,” he says. “Allowing children to confront and manage some risk outdoors can go far in helping to avoid everything from future risk aversion and the inability to make decisions to childhood obesity, decreased life expectancy, and disconnection from nature.”

Some of the playground structures Playworld Systems recommends to safely supply that sense of risk include LiveWire, a zip line that runs 60 feet from platform to ground, and DropZone, which looks like a fire-pole combined with an open-air elevator. Children climb a ladder, and then step on a small platform, which drops as they hold onto the pole.”

Proud explains another example of 21st century play equipment is NEOS, the world’s first outdoor electronic play system. NEOS combines aerobic exercise with the speed and dexterity demands of video games, delivering a fun-filled outdoor workout. There are a variety of versions to choose from, each featuring multiple game and player options. NEOS sounds like a program everyone, from children to adults, will enjoy.

Once a playground is installed there is also the issue of insurance, maintenance and liability. The property will generally carry the bulk of all three, so whether the whole project is executed by pros, or a combination of professionals and community volunteers, it is imperative to work with reputable manufacturers and installers. “Most manufacturers will offer a maintenance contract,” says Davis, “or some staff training on playground maintenance. This training can double the life of your play area.”

Anne Childers is a freelance writer and a frequent contributor to the Chicagoland Cooperator. Editorial Assistant Enjolie Esteve contributed to this article.