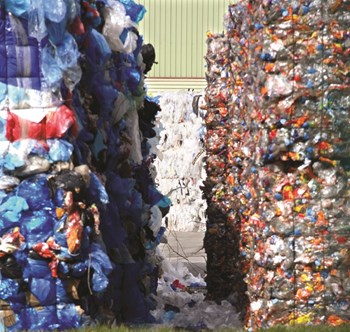 We as a culture produce a lot of trash—and not just in the form of reality television shows, late night infomercials  and bad romance novels. Whether it’s the candy wrappers we toss into the trash bins outside on the sidewalk, the  newspapers we take downstairs to the recycle bin, or half-eaten food we throw  down the convector chute, we dispose of tons of trash annually. But where does  it go from there? Put another way: how does Chicago take out its trash?

If you were marooned on an island, and you needed a system for throwing away  whatever trash you accumulated, you would probably wind up finding a hole,  throwing the refuse in, and subsequently, burying it. This is what Illinois—and every other state, for that matter—did for hundreds of years: they found big holes in the ground and tossed trash  in them. Stearns Quarry, once a gaping hole in the ground in Bridgeport, was one such  place.

Over time, two problems developed because of extensive landfill use. First, Chicago is a densely-populated city, where real estate is particularly  valuable; as landfills began to reach peak capacity, it was not feasible to  build new ones in the city limits. That’s the space problem.

The other issue is environmental. If your refuse is organic material like coffee grounds, banana peels and an old  pair of ripped socks, you can fill up a hole in the ground with a free  conscience. But when you start tossing in lead paint, crumbling asbestos tiles and toxic  chemicals, you run into serious problems.

Chicago’s solution then was to incinerate its trash. The Northwest Incinerator on North Kildare and Chicago Avenue was opened in  1971. The idea was to reduce waste—ash takes up ten percent of the landfill space solid waste would—and generate energy in one fell swoop. For awhile, the Northwest Incinerator was a smashing success. It reduced the waste by 90 percent—dumping it at Stearns Quarry—and generated enough excess power to sell it to the Brachs Candy factory. But this came with a cost. The Northwest Incinerator pumped “lead and other pollutants emitted from its double stacks onto nearby  neighborhoods, which were, for the most part, poor black communities,” reports activist Laurie Palmer in AREA Chicago. “In 1993, after over 20 years of operation, it was spitting out somewhere between  5 and 17 pounds of lead per hour from its stacks.”

In the early ‘90s, these revelations should not have come as a shock. “There were three other incinerators in the city at the time—Medill (Fullerton and Ashland), Calumet (103rd and Doty), and Southside (34th  and Lawndale), all of which were closed in the mid-1970s for violations of the  U.S. Environmental Protection Agency (EPA)’s particulate matter count,” Palmer reports. “Northwest kept going, apparently passing the tests that the others flunked.”

Eventually, amidst public outcry by a group with the Pynchonesque name  W.A.S.T.E., the Northwest Incinerator was found in violation of EPA  regulations, and in 1999, had to close and pay penalties. "This settlement holds the City of Chicago accountable for the pollution it  caused through operation of the Northwest Incinerator," Lois J. Schiffer,  Assistant Attorney General for Environment and Natural Resources at the Justice  Department, said at the time. "It also requires the city to undertake several  projects to address environmental problems in communities located near the  incinerator. That is good news for the people who live in and around Chicago,  and for our environment."

Indeed, Chicago has since been a model of green. Even the Stearns Quarry, for years a disgusting pile of burned-out ash from the  Northwest Incinerator, was transformed into a lovely city park three years ago.  Talk about recycling!

Generally speaking, solid waste—that is, the refuse you throw in the trash—winds up in one of three places: a landfill; a MRF (pronounced “murph”), material recycling facility; or a waste energy plant.

Chicago uses “single-stream” recycling. Recyclables are all mixed together in a collection truck, instead of  being sorted by material type (i.e. newspaper, plastic, glass, aluminum, etc.)  by the resident, according to the City of Chicago website. “Instead, the mixed or “commingled” recyclables are sorted at a processing center using technologies both old  (magnets, screens, conveyor belts) and new (air jets, infrared readers). The  individual commodities are then baled or bundled and sold to manufacturers, who  reprocess or refine the materials and to make “new” products.”

But the future lies in the third destination: the waste energy plant.

Illinois has about a dozen waste energy plants; there’s one in the Village of Robbins, in suburban Chicago. They are huge, and cost quite a bit of money to build; the capital is raised  through bond issues, as with ballparks and stadiums, and it can take a  generation or two to recoup the initial investment. But they do recoup the cost, and they are the wave of the future. A waste energy plant is, in layman’s terms, a fancy and extremely big incinerator. What happens is, waste is  brought to the facility and deposited into pits, where it is compacted, and  then moved by grappling hook into “fire boxes,” where it is burned. The massive heat makes steam, which activates turbines, which run generators,  which produce electricity. Waste energy plants produce enough power to be self-sustaining, and they  generally produce an excess of electricity, which flows to the grid.

‘It’s high-quality electricity,” says John Schert, the director of the Hinkley Center for Solid and Hazardous  Waste Management, based in Florida. These are not to be confused with the Northwest Incinerator. “These are very modern facilities that produce very little air pollution.”

The existing waste energy plants work quite well, but newer ones, which use  so-called mass burn technology to increase incinerator capacity to 1,000 tons a  day, are even more efficient.

And how does all of this impact a condominium? After all, once the garbage is  put on the curb, there’s not much any of us can do, right?

There are a few things. First, because condos tend to have communal collection and removal systems, it’s important that HOAs are on the same page. There are ways to recycle that are more effective than other ways.

Get on the Same Page

For example, in order to properly process recyclables, they have to be clean of  food matter, and they have to be properly sorted. Buildings that rely on chute  systems for trash removal can make the chutes more efficient.

This was made easier by the expansion last year of the blue cart recycling  system. Managed competition has lead in the last 12 months to an extension of recycling  services. The program is expected to reach all Chicago neighborhoods by 2013.

“I promised the people of Chicago that my administration would work to deliver  the best services in the most cost-effective way possible. Delivering our Blue  Cart recycling program at a lower cost to taxpayers is the first step in making  recycling collection available citywide,” Mayor Rahm Emanuel said when the program’s expansion was announced in 2011.

According to David DeRousse, director of business development at RSI Recycling  Services in Chicago, “the blue cart program is something that the city of Chicago runs—they have their own trucks to collect the material. They put out a separate  cart, next to your cart for trash. You’ll get a blue cart for recycling. You can mix your cans, your bottles and  plastic, glass, metal and any typical fiber products: office paper, newspapers,  junk mail, magazines, cardboard. It all goes into one container. And then that  material gets collected by a city truck and then they bring it to a sorting  facility where they separate everything,” he says.

The cost for the municipal program comes from taxes. “If you’re in Chicago and you’re a resident where they pick up your trash—there isn’t a cost. It’s included in your taxes. If you are in Chicago and you have a building that is  three units or less, the city will pick up your trash and recycling. If you’re in a building that’s four units or more, then you have to contract privately with a waste hauling  company, like ours, or a waste management company,” says DeRousse.

Private carters help out, DeRousse says. “The city actually has contracted out with some private companies in certain  wards. There’s 50 wards in Chicago and certain wards they have contracted with private  haulers to haul the material for them as a contracted fee. The vast majority of  it, though, is collected by city trucks.”

How can condos take advantage of the new systems? Art Reetz is the sales manager  for Nu-Recycling Technology in Naperville, a company that makes a specialized  chute system that organizes recyclables and trash with the click of a button.

“It’s based on a single chute,” he says. “There are control panels on every floor. You press the right button, and the trash goes down and is sorted.” This is not only a “green” idea; it saves time and money for the building, because the time-intensive  prospect of sorting trash in mechanized.

“Most recyclables do end up in the landfill,” Reetz says.

The problem of garbage disposal is not going away. It has challenged the capabilities of human beings since day one, and it will  continue to pose problems for our species and indeed the entire planet, as the  world population soars, as natural resources are used up, and as the nature of  what we’re throwing away changes. Those fancy lightbulbs? They will be a big environmental problem. Same with cell phones, printer cartridges, and the chemicals we keep inventing.

Fortunately, science is in the driver’s seat on this issue. Nu-Recycling is but one company on the vanguard. There are plenty more. There are also organizations like the pioneering Hinkley Center. The days of not  thinking about the environmental impact of garbage are behind us as the  environment is indeed on everyone’s mind these days. “We’re all garbologists,” Schert says. “We’re all interested.”

Greg Olear is a freelance writer and a frequent contributor to The Chicagoland  Cooperator. Staff Writer Christy Smith-Sloman contributed to this article.