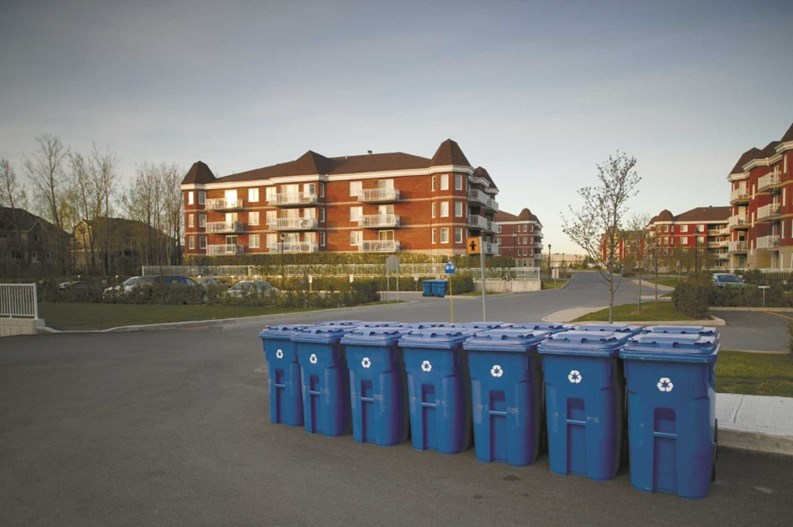 The Windy City talks a lot of trash, works with a lot of trash and deals with trash on every level on a daily basis. Any modern municipality, regardless of size, produces a lot of trash—and a huge metropolitan area like Chicago takes that production to another level.

The City of Chicago collects about 1.1 million tons of residential garbage and recyclable material each year from 600,000 households in single-family homes or apartment buildings of four units or fewer.

Debris from our meals, our projects, our newly acquired goods and wares, and just about everything else goes down the chute, in the can, or out on the sidewalk—but where does it go from there?

Where Does it All Go?

Municipalities have trucks, barges, and other means of transporting trash to its final destination, as well as a network of processing centers—a material recycling facility or MRF, that sorts, compacts, and otherwise prepares garbage for transport to yet other points, often unknown.

In Chicago, the trash world is changing, and there are entire organizations devoted to advocating and fighting for the new trash and recycling world. It’s important to understand where your trash and recycling goes—it affects your backyard, your planet and your pocketbook.

Once the garbage is collected—whether by the city or by a private company—it’s moved to a transfer station facility where the smaller garbage trucks tip their loads, says Bill Plunkett, spokesman for Waste Management in Chicago, which is a private garbage company serving Chicago and several dozen suburbs in the Chicago-area. From there, the trash is loaded onto semi-tractor trailers, and it’s hauled to landfills farther away from the city in downstate Indiana, Wisconsin and all over the surrounding states.

But here’s where the problem arises. “In the last three decades, it’s been more and more difficult to develop new landfills, and the older ones have been filled to capacity and have been closed,” Plunkett says.

Finding a new spot for a landfill is not so easy. If someone approached the alderman in your neighborhood about putting a landfill in the plot of land that’s been vacant for years and years, just waiting for something to come fill it, how do you think the neighborhood would respond?

“We have to deal with a ‘Not in my backyard' issues,” Plunkett says. Despite the fact that these landfills are economic development landmines for the people who have them, we recognize the challenges. It’s a many-year process to develop a new landfill, and there’s no guarantee that once you’ve invested in the project that it will meet approval.”

In Cook County, the possibility of creating a landfill is nil. In 2012, the Illinois House voted on a measure preventing new landfills from being created—or even expanding existing landfills inside Cook County. Not surprisingly, Gov. Pat Quinn approved the measure to make this a law, ending a long battle with activists and government officials on this issue.

So the not-so-new but still current question becomes: Where to put all that trash?

As time goes by, the trash continues to accumulate, and garbage officials are trying to think of creative ways to seduce residents into allowing them to create landfills in their neighborhoods.

Before creating a landfill in a county, the waste company and the county create a host agreement. For example, Plunkett says, Waste Management has a landfill in DeKalb County, and in 2008, they began a process to expand that landfill.

They established a limit of how much could be dumped, and—most importantly to the county and to the people who live there—determined an appropriate tipping fee, which is a price per ton that Waste Management pays to the county for the garbage that fills the landfill.

That’s not the only benefit to having a landfill in your backyard.

“There have been a number of advancements in the waste industry,” Plunkett says, explaining that some of those advancements directly affect those closest to landfills. Over the last several decades, companies have gotten very good at managing the disposal sites to protect the environment and to use the garbage to generate energy.

As waste decomposes in a landfill, it generates methane gas. When landfills are constructed today, they are constructed with a gas collection system that includes wells and pipes. The piping is able to vacuum the gas off the landfill and it can be used to generate electricity, Plunkett says.

“Waste Management uses it in almost all of its sites now,” he says. “One of the sites can power 2,000 homes.”

The landfills are also trying to be environmentally-friendly in other ways. Even if residents forget to recycle or choose not to recycle, the recycling automatically occurs in the plant so that recyclable material such as cardboard, plastic, aluminum and others don’t get dumped into landfills.

According to David DeRousse, director of business development at RSI Recycling Services in Chicago, “the blue cart program is something that the city of Chicago runs—they have their own trucks to collect the material. They put out a separate cart, next to your cart for trash. You’ll get a blue cart for recycling. You can mix your cans, your bottles and plastic, glass, metal and any typical fiber products: office paper, newspapers, junk mail, magazines, cardboard. It all goes into one container. And then that material gets collected by a city truck and then they bring it to a sorting facility where they separate everything,” he says.

The cost for the municipal program comes from taxes. “If you’re in Chicago and you’re a resident where they pick up your trash—there isn’t a cost. It’s included in your taxes. If you are in Chicago and you have a building that is three units or less, the city will pick up your trash and recycling. If you’re in a building that’s four units or more, then you have to contract privately with a waste hauling company, like ours, or a waste management company,” says DeRousse.

Private carters help out, DeRousse says. “The city actually has contracted out with some private companies in certain wards. There’s 50 wards in Chicago and certain wards they have contracted with private haulers to haul the material for them as a contracted fee. The vast majority of it, though, is collected by city trucks.”

However, there are problems with the blue bin recycling in Chicago that have yet to be conquered, says Adam Goldstein, founder of the nonprofit, Do the Right Thing Recycling, and board member on the Chicago Recycling Coalition. If they’re lucky, their home in Chicago will receive one lonely blue bin. And that’s only if they’re lucky.

“I have one, but my mother doesn’t,” Goldstein says. “It’s very random, and I don’t know how they’ve chosen to distribute them.”

No problem. So if you’re missing one, whom do you call to get one delivered? Or where do you pick up your blue box if you want to recycle?

“The only way to get a blue bin is to get your alderman to scream really loudly at City Hall to request blue bins for your neighborhood,” Goldstein says.

Despite the apparent severe shortage of blue bins, there is a city ordinance stating that everyone in the city of Chicago must recycle. But there is no compliance—so if residents of Chicago choose not to recycle because they don’t have a blue bin or because they don’t feel like sorting their cardboard, aluminum, plastics and other material from their trash, they won’t get punished—unlike most other major cities, where there is a fine for not recycling.

“It’s hard to conquer everything at once,” says Goldstein, who says that while there should be compliance measures, that right now his organization is focused first on getting the blue bins into every home in the city.

Offering blue bins to every single family and multi-family home in Chicago have been promised for many years by various officials leading back to the Daley administration, Goldstein says. Still, the city says that it’s working on the issue and continues to expand its recycling program.

In February, they handed out more than 131,000 blue cart recycling carts. The blue cart residential recycling program allows residents to leave their recyclable materials in areas separate from their garbage for designated recycling trucks so that they don’t get contaminated by their garbage.

That program was designed for residents in single family homes, two, three and four-flat buildings. It included 340,000 households in addition to the 260,000 households already receiving the blue cart recycling service.

“Chicago will no longer be a tale of two cities when it comes to recycling,” says Mayor Rahm Emanuel in a statement. “Adopting new strategies will allow us to expand blue cart recycling to every community in 2013, and residents will soon have greater access to recycling services, which will make Chicago a greener, more environmentally friendly city.”

In April, another 50,000 blue carts were promised to arrive in Chicago over the next five years via a $2.6 million grant by Coca-Cola and its philanthropic arm, The Coca-Cola Foundation.

Still, Goldstein says, the city isn’t even close to filling up with the blue bins and carts, so they’re practically decades behind other cities when it comes to recycling programs, which are dealing in yard waste and compost. While Chicago does has a yard waste and composting advocacy group which tries to get the city to haul waste and recycling and do natural compost, it’s in the background more than the more immediately pressing blue bin issue, he says.

Chicago is very green in other ways—there’s a strong emphasis on green building materials, on biking paths and on public transportation—but when it comes to recycling, they’re seriously lacking.

“Some of it is economics and some of it is will power. It’s hard to explain,” Goldstein says. “At this point, today, at this very moment, it’s a matter of economics. There are tough budget decisions, and people want to take shortcuts around it. While we’ve had the opportunities and we’ve had great economic growth, we scratch our heads and we see the improvements that New York and other cities have made, and we haven’t followed. Part of what we are trying to do is trying to identify the problem.”

For now, those who don’t have their own blue bins can drop off their recycling at Chicago’s designated drop-off spots.

After the city picks up all the recycling from the drop-off locations and from all the blue bins throughout the city (each suburb has its own system), they are taken to sorting facilities outside the city where they are broken down and shipped back to various manufacturers, some of which are in the United States, and some are in other countries, to be refurbished into new items.

So Chicago’s recycling system isn’t a complete failure. It just needs a little work and a lot more blue bins.