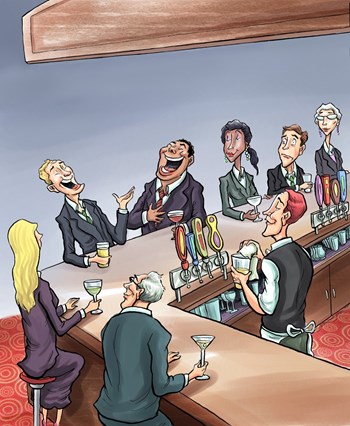 Along with property managers, attorneys may be keepers of some of the best  stories to come out of Chicagoland's condos and HOA communities. They hear and  see (and litigate) it all, from the crazy cat lady who diversifies into African  goat-rearing in her backyard to the suspected mobster who may—or may not?—be running a house of ill repute out of his condo apartment.

“The unit owner had a wife, too, but broke up with the girlfriend,” says Dickler, the principal of Dickler, Kahn, Slowikowski & Zavell, Ltd., in Arlington Heights. “The girlfriend wouldn’t move out of his other condo, so he stopped paying the assessments. We got an  eviction order, but she was unaware of it. When the sheriff showed up, she was  in a red negligee and the sheriff literally removed her from the premises in  the negligee. Kids gathered to see the nearly naked lady - and I got phone  calls from the board about upset mothers.”

Ultimately, the girlfriend disappeared and the owner sold the unit.

For Steven Welhouse, a partner at The Sterling Law Office in Chicago, finding a  unit owner became a true challenge. “We had one case when the unit owner had completely walked away from the unit and  we were forced to file suit for late fees,” says Welhouse.

Welhouse couldn’t locate the unit owner, so he was served by publication. “To serve by publication you put an ad-type listing in the Chicago Daily Law  Bulletin for three weeks and then he’s considered served,” explains Welhouse. “So we got the guy served by alternate means and within the required 60-day stay  period before possession could be taken of the unit, he came back and paid his  $25,000 in assessments. We have no idea where he was - and as long as he paid  his assessments, we didn’t ask.”

Robert M. Prince, Esq., an associate attorney with the firm of Tressler LLP in  Chicago, remembers a case of the unit owner who disappeared - and reappeared  when they least expected it. “We do collections for the associations and we had one case with co-owners who  were not related,” says Prince. “The attorney of one of the owners tells us that the other owner was deceased and  we even produced a death certificate for him, but during the second court  appearance he walked in and introduced himself. It ended up being just a big  misunderstanding, but it was funny. You can’t make this stuff up.”

About six months ago, a case was filed against an owner who was violating her  condo agreement by having wood floors in her unit. A proponent of environmental  regulation, she set out to prove that pesticides she claimed were being used on  the property were hurting her 20-plus year old son, even though it had nothing  to do with the reason the case was filed. “Management wasn’t using pesticides, but she brought her son in the courtroom in a wheelchair,” says Prince incredulously.

“The case was thrown out - and right in front of the judge, the son got up out of  the wheelchair and walked out of the courtroom!”

What’s in a Name?

Less than six months ago, Prince was working on another case with a co-owner who  had an unusual name. “We have to talk to the owners before talking to the judge and I talked to him in  the hallway,” says Prince. “We reviewed what he wants to do with the house and he leaves to go to work. I  continue the case and in walks someone else with the exact same name who lived  at the association. The first guy had been in foreclosure and seen his name  online in a court case and thought he should come in. He never came back.”

Another unit owner, a man from Israel, screened in his deck to protect him from  mosquitoes – against condo rules. “In court, his defense was that he was allergic to mosquito bites,” says Dickler. “But we found out that he lived in a hut on the West Bank and there was no  history of medical problems” from bugs. The case took six months to finish, resulting in that the unit owner  was required to remove the screens and Dickler’s firm was paid significant costs in attorneys’ fees.

Not all cases are funny. “In one heart-wrenching case, we had to evict a unit owner for failure to pay his  assessments,” says Dickler. “The man who was doing the eviction called me to tell me it was the worst day of  his life. The father and son were outside and the five-year-old boy came up to  him and asked if it was okay to take his teddy bear off the stack of stuff that  they were putting on the street. The evictor was crying.”

Fortunately, within an hour the father had paid the balance and he and the  little boy moved back in. “You never know where they are going to get the money, because we never ask,” says Dickler.

In a case of the ridiculous, one unit owner failed to pay a $75 special  assessment that ended up costing her $35,000 in legal fees. “She was the treasurer on the board and she voted for the assessment too,” says Dickler. “It resulted in a week-and-a-half long jury trial and she had off-the-wall  attorneys who encouraged her to keep going and kept digging her in the hole  deeper.”

Ultimately, the treasurer filed two bankruptcies and appealed the case twice,  but lost the unit and was charged $35,000 in legal fees.

Jim A. Slowikowski, another principal in Dickler, Kahn, Slowikowski & Zavell, remembers a similar unit owner who put up a bird-feeder on his property  against the association rules and ended up paying dearly. “The board asked him to take the bird-feeder down because it was on the fourth  floor balcony and the poop would rain down on the other balconies,” says Slowikowski.

The board begged the owner to remove the bird-feeder and, when that failed,  hired his firm to get an injunction. In the end, the owner lost his case, and  was charged $10,000 in legal fees. “If you litigate, it’s going to cost you money,” he says.

And then there was the rental unit with coach lights that were required to be  on, but they weren’t working. The tenant claimed they were broken and he refused to fix them.  Management sent a maintenance crew that were able to fix the problem. “The tenant was billed the $48 repair bill, but refused to pay it,” says Dickler. The case went to a bench trial, the tenant lost and was billed a  whopping $6,000 in legal fees. An expensive repair bill to say the least.

Mark D. Pearlstein, a partner at the law firm of Levenfeld & Pearlstein, LLC in Chicago has been a practicing condo law attorney for 35  years. When asked for his favorite court case, he didn’t hesitate to talk about the time when the key witness in a condo case was...a  window.

“About 12 years ago, the case involved a board of a 600-plus unit building that  wanted to replace the windows in the building due to an emergency,” says Pearlstein. “The windows deteriorated and leaked and, in one instance, blew into a unit and  landed on the couch in the living room. For years, this building was a divided  camp between those who believed the windows should be replaced and those who  were opposed because of the cost.”

The board filed suit to get a court order to replace the windows. “The key moment was the testimony of the window,” says Pearlstein. “We trucked the window over, through the loading dock and up 25 flights into the  courtroom and put it on the witness stand. We had an engineer testify why this  window had to be replaced and it was telling testimony because of the window’s deterioration and oxidation. The color was so pronounced that actually seeing  the window in this form was the most persuasive factor to the judge. He ordered  the massive replacement of the windows over the objection of the owners.”

Pearlstein sums up the wackiness of the courtroom by saying, “The longer you’re in the business, the less you’re amazed.”