Do not show again [X]
By Debra A. Estock   2015 February Community Building 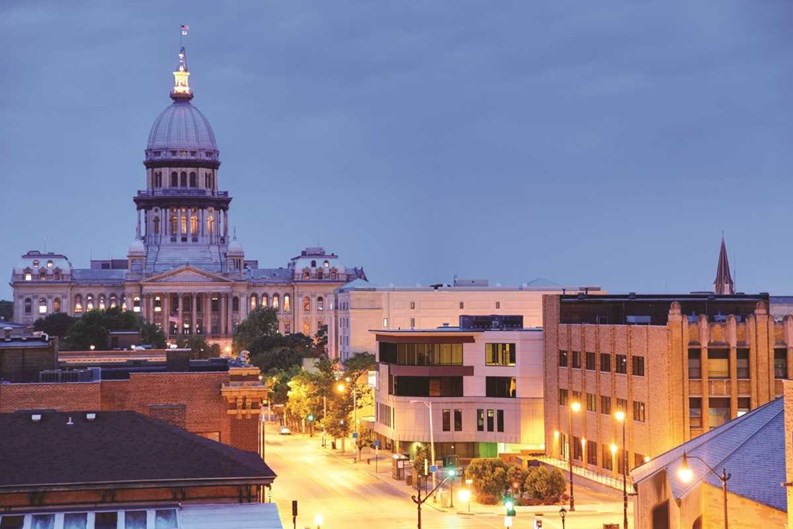 The capital of the state of Illinois and the county seat of Sangamon County, Springfield is perhaps best known as the place where President Abraham Lincoln lived, became a prairie lawyer and held political office.

With a population of 116,250, as of the 2010 U.S. Census, Springfield is the sixth most populated city in the state and the largest city in central Illinois. Springfield was Lincoln’s hometown from 1837 until 1861, when he was elected to the White House as the 16th President. Many major tourist attractions and historic sites connected with Lincoln are located there. Poet Vachel Lindsay also lived and died here.

Present-day Springfield was first settled by European Americans in the late 1810s, just around the same time that Illinois gained statehood. The city originally named itself after Senator John C. Calhoun, a prominent politician from South Carolina, who was the country’s seventh vice president as well as secretary of war and secretary of state.

But by 1832, as Calhoun fell out of favor with the Democratic party and the public by virtue of his support of slavery and southern secession, the town was renamed Springfield, after Springfield, Massachusetts, which at the time was known for its progressive stances and industrial innovation.

Springfield wasn’t always the state capital. Kaskaskia was actually the first capital of the Illinois Territory from its organization in 1809, continuing through statehood in 1818, and through its first year as a state in 1819. Vandalia was the second state capital, serving as such from 1819 to 1839 and Springfield became the third and current capital of Illinois that same year, due perhaps to Lincoln’s influence in the region.

It turns out that the land that Springfield currently occupies was first settled by trappers and traders, who found the fertile land and water access around the Sangamon River very beneficial. The settlement's first cabin, built in 1820 by John Kelly, stood at what is now the northwest corner of Second Street and Jefferson Street.

The Influence of Lincoln

The Kentucky-born Lincoln arrived in the Springfield area in 1831 and became a permanent resident in 1837, when his legal practice and political career began to take off. He began his legal studies during six years in New Salem, he joined the state militia and was subsequently elected to the Illinois General Assembly. One of the nation’s great orators, Lincoln delivered his famous Lyceum address in Springfield.

Springfield became a center of activity during the Civil War, and after the war was over in 1865, the city became a major hub in the Illinois railroad system. In addition to politics and farming, coal mining was a major industry for Springfield by the early 1900s. Lake Springfield, a large artificial lake owned by the City Water, Light & Power company (CWLP), supplies the city with recreation and drinking water. Weather is fairly typical for middle latitude locations, with hot summers and cold winters. Spring and summer weather is like that of most Midwestern cities; severe thunderstorms are common. Tornadoes hit the Springfield area in 1957 and 2006.

The city is governed by a mayor–council form of government but the major governmental entity, of course, is the state government and seat of the legislature. As the capital, many government institutions located here include the Illinois General Assembly, the Illinois Supreme Court and the Office of the Governor of Illinois. There are three public and three private high schools in Springfield. The economy of Springfield is primarily marked by government jobs, which account for a large percentage of the city's workforce.

As far as neighborhoods, there are at least 20 distinctly designated ones but not all are aligned with neighborhood associations. These include the Benedictine District, Bunn Park, the Cabbage Patch, Downtown, Eastsview, Enos Park, Glen Aire, Harvard Park, Hawthorne Place, Historic West Side, Laketown, Lincoln Park, Mather and Wells, Medical District, Near South, Northgate, Oak Ridge, Old Aristocracy Hill, Pillsbury District, Shalom, Springfield Lakeshore, Toronto, Twin Lakes, UIS Campus, Victoria Lake, Vinegar Hill, and the Westchester neighborhoods. The Lincoln Park neighborhood is an area bordered by Third Street on its west, Black Avenue on the north, Eighth Street on the east and North Grand Avenue. The neighborhood is not far from Lincoln's Tomb on Monument Avenue. Springfield also encompasses four different suburban villages that have their own municipal governments; including Jerome, Leland Grove, Southern View and Grandview.

Conveniently located between St. Louis, Missouri and Chicago, Springfield is known for the Cozy Dog (corn dog on a stick) and horseshoe sandwiches, has great restaurants and an arts and culture scene. With a population of about 117,000, Springfield also boasts a wildlife sanctuary, zoo, memorial gardens, botanical gardens, and the world’s largest carillon. The area’s largest amusement park, Knight’s Action Park and Caribbean Water Park, is located here.

Shopping enthusiasts come from all over the area to central Illinois’ largest enclosed shopping facility, White Oaks Mall, and to the specialty shops in Springfield’s downtown historic district.

So if you’re looking for a place to call home, maybe Lincoln’s hometown might just fit the bill.