Do not show again [X]
By Debra A. Estock   2015 March Community Building 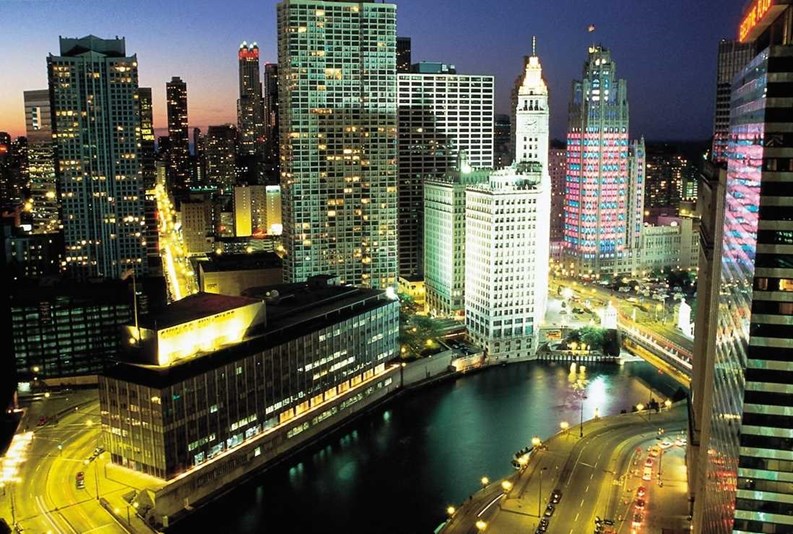 The Near North Side, or Community Area 8, is one mile north of The Loop and practically defines what is known today as Chicago, Illinois. It is home to the city’s largest skyscraper, the Willis Tower, (nee the Sears Tower), and the largest population grouping within the city. It is one of the 77 defined communities of the City of Chicago and one of four denoting Downtown. The others being the Near West Side, Near South Side, and the Loop. All are located south of the Near North Side.

The community itself is located north and east of the Chicago River. In fact, the three edges of the Near North Side are surrounded by water, with the boundaries being the Chicago River and Lake Michigan. How Chicagoans use these bodies of water divided the Near North into an expensive residential strip in the east, and an industrial, low-income area in the west.

A residential and commercial corridor eventually grew up around Clark Street, serving as a buffer between the two. In comparison to the other downtown community areas, the Near North Side has the second largest total area (after the Near West Side) and a population count with 80,484 people as of the 2010 U.S. Census. With the exception of Goose Island (an actual island on the Chicago River) and Cabrini–Green on the west, the Near North Side is known for its extreme affluence, typified by the Magnificent Mile, the Gold Coast, the Navy Pier and its famous architectural treasures—its skyscrapers.

Chicago’s North Side (an area that extends north of downtown and the Chicago River) is the most densely populated residential section of the city, bar none, with considerable middle and upper-class residents. It also contains public parkland (i.e., Lincoln Park) and beaches stretching for miles along Lake Michigan to the city's northern border. Eastern Europeans and other population groups settled here as numerous residential high-rises sprung up to line the eastern side of the North Side along the waterfront. The North Side is noted as the home of the Chicago Cubs, based at Wrigley Field.

Early History and the Mansions

In the 1780s, in what is now the Near North Side, on the northern banks of the Chicago River near today's Michigan Avenue Bridge, Jean Baptiste Point du Sable built the first known permanent settlement in "Eschecagou." Today, this is marked by Pioneer Court.

The Great Chicago Fire in 1871, unfortunately, destroyed most of the main structures on the Near North Side. This led to major rebuilding. Potter and Bertha Palmer decided to build their mansion along the future site of Lake Shore Drive. This started a chain reaction among the affluent to follow suit as the rich began acquiring the land that made up the neighborhood. Fashionable Chicagoans moved from Prairie Avenue and built mansions facing the lake, spreading out along Astor Street. McCormickville, in the vicinity of Rush and Erie Street, is so named because it is here where many branches of the famous McCormick family of mechanical reaper fame built their mansions in the late 19th and early 20th centuries.

The years following the Great Depression shifted the balance between the wealthy and the impoverished in the Near North Side. The first attempt at public housing in the western part of the neighborhood led to the development of the Frances Cabrini Homes and William Green Homes. Eventually, this formed a new neighborhood called Cabrini-Green.

Despite these two developments, the promise of widespread public housing in Chicago never materialized, and Cabrini-Green became a nationwide symbol of the crime, violence, and gang activity that supposedly characterized housing projects in general. Eventually, the majority of the housing project was torn down. Only a small section of row houses built in the 1940s remains.

Today, housing in the Near North Side has changed from mansions and public housing to rentals, condos, townhouses, and single family housing. Life in the Near North Side is made up of a predominately single, older affluent crowd than in most Chicago neighborhoods. Families with children make up less than 5% of this community area as much of the housing stock is centered in studios and two-bedroom apartments. Great shopping, nightlife and bars dot the neighborhood as shops along Michigan Avenue, Rush Street, Oak Street and State Street are within easy walking distance. As far as new construction goes, most is of the condo variety. A number of rentals recently converted to condos, as well, due to demand.

Wrigley and Other Attractions

Although the Chicago Cubs haven’t won baseball’s top prize in over a century, and everyone knows the story of the Billy Goat curse, Northsiders can’t get enough of their beloved Cubbies. The ivy-laden Wrigley Field was built in 1914 and has been home to the Cubs since 1916. The Cubs’ history of losing is legendary, but they have played in a World Series ten times (the last in 1945).

Current owners, the Ricketts family, are in the middle of a $575 million renovation of the baseball park, which is drawing some flak from the owners of the famous outfield rooftop seats who believe that the new digital scoreboards and advertising placards will block their views.

Downtown is typified by the Gold Coast area, which contains many of the Windy City’s main attractions. The Gold Coast is home to a number of landmark high-rise apartment buildings along Lake Shore Drive, facing Lake Michigan, and low-rise residential blocks, inland.

River North, home to many luxury condo communities, and Streeterville, where the Navy Pier (one of the city’s most popular tourist attractions) is located, are within the Near North Side boundaries, also.

You can’t go wrong with the Near North Side; it’s near the best of everything Chicago has to offer.