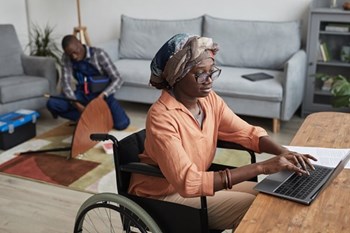 The idea that ‘form follows function’ is one of the basic concepts underlying nearly every design discipline—but function for whom? For many people living with disabilities, it often seems that ‘function’ covers a very narrow range of ability—rendering many forms clumsy at best, and completely useless at worst. While a cascading stairway might provide drama to a public space, for example, it may present an insurmountable obstacle to anyone making use of a wheelchair or other mobility aid.

While in the past accessibility for differently-abled individuals may have been an afterthought (if it was a thought at all), in recent years, architects and designers have begun to change their view of how to best achieve form and function for everyone, regardless of age or ability. Two key drivers of that change were the adaptation of the theory of Universal Design, and the passage and implementation of the Americans with Disabilities Act (ADA).

“Universal Design was developed in 1997,” says Eric Cohen, senior associate principal at Ethelind Coblin Architect, an architecture and design firm based in New York City with clients in Chicago and elsewhere around the country. “It was the brainchild of a working group of architects, product designers, engineers, and environmental design researchers led by Ronald Mace at North Carolina State University. Universal Design is the design and composition of an environment so that it can be accessed, understood, and used to the greatest extent possible by all people regardless of their age, size, and ability. It is a fundamental process of good design.”

Cohen goes on to explain that there are seven principles of Universal Design: equitable use, flexibility in use, simple and intuitive use, perceptible information, tolerance for error, low physical effort, size and space for approach and use. Taken together and applied, these principles ensure that an environment can be used in the most independent and natural way, in the widest possible range of situations, by the broadest array of users, without special adaptation, modification, or specialized solutions. They can be applied to evaluate existing designs, to guide new ones, or to educate designers and consumers.

Jonathan Baron, principal of Manhattan-based Jonathan Baron Interiors, who has also worked in Chicago and around the country, explains the movement in simple terms. “The concept came out of architects’ and interior designers’ concerns about meeting the needs of everyone, including mildly to severely disabled people. Something as simple as a cane or walker would have access to any space from a kitchen or bath to common areas such as lobbies and hallways. In the early 1990s this became a trend. It was the moment where the design industry took on the moral and ethical responsibility of this challenge. We weren’t going to design just anything, anymore. It’s about ‘comfortable’ use. Form follows function. It is a commitment to meet the needs of everyone.”

Universal Design is a movement—not a federal statute or mandatory code. The ADA, on the other hand, is the law. Baron explains that the Americans with Disabilities Act was passed and signed into law in July 1990 by then President George H.W. Bush. ADA compliance enforcement followed, with failure to meet the new requirements resulting in costly legal action. Failing to make spaces and facilities accessible to those with disabilities was considered discriminatory.

Of course, the tenets of Universal Design incorporate the same principles and values enshrined in the ADA—and according to Cohen, architects and designers integrate Universal Design and the ADA requirements all the time. “We use codes as a guide for compliance with agencies having jurisdiction but make the process specific to the location and client,” he says. “It is not a one-size-fits-all approach. We start by understanding the users and asking questions about what they find most challenging. We talk to residents as well as staff. Some of this happens by asking, and some by observing.”