Do not show again [X]
By Maggie Puniewska   2012 April Neighborhoods 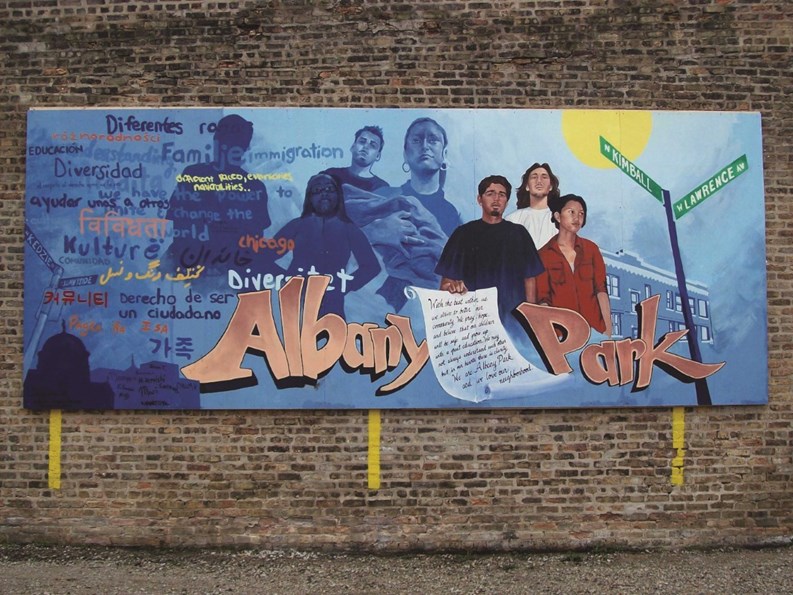 One of Chicago's greatest assets is its diversity, exemplified in the multitude of ethnic communities such as Polonia Triangle, Chinatown, Little Italy and Greektown. Although there may be a predominant cultural group in each neighborhood, each is populated with a multitude of other nationalities, resulting in a medley of cultures.

Albany Park, located on Chicago's northwest side is one of the most ethnically-diverse neighborhoods in the city. The Middle Eastern bakeries alongside Swedish restaurants and Spanish bodegas illustrate how in this neighborhood, the various ethnic subcultures are inclusive but also encouraged to embrace and cultivate their individual traditions and customs.

A 2008 study by the School of Public Service Policy Study at DePaul University in Chicago determined that Albany Park is the fifth most diverse neighborhood in the city in terms of ethnicity, income and age diversity and that 58% of the population is foreign-born. Over 40 different languages are spoken in its public schools. The many cultures create a rich and thriving community, a global palette of restaurants and specialty shops that contribute to a unique and constantly changing neighborhood.

From Farm to City

As most Chicago neighborhoods, Albany Park began as a homogenized, European farm settlement in the 1800s. In 1868, local entrepreneur Richard Rusk transformed a 10-acre investment into a large farm including a brickyard along the Chicago River and a racetrack. In 1889, the city annexed the area, and then six years later, a group of affluent investors purchased 640 acres of the farm to build a development. The team included streetcar magnate DeLancy Louderback, John J. Mitchell of Illinois Trust and Savings Bank, Northwestern Elevated Railroad owner Clarence Buckingham, and transportation mogul Charles T. Yerkes. The settlement was named Albany after the Louderback's hometown of Albany, New York.

While horse and by foot were the preferred methods of transportation during that time, the investors wasted no time in upgrading the way residents got around. The group of savvy businessmen purchased several transportation lines that were pivotal in establishing the area's first and expansive public commuting system with electric streetcars running along Lawrence Avenue between Broadway and Milwaukee. Beginning in 1904, the Chicago Sanitary District widened and straightened the meandering north branch of the Chicago River from Belmont to Lawrence Avenues, improving sewage disposal and giving more definition to property lines. A key point in improving commuting was the extension of the Ravenswood Elevated train to Kimball and Lawrence by 1907. In order to further improve transportation, the Kedzie line was extended in 1913.

A more reliable and advanced transportation system in Albany Park was the catalyst of a building boom, particularly at the intersection of Lawrence and Kimball Avenues. Small shops, diners and theaters sprouted up along the intersection—battling to attract residential spending and take advantage of the low commercial real estate prices. According to Albany Park's Chamber of Commerce, in 1909 land sold at $52 per front foot but in 1929, this price blew up, going for $2,750 per front foot. Residential builders constructed hundreds of family homes from traditional Chicago bungalows to multi-family apartments and townhomes. German and Swedish immigrants initially settled in Albany Park and in the 1920s and it also became a popular neighborhood for Russian Jews. In the 1940s, Albany Park's expansion continued to flourish as several public schools, synagogues, churches and public parks were opened.

In the decades that followed, Albany Park experienced a lull and minor decline as city-slickers escaped to the suburbs. Homes and stores were vacated and property values decreased. Lawrence and Kimball, once a thriving commercial hub, saw 70 percent of its stores and homes vacant. Relief came in 1978 when city government, the North River Commission, and the Lawrence Avenue Development Corporation cooperated to improve Albany Park's appearance. Albany Park's renewal included streetscape beautification, a Facade Rebate Program, low-interest loans, and other financing packages.

It wasn't until the 1970s when immigrants were once again attracted to Albany Park's low prices, close proximity to the city and slower-paced familial environment. Many Asian and Latin American immigrants came to reside in Albany Park. In 1990, the community area claimed the largest numbers of Korean, Filipino, and Guatemalan immigrants in Chicago. The Korean community also greatly contributed to the commercial and civic revitalization of the area.

Today, the population of Albany Park continues to be a multi-cultural mix. A substantial number of residents hail from Mexico and Guatemala and there are still large numbers of Asian immigrants from Korea, Cambodia, India and the Philippines. In the 1990s, there was also a heavy influx of Europeans from Serbia, Croatia, Bosnia and Romania. Recently, the neighborhood has seen an increase in residents from Pakistan, Somalia, Lebanon and Iraq. With literally all corners of the globe covered, it is no surprise that Albany Park is in the top five most diverse neighborhoods in the city.

With such an influx of immigrants from all around the world, each group forms the gastronomical landscape of Albany Park. There are very few places in the world where you can eat a tostada, followed by dim sum and conclude your meal with baklava all within 20 steps of each other. There is no need to travel to different neighborhoods to sample delicious cuisine from literally every continent.

Tre Kronor, a Swedish restaurant that has been in the neighborhood since 1992 serves up traditional Nordic cuisine such as salmon and cod, meatballs and pickled herring. The Norwegian and Swedish owners are a couple whose frequent trips back home infuse the dishes with genuine Scandinavian flavor and serve as an inspiration for the menu. Tre Kronor is located on Foster Avenue between Kedzie and Kimball.

Just a few streets down on Foster Avenue is Beijo de Chocolat, where French pastry chef Laura Case crafts delicious chocolate concoctions with brigadeiros, an extremely popular Brazilian chocolate. Chocolate appreciators and choco-philes can indulge in hundreds of sweets such as the traditional and award-winning dark or milk chocolate brigadeiros, rum raisin, cappuccino and white chocolate mint truffles as well as turtles, peanut butter cups and fleur de sel caramel. Besides chocolate, Beijo also has a large selection of pastries, cupcakes and muffins to indulge your sweet tooth. Korean cuisine is also very prominent in Albany Park, which has been dubbed the “Koreatown” of Chicago. The must-sample of Korean cuisine is Ssyal Ginseng House on 421 Lawrence Avenue. There, the traditional sam gye-tang (ginseng chicken soup) is hailed by locals to cure colds, strengthen the immune system and add more energy and vitality. The soup consists of a Cornish game hen which is stuffed with rice, dates, garlic and of course, ginseng, which is believed to have many nutritional and medicinal properties. The poultry is boiled in a ginger and ginseng broth and served with rice and an assortment of vegetables. Definitely worth a try for any foodies out there.

The majority of Korean shops in Albany Park can be found on Lawrence Avenue between Kedzie and Pulaski. This particular section of Lawrence Avenue has been officially nicknamed by the city of Chicago as "Seoul Drive" because of the multitude of Korean-owned enterprises on the street, which make up a whopping 45% of the businesses on Lawrence. The neighborhood boasts an annual Korean festival, a television and radio station as well as two Korean newspapers.

To celebrate its culinary diversity each year Albany Park hosts Bon APpetit (AP, the clever acronym for Albany Park), featuring a restaurant crawl during which residents are able to sample local cuisine. Last year 20 establishments participated in the one-night event hosted by the Albany Chamber of Commerce and North River Commission. This year's third annual crawl is scheduled to take place in May. For more information on the crawl and venues, visit the Chamber of Commerce website, www.albanyparkchamber.org.

Maggie Puniewska is an editorial assistant for The Chicagoland Cooperator and other publications.