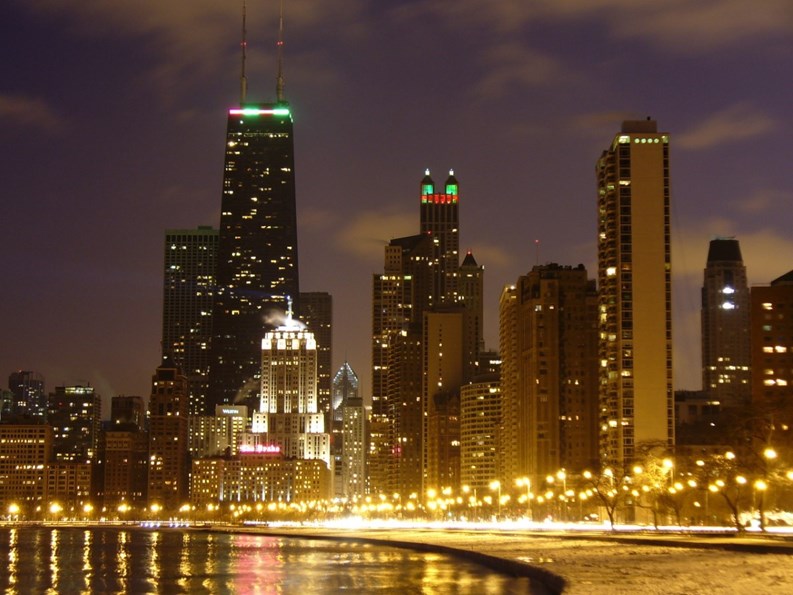 Having the same cachet as Manhattan’s Upper East Side, Chicago’s Gold Coast is as affluent as its name suggests: it is the wealthiest  residential neighborhood in the Windy City.

The landmarked neighborhood for the super-rich got its start back in 1882  (shortly after the great Chicago Fire) when State Street dry goods merchant and  hotelier Potter Palmer and his wife Bertha, built a fairytale-like castle on a  block at 1350 North Lake Shore Drive.

Architects Henry Ives Cobb and Charles Frost designed the castle, which was  completed around 1887, at a cost totaling more than $1 million dollars. The  42-room mansion featured a three-story Italianate central hall while other  rooms were furnished in many historic styles: a Louis XVI salon, an Indian  room, an Ottoman parlor, a Renaissance library, a Spanish music room, an  English dining room that could seat fifty, and a Moorish room with  perfume-scented rugs. Paintings, collected by Bertha Palmer, graced the  mansion's grand 75-foot-long ballroom, and its exterior was adorned by dozens  of turrets and minarets reminiscent of a Bavarian castle. Kings, presidents and  the finest in high society were entertained there in its heyday.

Over the next few decades, Chicago's elite gradually migrated from South Prairie  Avenue to new homes north of the Loop. Today, the neighborhood is a mixture of  mansions, row houses, and high-rise apartments. The Palmer Mansion was  demolished in 1950 to build a block of apartment buildings but some of the  other mansions and townhouses remain (including the historic Charnley-Persky  House). The district was added to the National Register of Historic Places in  1978.

The Gold Coast features many high-rise apartment buildings on Lake Shore Drive,  facing Lake Michigan, and mostly low rise residences inland. As with many  neighborhoods, its exact borders tend to be disputed but, generally they extend  from North Avenue, south, to Division Street and west to Clark Street; and, it  also includes the areas east of State Street, south, to Oak Street and east of  Michigan Avenue, south, to Walton Place. According to the latest data from the  Chicago Association of Realtors, the average home price in the area ranges from  about $680,000 to around $2 million.

An iconic pair of glass-and-steel apartment towers at 860-880 Lake Shore Drive  along Lake Michigan received city landmark status in June 1996 and were added  to the National Register of Historic Places on August 28, 1980. Designed by  famous architect Ludwig Mies van der Rohe, the 26 floor, 254-foot-tall towers  are called the "Glass House" apartments. The design principles used here were  copied so extensively they are now considered characteristic of the modern  International style of high-tech architecture.

Not loved at the time they were built, the towers went on to become the  prototype for steel and glass skyscrapers worldwide. The 860-880 Lake Shore  Drive Apartments embody the spirit of Modernist architecture with their  verticality, steel grids, glass curtain walls, and lack of ornamentation. Mies,  a master of minimalist composition, believed “less is more” and demonstrated it in his self-proclaimed “skin and bones” architecture.

And the Gold Coast is home to one of the most famous shopping areas in the  world. The Magnificent Mile (predominantly centered around Michigan Avenue)  contains a mixture of upscale department stores, restaurants, luxury retailers,  residential and commercial buildings, financial services companies and hotels,  and caters primarily to tourists and the affluent. The area also has a high  concentration of the city's major media firms, such as the Chicago Tribune  newspaper, PR firms and advertising agencies. The Magnificent Mile includes  3,100,000 square feet of retail space, 460 stores, 275 restaurants, 51 hotels,  and a host of sightseeing and entertainment attractions that draw in more than  22 million visitors annually.

Major attractions in the district include the Navy Pier, which contains an  amusement park and convention center, the John Hancock Building, and the Old  Water Tower. The John Hancock building, which stands 100 stories tall and is a  dominant part of Chicago’s skyline, is instantly recognizable by locals and non-locals alike. The  building contains offices, condominiums and restaurants; the 95th floor houses  The Signature Room, an upscale restaurant that offers city views as well as  Lake Michigan. There is an observation deck on the 94th floor as well. The  Chicago Water Tower (one of only two structures to survive during the 1871  fire) is the second-oldest water tower in the United States, after the  Louisville Water Tower in Louisville, Kentucky.

Many fine restaurants also can be found in the area, primarily in the vicinity  of Michigan Avenue, State and Rush streets. Morton’s the Steakhouse, Carmine’s, NoMi, Gibsons Bar, Mike Ditka’s and Tavern on Rush are among the Zagat’s rated culinary establishments.