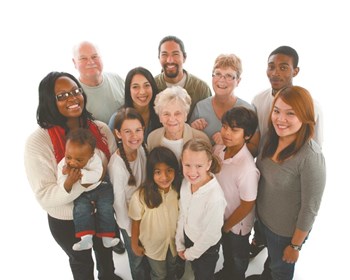 Chicago has a long tradition of being culturally diverse, and that tradition  continues to evolve today.

“In Chicago, we are very fortunate to have a constant flow of new cultures into  our city,” says Teresa McCauley-Coleman, a broker associate with City Net Realty, who does  a great deal of business in the landmark district of Ukranian Village. “We have multi-generational communities as well. Condos help successive  generations to continue participating in their community, as well as stay or  move to another community to share their cultural traditions.”

Property managers and boards can do a lot to cultivate and maintain a strong  sense of community in a condo or association as demographics change over time,  whether the shift is generational, ethnic, or socioeconomic. This includes  everything from acknowledging holidays, being sensitive to different cultures,  and working to improve everyday communication and interaction among all  residents.

“I live on the west side of Chicago in a very diverse area," says Mabel Guzman,  president of the Chicago Association of Realtors (CAR), "and I expect diversity  in the city. Condos allow access to all—if you can pay for your assessment, you can live here. People need to work on  getting along and embracing the diversity that we share.”

Living in a condo or co-op community is very different from living in a  single-family home or a rental building, and many—if not most—new condo owners need a period of adjustment to get used to the "condo  lifestyle." Things like house rules, maintenance fees, and upstairs neighbors  can be sources of friction for any newcomer, but when the newcomer is coming  from another country or culture, it may take more time—and sensitivity on the part of building administrators—for them to understand and buy into their new community's protocols.

“[Newcomers] from other countries or cultures often mistake rules and regulations  for dominance," says Angela Falzone, a consultant with Chicago-based  Association Advocates Inc. “Something they may have lived with in the governing bodies of their homeland,  and they may feel they're being forced into actions. They have a belief  structure of ‘freedom’ and sometimes believe that rules work against the American way of free living,” she says.

Each case is different, Falzone says, but a good manager will move slowly and  work closely with these residents to help them understand that the processes in  place are for the safety and well being of them, their family, and their  neighbors.

But that's not to say that everything is cast in stone, that rules are rules  forever, or that adjustments can't be made as a community grows and changes. A  mid- or high-rise condo building might not have a picket fence around it, but  any good condo or homeowners association will run as if it’s a neighborhood. That’s why when new people come in and suggest reasonable changes, it's in everyone's  interest to give them respect and consideration.

“When anything arises concerning a change to the building, it should be addressed  at the board level,” says Guzman, who is also president of business development and sales for  Envision Real Estate, LLC, based in Chicago. “How the community gets along is largely based on order and structure from the  board. For any important issues, the concerned residents should go before [the  board] to discuss their thoughts and have their voices heard."

A management company may also offer advice on changes to rules, policies, and  other administrative or amenity-related issues if they feel it's something that  will help the community run more smoothly and harmoniously.

“Maybe a board member notes that more Latinos are moving into a building, so they  want to switch to bilingual signage,” Guzman says. “That's great, but the important thing is that you have to be finite. There are  fair housing laws that you have to follow.” That means, she says, that if there are three different languages spoken in  your building and you make the changes for one, you may have to do it for all  three.

But what if it's not three languages—what if it's six, or eight? Those could be some pretty big signs. Depending on  the demographics of your building or association, it might not be practical or  financially feasible to replace every piece of signage on the property to  include every language spoken there.

“That’s where your management company can come in and help," says Guzman, "because  they understand the laws and can educate the residents and boards so you don’t open yourself up to legal issues."

There are plenty of benefits to having a wide range of ages and stages of life  represented in a condo or homeowners association—but mixing generations isn’t always easy. Consider for example a teenager skateboarding in the hall and  nearly toppling a senior resident who is trying to make his way to the  elevator. It’s important that there are rules set up to deal with a situation like this  before things get out of hand and it becomes an old-guard-versus-newcomers  standoff.

Some buildings have added kids clubs for children so they have a special space  of their own away from the adults and older members of the condo.

“I have seen many associations set up a separate space for kids to go to hang  out," Guzman says. "It alleviates the stress of kids being around the clubhouse  or hallways. By not ignoring the children and letting them know they are part  of this community and have a space where they can interact and have a good  time, I believe it’s the best approach.”

Plus, the combination of old and young often makes for a stronger building.

“I believe that a healthy community is a multi-generational community," says  McCauley-Coleman. "Each generation has a huge contribution to give. In Chicago,  with neighborhoods changing and/or coming back or being redeveloped, it's  wonderful to see empty nesters buying condos in the same area as Generation X  or Y. I think part of it is that retirement has a very different definition  than it did 20 or 30 years ago.”

Yes, We Can All Get Along

“When I refer to diversity, it is not just ethnic; it is also economic,” McCauley-Coleman says. “Everyone comes from different backgrounds and either they will help divide or  they will help unify. Now we are seeing foreclosures, short sales, FHA  financing, etc. occurring and that is all affecting the resale value of  everyone in the building as well as the community.”

Somewhat surprisingly, culture clashes in condo buildings and HOAs are not as  big an issue as one might think. In fact, most of the experts quoted here say  they have seen far more positives than negatives come from diverse cultures  living in the same building.

“Purchasing a home/condo helps all of us to belong," McCauley-Coleman says. "I  think whenever any people are doing something together—either working or living—there is a stronger desire to understand and share their culture. I think  clashes are avoided when you better understand another person’s background or perspective and when condo owners share the responsibility of  the good of the association. It no longer allows wholly independent decisions.”

As buildings become more diverse, Guzman recommends holding community events—such as an international pot-luck dinner where everyone can bring their favorite  dishes to the community room, to name one simple, inexpensive example—and get to know each other better in a relaxed, low-pressure social setting.

“I don't necessarily think that [newcomers] have to ‘adapt' so much as I think condos need to help create stronger communities,” says McCauley-Coleman. “Compared to renting, ownership helps us to be an invested part of a community.  As a result, we gain stronger towns and cities and stronger economies. If a  community is too transient, you can see that in the types of businesses around  it, and vice versa; if a community doesn’t have any movement or new growth, you can see that in the businesses as well.”

There are some very simple yet practical measures that property managers and  condo administrators can do to help a situation of cultural diversity in the  building.

“First and foremost, the ability to listen, return phone calls and provide great  customer service is paramount,” McCauley-Coleman says. “In most cases, go back to the old school way of doing things. When someone has  something to say—especially when they're upset—let them talk; don’t try to stop them from their initial complaint.”

It’s necessary for an association to have good, reliable, productive and  knowledgeable employees as well and be open to dealing with everyone equally.

According to the recent report, “Open to All? Different Cultures, Same Communities,” produced for the Interfaith Housing Center of the Northern Suburbs by Nathalie  P. Voorhees Center for Neighborhood and Community Improvement, “There are many ways a suburban [association] can create a more inclusive,  welcoming and supportive community for its immigrant residents,” the report says. “With regard to housing, local government should reach out to immigrant  groups....and engage and involve immigrants in local government.”

Most people—even the most fair-minded and outgoing—are somewhat resistant to change, particularly where their neighborhood or  community is concerned. For Falzone, establishing and maintaining peaceful  friendliness among condo residents is a simple formula: “Adopting rules that are of common interest to everyone, holding social events to  encourage community spirit, and being fair and transparent in enforcing all  rules and regulations.” And that's a formula we all can live by.

Keith Loria is a New York-based freelance writer and a frequent contributor to  The Chicagoland Cooperator.