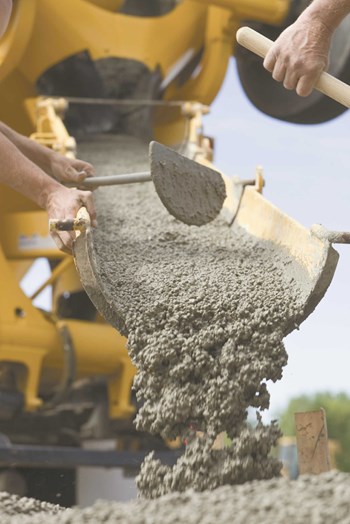 In Chicago, urban high-rises with sidewalk frontage and suburban HOAs containing walking paths, parking lots, and service roads are reliant on their paved surfaces for conducting their everyday business. Therefore, it's crucial that buildings and associations regularly inspect and maintain their concrete.

The first step to healthy, functional paved surfaces is understanding some basic terms. While the terms cement and concrete are often thrown around interchangeably, they're not the same thing; cement is actually an ingredient of concrete.

“Concrete is basically a mixture of aggregates and paste,” says Tim Zera of Zera Construction Inc. in Niles. “The aggregates are sand and gravel or crushed stone; the paste is water and Portland cement.”

A wide variety of mix proportions can be used to make good concrete, as long as proper mix design procedures are used. A good general rule to use is what industry pros call the rule of 6’s: A minimum cement content of six bags per cubic yard of concrete, a maximum water content of six gallons per bag of cement, a curing period (keeping concrete moist) a minimum of six days, and an air content of six percent (if concrete will be subject to freezing and thawing).

There is a wide variety of concrete mixes used throughout the Chicagoland area,” says Matt Serna, a paving expert with Dubois Paving in Wheeling. “The most typical mix is a 6-bag (4000 psi) air-entrained, low-chert ready mix. These are mostly used for sidewalks, stoops and residential driveways.” To increase the strength and durability of heavily used surfaces additional thickness and reinforcement can be used.

Like most other materials, concrete will slightly change in volume as it dries out. In typical concrete, this change amounts to about 500 millionths. Translated into dimensions, this is about 1/16 of an inch in 10 feet (.4 cm in 3 meters).

“The reason that contractors put joints in concrete pavements and floors is to allow the concrete to crack in a neat, straight line at the joint when the volume of the concrete changes due to shrinkage,” says Jeffrey G. Smith, restoration project manager of R&J Construction Supply Co. Inc. in New Lenox. “If you don’t protect the concrete from water, salt, carbon dioxide, bad things will happen.”

The two biggest maintenance issues that are associated with paved surfaces in both the high-density urban environments and more suburban areas of the metro are surface spalling and cracking. “Cracking is caused from an inadequate sub-grade and weak mix,” Serna says. “Spalling is a poor mix, over-finishing and de-icing application to surface.”

When it comes to the actual installation, there are a number of things a building’s staff can look out for to make sure that shortcuts aren’t being done that can compromise the longevity or strength of a paved/concrete surface. These include an inadequate sub-base, a lack of reinforcement, either no wire mesh or fibers in the mix, poor finishing techniques, inadequate joint spacing, general sloppiness from start to finish and improper curing.

“Curing is the procedure for maintaining an acceptable moisture content and temperature profile in the concrete to ensure desired properties of the concrete are achieved,” Serna says. “Testing has shown that improper or lack of curing can cut the strength of a proper concrete mix by as much as 50 percent. The potential for concrete shrinkage, cracking, and dusting increases significantly when concrete is not cured correctly.”

Concrete surfaces can also flake or spall if the water/cement ratio is not as low as possible to improve durability of the surface. Too much water in the mix will produce a weaker, less durable concrete that will contribute to early flaking and spalling of the surface.

In addition to inspections, there’s plenty an association’s staff can do to keep its concrete in good repair and maximize its life span. Serna offers the following checklist to keep it top-notch at all times.

• Keep the concrete generally clean and free of debris

• Do light pressure washing to remove dirt and stains

“You should seal concrete surfaces with commercial grade sealer,” he says. “A curing compound acts to prevent moisture from leaving the concrete during initial stages of strength development, a concrete sealer is designed to prevent moisture from entering the concrete matrix, to assist in limiting surface deterioration due to cycles of freezing and thawing. New concrete should air dry for 30 days prior to the application of a concrete sealer. Follow the manufacturer’s directions for application rates and intervals.”

Many sealer applications are effective for a two-year period, but the use of deicing chemicals during the first year of service is not recommended, especially if concrete is installed late in the year. Sand is an acceptable alternative any time the weather gets bad and snow or ice accumulates.

“Deicing chemicals used for snow and ice removal can cause and aggravate surface scaling,” Serna says. “Therefore, judicious use of these products with regard to amount and frequency of application is strongly advised. Remember, deicers can also reach concrete surfaces other than by direct application. For example, drippings from the under-carriage of vehicles. During and after the concrete’s second winter, deicing chemicals containing sodium chloride (common salt) or calcium chloride may be used judiciously.”

It’s recommended that you never use deicers containing ammonium sulfate or ammonium nitrate, as they will chemically attack and rapidly disintegrate concrete.

Over the past 20 years, the biggest boon in the concrete industry has been the introduction of air-entrainment in all exterior concrete surfaces.

Serna explains that air-entrained concrete contains billions of microscopic air pockets. These relieve internal pressure on the concrete by providing tiny chambers for the expansion of water when it freezes. The amount of entrained air is usually between 5 and 8 percent of the volume of the concrete, but may be varied as required by special conditions. The use of air-entraining agents results in concrete that is highly resistant to severe frost action and cycles of wetting and drying or freezing and thawing. It also has a high degree of workability and durability. In Chicago, which is subjected to tough cycles of freezing and thawing, air-entraining helps paved surfaces resist flaking and scaling. If air-entrained concrete is not used, there will be subsequent damage to the surface.

Chert, which is found to some degree in most aggregate deposits used to produce concrete, is porous aggregate (sand, gravel or crushed stone) with low-resistance to weathering. “Chert can cause surface defects, known as pop-outs, in exterior concrete flat-work applications. Pop-outs are indentations in a concrete slab surface created when porous aggregate picks up moisture, freezes, expands, and fractures, taking a portion of the concrete slab surface mortar with it,” Serna says. “Pop-outs can be minimized by using low-chert aggregates, which contains a specified maximum percentage limit of porous aggregates. To minimize the potential for pop-outs in exterior concrete flat-work applications, specify low-chert aggregate concrete mixes.”

In Chicago, the concrete laws are overseen by the building and code enforcement departments, engineering departments or outside consultants hired by the village, town or city.

Citations from the city or state may warrant repairs and often including a fine. Problems can also lead to large court settlements.

When it comes to protecting yourself legally with cement and paved surfaces, every community association should have general liability coverage.

“This coverage extends to the premises liability each community association faces for injuries in common areas,” says Joel Davis, an insurance agent with CAU of America Inc., based in Hoffman Estates. “The coverage is usually a coverage part to a commercial package policy. Occasionally a community association with no commonly owned property will purchase a mono-line policy that covers general liability only. The general liability policy would cover injuries to invitees, licensees and even trespassers if negligence can be established against the community association. Unit owners themselves also end up filing injury claims against their own association if the mishap occurred outside of their individual unit.”

“If an injury occurs on common elements, the injured party and their attorney will routinely file a claim against the common element master policy,” Davis says. “The assumption is that the community association maintains the common elements and should be aware of and correct any hazards, which could lead to injuries. Thus, this is where the injury claims are directed.”

Of course, in the insurance game, nothing is ever as simple as black and white.

“The rules of the association may dictate who is responsible for snow and ice removal on the sidewalk and driveways. Even if the community association is not legally responsible, if a liability claim is filed against the community association, their insurer will still incur defense costs,” Davis says. “Often times these defense costs are outside the policy limits and can be unlimited. This is why many insurers will opt to pay a slip and fall claim when negligence has not been established, just to stop paying the mounting legal fees.”