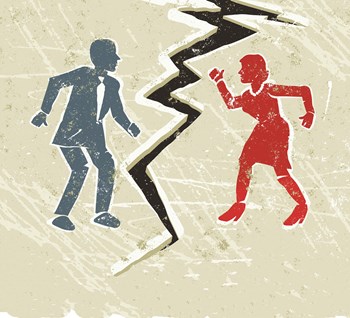 It's almost axiomatic that when numbers of people live in close quarters with each other, disagreements over noise, odors, shared spaces, and other day-to-day minutia are bound to crop up. This is true even in the most usually-harmonious communities.

In the case of co-ops, condos and HOAs, there may be hundreds, or sometimes even a couple of thousand people residing at the same property, which means the likelihood of disagreement among neighbors exponentially increases. How boards and managers perceive and handle such issues depends on the nature and severity of the complaint, of course, but one thing is certain: it's up to condo and HOA administrators to step in and do their best to mediate things when tempers flare and disagreements erupt between residents, or between residents and the board.

“It doesn’t matter if it’s a big building or a small building, from time to time there will be intra-neighbor relations complaints,” says Beth Markowitz, president of a New York City-based management firm. “It could be leaving garbage in the hallway outside their door to a neighbor walking around late at night in high heels—when you are in a communal living setting, noise complaints are not uncommon.”

While complaints can run the gamut—from smoking to recycling to concerns over hoarding—Stuart Halper, a practicing New York City attorney and co-owner of a management firm, says boards should always expect and prepare for complainers.

“Every association has individuals that are troublesome owners,” Halper says. “They are troublesome in that they are not philosophically on the same page as the board and/or they are nuisances in their respective residences.”

Recently, Halper received a phone call from a client who was the ex-president of his board. While he said this individual wasn’t “troublesome,” he was calling to complain that people were smoking outside on the patio, which had been designated smoke-free.

“The patio was just created and he was complaining about the smoke infiltrating his apartment,” says Halper. “The board’s annual meeting was that same night, so he was calling me to express his concerns.”

In many cases, managers, like Halper, are the first line of defense. Whereas board presidents could field the concern in hopes of quick mediation, a trusted and respected third party is usually the best course of first action.

“The manager should be the first line of defense when an issue comes up. Board members don’t want to really be anything other than pleasant neighbors to their neighbors,” says Markowitz. “This is not to say that board members should never get involved because there is always an exception to the rule. As with any community people have relations with each other, including board members.”

Like New York, Illinois (under the Condo Act and the Forcible Entry and Detainer Act) allows for eviction as a remedy boards can use for violations of the rules of declaration and/or failure to pay assessments, but that should be a remedy of last resort. Boards and managers should try to find ways to deal with troublesome residents and tenants in a conciliatory manner with the aim of finding a resolution. The most important thing, the experts say, is to go by the book. Cutting corners or ignoring the rules and regulations can turn a board from being on the offense to being on defense very quickly.

“Ninety percent of the people we deal with are pretty reasonable people,” says James Stevens, a principal with the law firm of Chuhak & Tecson, P.C. in Chicago. “It's often either a lack of knowledge of the rules or the terms of the declaration, or a willful blindness to those rules and terms. I often find it's pretty useful for boards to start with a violation hearing, and to use that as a chance to have a face-to-face with the owner, and to talk to them to see if there might be some kind of resolution possible.”

The severity of the disturbance should determine the severity of the response. “If anything involves a present safety concern to the property, don't wait around for an extensive back and forth discussion over months with the owner who's not in compliance,” remarks Stevens.  “The board should be quick to act if when the safety and the security of the building is concerned. If it's a less urgent concern, working the owner and going through the violation process face-to-face with the owner is really valuable.  A good property manager might even be able to take the lead. We work with a lot of good property managers who will go out and try the friendly knock on the door approach.  They'll say hi and talk about the issue before it gets to the point of our office sending a letter, which definitely sets a different tone.”

In Stevens' opinion, boards should only take action when the nuisance or violation affects the common areas of the property, and should avoid getting involved when the dispute is between two owners unless the rules specify that they should.  “Those disputes can go on forever,” remarks Stevens.  “If the dispute between owners is because of an owner's perceived or actual impairment or disability, though, that's very careful territory because associations have to make reasonable accommodations for people's existing disabilities.” In those cases, Stevens recommends talking with the owner and seeing if there's a way to minimize the noise or disruption.  If not, then the association should consider providing a reasonable accommodation, erring on the side of caution and liberal construction of what a reasonable accommodation would be.

The manager or attorney that intervenes usually does so in cases where the person is mentally ill or disturbed and poses a threat to the other unit owners and shareholders. In that case, social services or the local police authorities should be contacted so that the person can receive the help that they need.

The right and/or ability for a co-op or a condo owner to rent out a respective unit has long been debated. When Airbnb launched in 2008, the online domicile portal gained popularity in the tourist hub that is Chicago. “Renting out units on a short-term basis usually leads to noise complaints and rowdy occupants,” remarks Stevens.  “Because we're a big city, people love to come in and have a weekend out on the town.”  In addition to unruly short-term renters, there's also the issue of security in a building where units are being rented out on a short-term basis. “In the case of a unit that's put on the market as a short-term rental, you have keys or building access codes going out to upwards of 100 people over the course of a year, and that can obviously be very unsettling to boards and other owners,” remarks Stevens.

It is not a pleasant prospect, especially given the fact that short-term guests present security and nuisance concerns, especially for condominiums, and the boards of the state’s condo associations would be well-advised to review and possibly strengthen their covenants to specifically ban these types of rentals as well as ensure adequate enforcement provisions and procedures.

“Most declarations provide that leases have to be for a certain term, usually one year and not less, or six months and not less,” remarks Stevens.  “If the covenants state that short-term rentals are prohibited, the covenants will also have a clause that allows the association to recover its attorney fees or costs for most owner declarations. If not, it's covered under the Condominium Property Act.”

Stevens suggests the first step is of sending the owner a letter reminding them that short-term rentals are a violation, and requesting written confirmation that the unit is no longer listed as available for short-term rentals. The nice part of Airbnb and similar short-term rental sites, is that once it's determined that an owner is using the online service to rent out their unit, it's easy to find their profile and monitor their rental calendar for dates that the unit is listed as available. “Board members and managers can follow along at home and keep us apprised if there's not immediate compliance,” remarks Stevens.

If they are not immediately in compliance, the board can file an injunction and proceed to court. “These cases are usually fairly easily won,” remarks Stevens. “When the judges know it's an HOA attorney going into the courtroom, they are very good about understanding that the covenants provide what they provide, and that they're to be construed and enforced strictly.”

In an effort to be proactive, experts say that managers and board members who are open and communicative will often thwart many minor troublesome behaviors. This is not to say that grievances will not be fielded at meetings, but an open dialogue often bridges gaps. Experts advise boards and managers to attend seminars, read industry publications and research issues before reacting to a troubled shareholder or resident.

“Boards can disseminate rules and regulations and quality of life issues through newsletters, emails and a general openness—acting like good neighbors goes a long way in making it a healthier living situation,” says Halper. “Communication is key, but in some instances communication just isn’t going to work.”

W.B. King is a freelance writer and a frequent contributor to the Chicagoland Cooperator. Staff writer Jenn Welch contributed to this article.