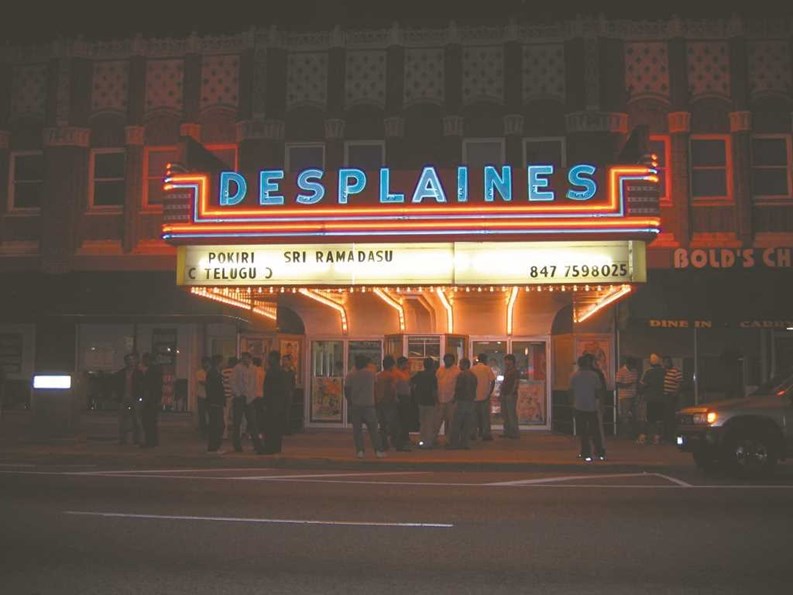 Des Plaines, Illinois in Cook County was originally settled by the French who  named the town, “of the plains.” Today, the town is officially nicknamed the "City of Destiny."

This suburb of Chicago, which sits right next to O'Hare International Airport  and the Des Plaines River, runs through the east of the city's downtown. Des  Plaines is traversed by two interstate highways, the I-90 Northwest Tollway and  I-294 Tri-State Tollway, and named for the Des Plaines River, which flows  through it.

Des Plaines sits atop the "Des Plaines Disturbance," an area that is said to  have been created by an ancient meteor. When it impacted, the bedrock was  highly fractured with large blocks of sediment upended in which the layers of  sedimentary rock are highly abnormal. This ancient crater sits 75 to 200 feet beneath the town and was eventually  filled by glacial activity. Today, no trace remains on the surface.

The Potawatomi, Ottawa, and Ojibwe (Chippewa) Native American tribes inhabited  the Des Plaines River Valley prior to Europeans' arrival. The first white  settlers came from the eastern United States in 1833, following the Treaty of  Chicago signed the same year. After the first settlers arrived, many German  immigrants moved to the area during the 1840s and 1850s. In the 1850s, land in  the area was purchased by the Illinois and Wisconsin Land Company along a  railroad line planned between Chicago and Janesville, Wisconsin. In 1852, the  developers built a steam powered mill next to the river, to cut local trees  into railroad ties.

Socrates Rand then bought the mill and converted it into a grist mill, which  attracted local farmers. The Illinois and Wisconsin Railroad made its first  stop in the area in the fall of 1854. In 1857, the Chicago, St. Paul and Fond  du lac Railroad began running its route, stopping near the mill where a small  business section developed. In 1859, the Chicago and North Western Railway  purchased the rail line, stopping its train and subsequently named its station  "Des Plaines." In 1869, the subdivision name was changed to Des Plaines and the  Village of Des Plaines was incorporated.

Des Plaines was reincorporated in 1873 and a village board was elected the  following year. Local brick manufacturer Franklin Whitcomb was the village's  first president. In 1925, village residents voted to convert to a city form of  government, and annexed the Village of Riverview to the south. A subsequent  annexation included the Orchard Place area in 1956. The city experienced rapid  growth after World War II, and even more expansion with the opening of nearby  O'Hare International Airport.

Today, the city of Des Plaines operates under a council-manager form of  government. The council acts as the city's legislative body, enacting laws and  establishing policies that govern the city. The council consists of a part-time  mayor and an alderman who represent each of the eight individual wards. A  full-time city manager oversees the day-to-day operation of the city.

Fast food fame came to Des Plaines in April 1955 when Ray Kroc opened a replica  of the McDonald's chain restaurant. Though this was the ninth McDonald's  restaurant, Kroc purchased all of the equity in the fledgling chain and led its  worldwide expansion. Today, the restaurant in Des Plaines is home to the  McDonald's USA First Store Museum.

During the past two decades industrial growth has been phenomenal; the city has  become a raw materials and finished products distributing center, as well as  the headquarters for several major corporations. The combination of superior  air transportation, good railroads and a network of expressways have fostered  the full development of Des Plaines.

As of July 2009, the population of Des Plaines was 56,810 with a population  density of 3,917 people per square mile. Residents have a median household  income of $59,041, with a per capita income of $28,088. The average condo  value, as of 2009, is $283,726. Des Plaines is becoming more ethnically diverse  with 70.7 percent of the population being white and a growing population of  Hispanic, Asian and African-American residents. Still, most residents have  European ancestries—the majority being of German descent.

In addition to being an ethnically-diverse community, Des Plaines is home to  several Fortune 500 companies as well as many industrial, commercial, retail  and service businesses, giving residents relatively low property taxes with a  wide variety of services.

City officials tout that Des Plaines has much to offer. The park district  maintains two golf courses, driving range, a water park as well as a full range  of programs and activities. The Des Plaines Community Senior Center offers an  array of services and events for local seniors.

Des Plaines is also committed to revitalize the downtown area. One such venture  is the Metropolitan Square development. The project is anchored by a  40,000-square-foot Shop & Save Marketplace grocery store, that includes an additional 56,000 square feet  of retail space, 22,000 square feet of office space and 135 condominium and  loft units.

In July 2011, Des Plaines welcomed the opening of The Rivers Casino, the newest  gaming destination in Illinois. The state-of-the-art, 44,000-square-foot casino  is easily accessible from the all of Chicagoland area. Besides slots and a full  array of table games the casino boasts an array of restaurants, lounges and  bars.

With its proximity to downtown Chicago and O'Hare International Airport; its  strong economic base; a myriad of entertainment and dining options; low tax  rate; and excellent schools and public services, Des Plaines is an ideal place,  and often overlooked city, to make your home.