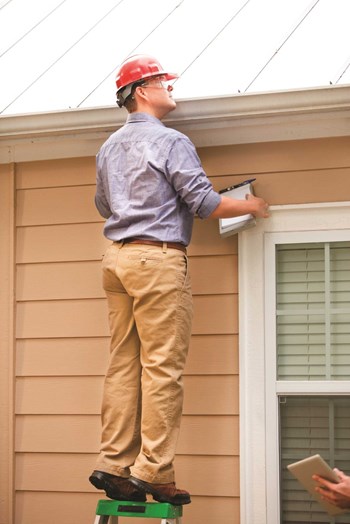 There are potential dangers all around a condo or co-op that no resident wants to consider a realistic concern: a chunk of hanging concrete above a balcony can be life-threatening; a section of delaminated masonry, wood shingles or siding, can rot, crack or create serious issues; and water intrusion problems can cause or worsen structural problems, among a wide variety of other hazards.

The purpose of such inspections is twofold: not only do they check for cracks, settling and other signs of serious damage, but also give boards and managers vital information about the condition of the property that helps them budget for upcoming maintenance needs.

The requirements of facade inspections vary, depending on the municipality to which the building belongs. The City of Chicago has some of the strictest guidelines; the surrounding towns tend to emulate them, in one form or another. “Any building over 80 feet needs to get a study every two years,” explains architect James Collins, AIA, NABIE, LEED AP, the president of Criterium-Collins Architects & Engineers in Oak Park, “Every second study, you can do from a distance, usually with binoculars.”

The less stringent exam (i.e., the ongoing exam), completed every two years, positions professional judgment in the hands of the architect who conducts the study. “The ongoing exam is a one page form and doesn't necessarily require a close inspection. The Department of Buildings leaves it to the discretion of the architect; any Chicago building with a height of 80 feet or above must submit to these inspections by a qualified architect or engineer.”

The city’s minimum requirement for an adequate inspection of a facade is an analysis of at least a 24-foot section of the facade on the sides of the building that are exposed to public sidewalks. “The city is less concerned about elevations above an alley; they're more concerned about a city sidewalk…the first priority is the public way,” says Rhocel Bon, an associate at Klein and Hoffman, a Chicago engineering firm with 60 years of experience.

While Chicago has the strictest requirements for inspections in the area, in previous years, the inspections were even more demanding, that is, until building owners and associations decided to push back.

“Building owners were spending all of this money for inspection…they wanted to spend money on repairs. So there was a public outcry saying, 'We're spending thousands and thousands of dollars for inspections that we can't earmark for actual repairs,” says Bon. “It made some sense, what they were saying.”

Generally, inspectors look for deflections, cracking and delamination in concrete framing, corrosion or deterioration of any steel or wood frame components, and water intrusion issues. They also may observe issues with windows, shutters, screen framing, accessories, piping systems in garages and roofing systems where applicable, usually with associations in suburban areas.

Outside of analyzing the public safety of pedestrians, an inspection should identify any cracks, spalling or rebar corrosion in masonry walls and balconies, in addition to roofs, floors, and windows; exterior finishes are evaluated for deficiencies or any damages that may affect the safety and stability of the building.

Not only does the inspection point out signs of ordinary wear and tear, but also identifies things that might need immediate attention and repair. Any structural problems or life safety hazards should be overhauled as soon as possible.

Qualified inspectors in Chicago are not required to do more than what the city's ordinance requires; however, they sometimes make further suggestions based on their findings. “Often times, we will recommend to a client that based on what we saw initially, we may want to do more than 24-foot coverage,” says Bon. “If we do see something obvious, we recommend two drops (or 50 feet) of coverage to take a look up close.”

Sometimes, problems found at exteriors can be structural in nature, or pose a risk to human life, as mentioned earlier. “We make sure water isn't getting behind the structure where it will freeze in the winter time, and then make the side pop off…concrete or brick,” says Collins. “Water can also go all the way inside and ruin plaster finishes. If it's a concrete building, it is going to have reinforcing inside, and the reinforcing can start to rust.”

Chicago's history gives way to a very diverse housing stock with different facade challenges, from elaborate limestone buildings of the 19th century to new steel and concrete structures. For new developments, a turnover inspection of the exterior (and other components) should be performed as soon as possible after turnover of control from the developer in order to identify any significant construction defects and protect potential personal injury claims as a result.

For instance, preceding the housing crisis, many developers hurried construction to cash in on the housing boom while irons were hot. In the process, some issues (like cracks in the concrete) might exist in the facade already, and should be checked by an architect or engineer before the building is handed over from the developer to management.

For older buildings, facade inspections do not look much different than those completed for more recent buildings; however, facades built over 70 years ago can feature more detail. “The more historical buildings are more ornate in nature, and rigging them up for scaffolding is a little bit more challenging and costly,” says Bon.

After the initial inspection, older buildings may have to deal with more strict guideline repair methods. “Older buildings have to replace the materials with the correct and same material,” says Bon. “If there's a repair with the terracotta, you have to use terracotta.”

To determine if a problem is serious, an engineer will diagnose it individually. A crack found on the exterior of the building can result in various consequences, depending on the location, configuration, width, and type. Essentially, it can be a significant problem, or just cosmetic.

Buildings with elevated recreation decks, balconies, parking garages, or other structures can be very complicated. They may have water intrusion problems without structural problems, structural problems with minimal water intrusion problems, or both. The level of detail and knowledge required makes it necessary to have a qualified inspector on hand, certified by the city of Chicago.

“Property managers don't really have the qualifications to fully assess the building envelope,” says Robert Plichta, a forensic architect and senior consultant at Engineering Systems, based in Aurora.

“Ultimately, when a problem comes up, the first thing they do is contact your handyman, or if they think it's a roof problem, they contract the roof contractor; whatever the fee, it will be money well spent,” says Plichta. “You’ll be addressing the real problem as opposed to coming up with a Band-Aid fix.”

Once an inspection is done, the engineer or inspector must codify and communicate findings to the board or property manager. “As part of the preparation reports, the city wants to know what repairs the professional is recommending, and what the time table of repairs should be,” says Bon.

“In addition to the ordinance itself, there are associated rules and regulations,” continues Bon. In the City of Chicago, the Department of Buildings will have records from the inspector of the inspections, and recommended repairs.

As soon as the community administration has the inspector’s findings in hand, engineers recommend that any structural problems are fixed expediently. While every city-sanctioned inspection has to be completed by the end of the year, some boards may want to time the inspection so that, for instance, it's not performed right after the exterior had just been painted.

The last thing you want to do is wait too long as there is liability exposure for failing to attend to the maintenance needs of your community’s buildings. There is also liability for violations and failure to have adequate disclosures. Properly managing building maintenance and inspections will avoid costly litigation and reduce the likelihood of potential fines down the road.

Keith Loria is a freelance writer and frequent contributor to The Chicagoland Cooperator. Staff writer Tom Lisi contributed to this article.