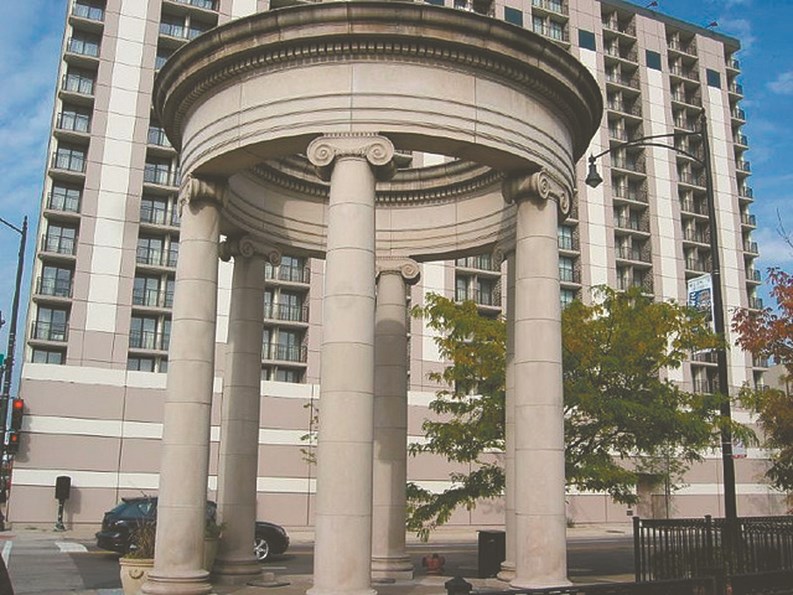 Step through a unique six-pillared Greek pavilion at the intersection of  Halstead and Monroe and you're in Greektown, located in Chicago's near-west  community, one of Chicago's most popular neighborhoods for natives and tourists  alike.

Though other ethnic neighborhoods in Chicago have become homogenized, Greektown  still retains its “Old World” charm. It's a bit of Athens in the Windy City where Greek is still spoken on  the streets and visitors will find North Halstead Street, the main street of  Greektown, lined with Greek shops, restaurants and cafes. The Aegean-vibe of  the neighborhood can be deceiving though since the inhabitants are of Greektown  are no longer predominantly Greek. During the past few decades many of the  original Greek immigrants moved to the suburbs thus evolving the community into  the diverse and urban community that exists today. Professionals, families,  Greeks and non-Greeks co-exist in this small and colorful neighborhood located  very close to the Loop. It’s actually in the West Loop neighborhood, considered the gateway to the near  west side.

In the 1840s, Greek mariners came to the bustling port of Chicago to work on  freight ships that plied the waters of Lake Michigan. At that time, Chicago was  a major port exporting goods from the west to the cities on the East Coast, and  importing goods from the east to supply the western expansion. As their numbers  grew, a thriving Greek community was born. Greek immigrants opened shops,  restaurants, cafes; they constructed elaborate Greek Orthodox Churches, such as  the beautiful St. Basil's, revered by art lovers from around the world; and  left an indelible mark on the history of Chicago.

The original Greektown neighborhood was concentrated around Harrison, Blue  Island and Halstead. In the 1960s, development created the Eisenhower Parkway  as well as the University of Illinois Chicago campus. Both of these massive  projects required land, and the land chosen was Greektown. While such  development might spell the end of a neighborhood, the Greeks wanted to  preserve their Chicago heritage, thus the community relocated a few blocks  away. Within a few years the “new” Greektown was firmly established and the “never say die” community soon became famous, mainly because of its Greek food. In 1968, Gyros,  (pronounced yeer-ohs), the famous sandwich made from lamb roasted on a vertical  spit then thinly-sliced and served on a pita usually with lettuce, onions,  crumbled feta cheese, and topped with a cucumber yogurt sauce called Tzatziki (pronounced za-ZEE-kee),  and Saganaki (pronounced sah-GHAH-nee), for flaming cheese, were introduced by  restaurants in Greektown. Students at the newly constructed university campus  would soon spread the word and now gyros are eaten across the nation.

Architecture in Greektown today is varied; low-rise condominiums, former  warehouses and office buildings converted to condominiums, and office buildings sit side-by-side with Greek restaurants decorated with  Greek columns, statues of Gods and Greek flags. Just outside the Greektown  neighborhood is the University of Chicago; the United Center home of the  Chicago Bulls and Chicago Blackhawks, as well as Wrigley Field home of the  Chicago Cubs. Greektown has become a favorite neighborhood among all age  groups. David Schwimmer, the actor who portrayed Ross on the hit TV show “Friends” recently purchased a condo in Greektown.

While best known for its cuisine and conviviality, today's Greektown is much  more than a skein of restaurants and also home to many unique boutiques and  shops like the Athenian Candle Co., Pan Hellenic Pastry Shop and Greektown  Music. Several condominium developments have been constructed, and old warehouses and  storage buildings have been converted into residential enclaves.

One of the newest developments is Emerald Chicago. The project, developed by  Senco, consists of 212 units across two towers and connected by an 8,000-square-foot-lobby. In addition to the traditional amenities such as a  fitness center, the Emerald also boasts an owner's lounge and bar, a business  center and a heated indoor parking garage. In the economic downtown, many building developers have had to offer incentives to lure prospective  buyers. Developers of The Emerald, for example, recently held a “10-20-30” sale, an incentive which lasted 10 days offering 20 units at 30 percent off the  original asking price.

Other buildings in the neighborhood include the building at 812 Van Buren  Street, built in 1910. At this building a buyer can expect to pay $195,000 for  a one bedroom, one bath condominium. Another building located at 770 West  Gladys Street, also known as 770 Lofts, there are 12 units for sale, with 24  units sold since the completion of the building. A buyer can expect to pay less  than $199,000 for a 945-square-foot five room, one bedroom fully  air-conditioned unit with a fireplace, living room, den and fully loaded  kitchen with range, microwave, and dishwasher. For less than $230,000, a buyer  could choose a slightly larger condo loft that comes with a washer/dryer and a  balcony that provides stunning views of the Chicago skyline. Maintenance fees  are $284 per month, which includes membership in the building’s exercise facility.

Besides the proximity of Greektown to the Loop, the other major selling-point of  the Greektown neighborhood is its view. The majority of the buildings in  Greektown are low-rise construction; none more than twelve stories; this allows  for spectacular views of Chicago's skyline. The majority of the condos in  Greektown offer exciting views of the Chicago skyline. Some longtime residents  complain that in becoming upscale, Greektown has lost some of its charm. In  spite of these urban problems, problems which afflict all urban communities  across the nation, Greektown remains a special community, a favorite for  residents and tourists alike. It's a community rich in history, culture and  ethnicity...an attractive combination for any neighborhood.

Patrick on Anatomy of a Condo Loan:
Thank you, very interesting article! It would have been interesting to learn total interest charges of each loan option. Did the board off…
Sharron Davis on Funding Capital Projects:
I live in a HOA community in San Jose California. We have a terrible board in place currently. We have a project regarding stairs. They wan…
Elena Williams on Welcome Committees and New Resident Orientation:
I am interested in knowing more about Las Vegas and surrounding areas
Ms. Johnson on Coping With Arrears:
My HOA,has threaten to confiscate my unit. I withheld / escrow my June assessment as soon after I learned they refused to communicate or…
Ady on Digging for Gold:
There is a looong horitsy of pranking and wedgies in pre-race festivities between the Harvicks and the man Delana calls Uncle Tony, well, be…