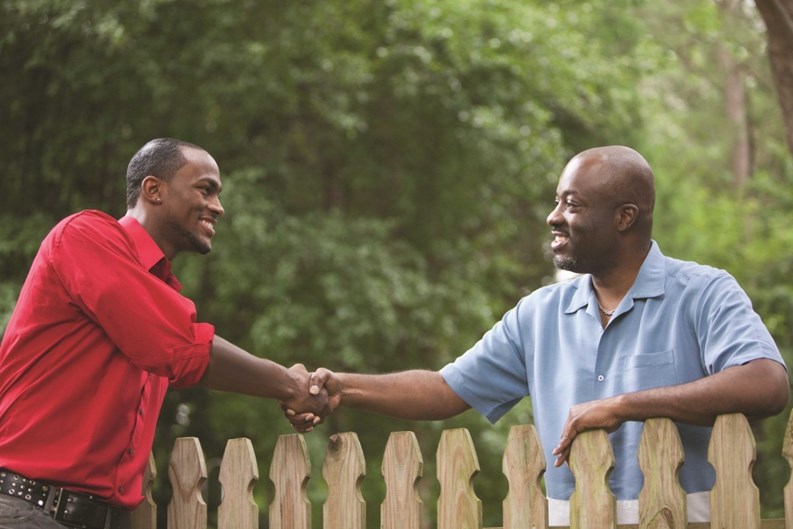 Chicago, the third largest city in the United States, is a multicultural hub that thrives on the diversity of its nearly 3 million residents and 77 distinct neighborhoods. Nestled on the southwestern shore of Lake Michigan, Chicago is traversed by both the Chicago and Calumet rivers, and attracts an estimated 40 million visitors annually. This heartland city, incorporated in 1837, has a rich history complemented by dozens of museums and cultural institutions, and numerous major sports teams, as well. What—if anything—could possibly be missing?

While many residents may enjoy the paradoxical privacy that metropolitan living provides, others may crave a sense of belonging and a feeling of community. People living on top of each other in high rise buildings doesn’t necessarily equate to the hominess of many residential communities; in fact, such close living quarters may have the opposite effect. After all, in a city like Chicago, busy lives, hectic schedules, developing careers, raising children and managing families often leaves one with little interest (or time) for socializing with neighbors.

The word “community,” like many words in the English language, has more than one interpretation. A community may be identified as a geographical location—a physical infrastructure of streets, parks and buildings, defined by tangible brick and mortar structures—but a sense of community is often emotional, intangible, and much more difficult to define; it is what makes an address a home, and not just a street location. If a sense of community truly has value—both real and perceived—what is the best way to achieve this network of support and communication? What steps should an HOA take to foster this intangible benefit? What, if any, role should a property manager play in building community awareness? What can busy residents contribute toward improving the quality of life in the place they call home?

Brent Straitiff, CMCA, AMS, is the co-owner and founder at TriView Property & Investments based in Chicago; his company specializes in properties with 20 to 200 units. He believes a sense of community is an important element in the overall value of a property of any size. He favors a proactive approach to identifying and meeting the needs of each individual property.

Straitiff believes busy schedules most often prevent residents from getting involved in community government. “Serving in a volunteer position may seem like a thankless job,” he states. “But it is an opportunity to make a positive impact.” He identifies the need for a strong management company, coupled with a level of involvement from the residents and board in order to successfully form a sense of community. He believes a positive sense of community has a noticeable impact on property value. “It creates a buzz, and a higher demand,” he continues. “Residents watch for vacancies for family and friends.”

In addition to all the usual community builders such as producing newsletters, maintaining websites, and hosting parties, Straitiff thinks outside of the box with unique methods of pulling residents together as neighbors. “When we get too task focused, we miss the big picture,” he states. He likes to make the annual meetings an event, complete with plenty of food; usually, a local restaurant caters the meeting, which serves to increase awareness and support of a local business in the immediate neighborhood. The ripple effect serves everyone, and helps grow a sense of neighborhood and community.

Between annual meetings, Straitiff has discovered another way to get the residents out to mingle over food and beverages. Since food trucks are popular in Chicago, he arranges for one or two trucks to park at a property, or between two properties, on a regular basis. An email blast goes out reminding residents of the time and place, and inviting everyone to stop by on the way home from work and pick up dinner. This setting provides a pleasant, informal way to meet neighbors and socialize while orders are placed and picked up.

Straitiff also looks at the demographics of each property his company manages. If there are several young families with children, he suggests organized play dates in the playroom, so families easily meet and form bonds with other young families they may otherwise only pass in the hallways on a busy day.

Still another idea he put into play, is a scheduled bicycle clinic. Once again he invites a local business—this time a bicycle repair shop—onto a property at the end of winter or early spring. Residents are encouraged to bring their bikes to the designated location for a tune-up, repair, or parts replacements. Since Chicago is home to 19 miles of lakefront bicycle paths, this is clearly a valuable service. Residents appreciate the convenience, and a local business is strengthened, creating another win-win situation for the extended neighborhood.

Sean Galaris, the president of LM Funding, a Florida-based financial services company, expanded his company to Chicago approximately two years ago; prior to joining LM Funding, Galaris spent 18 years as a property manager. His firm was drawn to Chicago for the diverse culture, sports, and waterfront property. Galaris focuses on helping associations recover from the recent recession, and to restore lost market values. “Establishing a positive sense of neighborhood and community is an important aspect in recovery,” he says. “It does affect the bottom line.”

Websites are valuable for sharing basic community information, but Galaris cautions many times they are only as good as the last volunteer. He recommends a one page monthly update as a good informational tool.

Galaris strongly believes homeowners don’t fully understand all that is involved in purchasing an HOA property. Sooner or later there is a negative event and an outcry of, “I didn’t sign up for this!” Depending on how these events are explained and handled by the board or the management company, a resident may become better educated and choose to become involved in building the community. “There is a skill to telling people bad news and gaining a positive shift of attitude,” he explains.

Additionally, Galaris agrees with Straitiff on the need for property management and boards to work together as members of the same team. “Treat people the right way,” he states. “If you are a good neighbor, others will also be good neighbors.” He advises properties to plan carefully for events and make sure everyone is treated equally.

One of the smaller properties managed by LM Funding doesn’t use community funds for parties; instead, with only 105 units, the residents have decided to hold an annual yard sale. “This is a high-end community, and one man’s junk is another man’s treasure,” says Galaris of this highly successful event conception. Another successful idea was organized from a community’s collective sense of empathy when a resident died. “A 5K fundraising walk was organized and a full 75% of the residents in the building participated,” says Galaris. “This was very touching and nicely done.”

Michael G. Kreibich is a principal at the condo law firm of Kovitz Shifrin Nesbit in Buffalo Grove. Often, he notes, the management and board focus too heavily on the business aspects of an association, leaving community well-being unrecognized as a value. “Unknowingly, management and the board of directors can hinder a sense of community by not focusing on informing, including, and inviting members of the association to participate in association governance events,” he says. “From a legal standpoint, the associations with the strongest sense of community have transparency related to the governance of association business and actively attempts to include its members in decisions and activities.”

Kreibich has learned that, without a sense of community, associations can become cold and impersonal. Residents tend to keep to themselves and not have a sense of community pride. Inclusiveness fosters a sense that everyone’s opinion matters; members who feel engaged tend to take pride in the common property and to look out for one another. “In the end, the eyes and ears of the residents are one of the greatest tools an association has to prevent crime and property damage,” he says.

Kreibich suggest fully utilizing modern technology to reach residents through email and—with permission—perhaps even publish an electronic directory as a helpful tool to link residents. “Formation of committees and commissions on various topics are a good way to take advantage of the expertise of the membership and to build a sense of inclusiveness”, he states.

Mary Sullivan, president of the board at 2300 North Commonwealth Condominiums in Lincoln Park, would agree with Kreibich; her building uses a web-based portal to post a community forum and calendar of events. She describes her building as a low-rise with seven floors and 72 individual units. Originally built as apartments in the 1970’s, the property converted to condos in 2006.

Sullivan has been on the board for seven years, but TriView Property & Investments took over the property about two years ago. Working alongside Straitiff, she helps make the pair an effective and efficient team. One of Straitiff’s first jobs was overseeing the new roof for the building as the condo conversion included remodeling and new windows, but insufficient roof repair.

While Sullivan would have liked a “green roof” like the one at City Hall, the budget could not accommodate that much expense. Thus, the president is working creatively with a landscape committee to beautify the rooftop deck and create a mini-oasis for meetings, BBQs, and parties; plans are in the works for resident pot luck dinners in the near future.

Sullivan would like to see more residents attend the board meetings, but has nothing but positive statements regarding the five member board; also, she says, having the right management company helps set the tone and increase confidence. Last year, when there were new board members, Sullivan and her team set up a table—with candy and smiles—and greeted the residents in the lobby. She collected email addresses and introduced herself and board members to the residents. Her proactive approach towards creating a sense of community will certainly help make her condo a great place to call home.

Anne Childers is a freelance writer and a frequent contributor to The Chicagoland Cooperator.