Do not show again [X]
By Liam Cusack   2012 October Neighborhoods 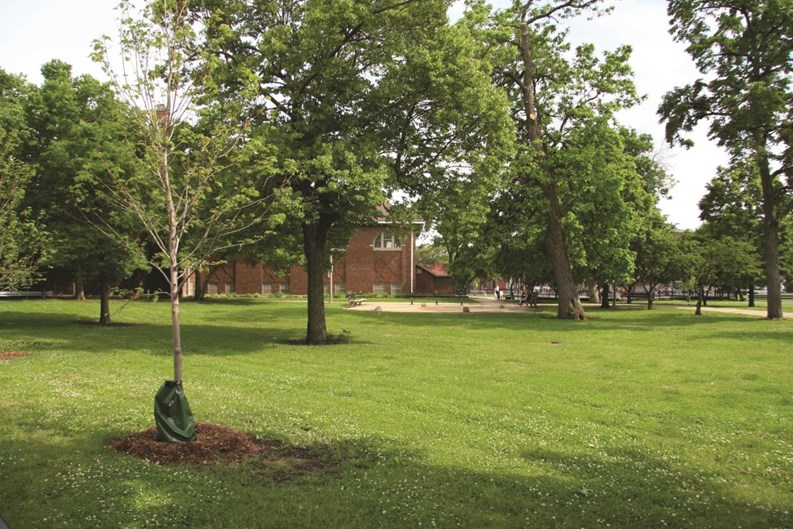 “Location...Location...Location,” is the age old adage of real estate and Jefferson Park's location,  affordability, safety and access to transportation are the primary factors that  lure people to this lovely corner of the Northwest Side. In fact, Jefferson  Park has long been one of Chicago's transportation hubs, earning the  neighborhood the nickname: “The Gateway to Chicago,” but to the locals, it is endearingly known as “Jeff Park.”

Nestled partly between two major interstates, it's simply difficult to imagine a  simpler commute, whether heading downtown or to the northern or northwestern  suburbs. If you're looking to lessen your carbon footprint, you can hop on  either the Metra or the Blue Line, which share a Jefferson Park station. In  fact, until the CTA extended its tracks to O'Hare in the mid-1980s, this was  for more than a decade the final stop on the elevated train lines. And if the  two trains don't provide enough mass-transit options, the station acts as the  terminal for almost a dozen bus routes.

Settlement in the vicinity of Jefferson Park began in the 1830s with John Kinzie  Clark and Elijah Wentworth, whose claim was near what is now the Jefferson Park  train station, where they operated a tavern and an inn. The tiny settlement of  traders, hunters, and farmers consisted of simple one and two-room log cabins  until Abram Gale, for whom Gale Street is named, built the first frame house in  Jefferson. Jefferson Park became the hub of an independent township that was  incorporated at the nearby Dickinson Tavern as Jefferson Township in 1850 until  annexed by the city of Chicago in 1889.

The area was once home to a significant population of Volga Germans, and one of  the area's one time local landmarks was a local apartment building in the  vicinity of Jefferson Park along Higgins Avenue dubbed by locals as "the  Russian Hotel."

Jefferson Park is also, appropriately enough, home to the Northwest Chicago  Historical Society which is dedicated to preserve the area's rich history as  well as most historical events and lectures

The “park” in Jefferson Park is a well-maintained seven acres operated by the Chicago Park  District. It is listed on the National Register of Historic Places and is  located on the site of what once was the Esdohr Farm. The official name of the  park is the “Thomas Jefferson Memorial Park,” the namesake of the drafter of the Declaration of Independence and third  president of the United States. The park is equipped with two baseball fields,  one combination football/soccer field, three tennis courts, one playground and  a spray pool and a full outdoor swimming pool with dressing facility. Each  summer, hundreds of residents stroll the park grounds for “Jeff Fest,” a Jefferson Park Chamber of Commerce-sponsored outdoor community festival  featuring local food, vendors and bands. The all-volunteer Citywide Orchestra  practices at Jefferson Park and performs seasonal concerts for the community.

Educational options for families are another factor making Jefferson Park a  stable long-term choice. There are many well-respected schools including  several private Catholic and Lutheran institutions in this church-heavy area.  Meanwhile, the highly-regarded Beaubien public school enrolls more than 1,000  kids, both from its own district and through a magnet gifted program. In fact,  many realtors or parents will call the school to make sure the home they're  buying is located in Beaubien's district.

The predominantly middle-class neighborhood attracts residents that come from a  variety of diverse backgrounds. Like many neighborhoods on the Northwest side  of Chicago the neighborhood has a heavy Polish-American presence, and is home  to the Copernicus Foundation, the Polish parish of St. Constance, as well as a  host of other Polish-American organizations, institutions and businesses.

Jefferson Park is also known for having a very high number of resident city and  county workers. The area is filled with the homes of Chicago Public School  teachers and staff, Chicago Police Department, Chicago Fire Department as well  as Cook County Sheriff officers and staff.

Given that Jeff Park is safe, friendly and family-oriented, it also follows that  there isn't much nightlife. It's got a few taverns, to be sure, but one of the  biggest local activities is dinner at the locally renowned Gale Street Inn, a  mainstay since 1963 and located in "down Jeff" — meaning downtown Jefferson Park, on Milwaukee just across the street from the  transit terminal. Just a couple blocks away, up through the 1970s, residents  could catch movies at the 2,000-seat Gateway cinema palace; today, it enjoys  occasional use as part of the Copernicus Center, a cultural center devoted to  Chicago's large Polish-American population.

Recently, a surprising newcomer has added a regular new entertainment option:  live performance. The Gift Theatre was initially itinerant but in 2005 the  company found a storefront home in a prime Jeff Park location. They've  regularly produced full seasons ever since, sometimes to sparse audiences,  sometimes selling out the elongated 30-seat house. The area's only arts  organization, The Gift is slowly making an impact, and despite the harsh  economy, it seems the company is here to stay.

Jefferson Park is also the home of the historic Gateway Theatre, a former movie  palace. The Gateway Theatre still serves the community today as a performing  arts center, hosting numerous cultural events such as theatrical performances,  film screenings and concerts throughout the year. The neighborhood holds two  large festivals annually: Jeff Fest in June and the Taste of Polonia over Labor  Day weekend.

The Taste of Polonia has brought some of the nation's most prominent political  figures to Jefferson Park to woo the support of Chicago's Polish community.  President George H. Bush hosted the festival in 1992 and in 2000, former Vice  President Dick Cheney as well as Tipper Gore, and Hadassah Lieberman made an  appearance. Vice President Cheney's presence was particularly notorious with  coverage in the New York Times of his lively antics which included dancing the  polka with a beauty queen, serving attendees kielbasa with stuffed cabbage and  addressing a cheering crowd by shouting the Polish phrase “Sto lat” (which means ‘May you live 100 years.’)

Thanks to its relative quiet and plenty of green space, many Jefferson Park  residents consider their humble neighborhood a slice of suburbia in the city.  Couples just starting a family buy their first house here; many find themselves  contented and happily stay put. Crime is low and the prices are right,  especially in today's market, with the average home listing at a little more  than $231,895 and the median sales price being $186,000, as of June 2012.

With all of the upsides and downsides facing Chicagoans today, it seems that  Jefferson Park has weathered the economic downturn very well and its long-range  future seems bright.

Liam P. Cusack is associate editor of The Chicagoland Cooperator.