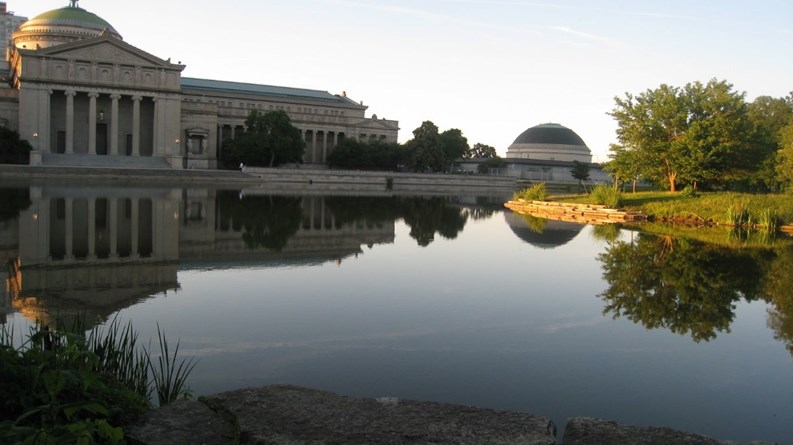 Hyde Park, located on the South Side in Cook County is approximately seven miles  south of the Chicago Loop and one of Chicago’s 77 neighborhoods and community areas.

Like in many areas though, its boundary lines vary. Some actually consider Hyde  Park to include the area between 47th and 51st Streets (East Hyde Park  Boulevard) although this area is actually the south half of the Kenwood  community area. Often, the area encompassing Hyde Park and South Kenwood is  spoken of as Hyde Park-Kenwood.

In 2000 and 2003, Money Magazine ranked Hyde Park among the best places to live  in the United States.

Among its many attractions are the University of Chicago, the Hyde Park Art  Center, the Museum of Science and Industry, the Oriental Institute and the  Renaissance Society. The name originated with a township that included numerous  other neighborhoods that have all been annexed by the city of Chicago. But the  neighborhood’s greatest claim to fame perhaps is that it was the home of President Barack  Obama for many years. The Obamas now own a home in nearby Kenwood.

Hyde Park was founded by Paul Cornell in the 1850s near the Illinois Central  Railroad yards south of the city. In 1861, the Hyde Park Township was  incorporated, extending from 39th to 63rd Streets. The southern border was  later extended as far as South 138th Street and as far west as State Street.  The township was independent of Chicago until 1889 when at that time it was  annexed to the city.

Cornell, a real estate speculator (who was also an abolitionist), purchased 300  acres of land between 51st and 55th Streets along the shore of Lake Michigan  and the Illinois Central Railroad in the 1850s,with the hope of developing the  area and attracting other Chicago businessmen and their families there. Some of  Cornell's associates, including the sheriff, used their houses in Hyde Park as  stops on the Underground Railroad.

Because the area featured the temperate climates of Lake Michigan, it was a  popular area in which to settle. Cornell parceled out the land and negotiated  for a rail depot at 53rd Street to lure guests to The Hyde Park House, a hotel  he built to serve as the neighborhood's social epicenter. The hotel served as  the popular focal point of most community activity from the 1850s until it  burned down in 1879. It was visited by popular and well-to-do guests, including  the newly-widowed Mary Todd Lincoln. In 1917, a new structure was erected on  the hotel site—it is now a condominium building called the Hampton House.

Shortly before the turn of the century, the University of Chicago was founded by  John D. Rockefeller and the American Baptist Education Society, in Hyde Park  and in 1893, the neighborhood played host to the World's Columbian Exposition  (a.k.a. the Chicago World’s Fair). While the fair covered hundreds of acres, the only structure left  standing today is Charles Atwood's Palace of Fine Arts, since converted into  Chicago's Museum of Science and Industry.

The U of C, backed by large contributions from its billionaire founder, became  one of the nation’s most prestigious academic institutions. Eighty-five Nobel prize winners hailed  from the university.

With a total of six theological seminaries located in Hyde Park, the area is  home to nearly half of the Chicago region's accredited theological schools. In  the 1930s, Hyde Park prospered as a resort area with over 100 hotels and lodges  along the lakefront. During the 1940s, some of these properties fell into  decline and were eventually converted to apartment and condominium buildings.

During the 1950s, Hyde Park faced the economic decline that affected much of the  city’s South Side—a decline that began during and after World War I with migration away from the  major cities. Large numbers of these migrants came to Chicago and settled in  Hyde Park, which then offered inexpensive but substandard housing.

During the 1950s and 1960s, educators and community leaders joined together to  sponsor one of the largest urban-renewal plans in the country. This plan  resulted in the demolition and redevelopment of entire city blocks of decayed  housing. And as a result, Hyde Park's average income soared by 70%, but its  black population fell by 40% since the substandard housing, primarily occupied  by poorer blacks and other minorities had been purchased, torn down, and  replaced. Current residents were displaced as they could no longer afford to  remain in the newly-rehabilitated areas.

A more middle class population was able to move in seeking new opportunities for  employment and home-ownership. This brought Hyde Park some much needed  stability and ensured that it remained a very racially-diverse neighborhood.

More than 20 historic structures, including homes and apartment buildings are  located in Hyde Park. Some of the noted National Register of Historic Places’ sites include the Chicago Pile-1 (site of the first sustainable nuclear  reaction) and the Frederick C. Robie House, which was built by architect Frank  Lloyd Wright. The Robie House is registered as a U.S. National Historic  Landmark as well. Located at 5757 South Woodlawn Avenue on the South Side, the  house was designed and built between 1908 and 1910 by Wright and is renowned as  the greatest example of his Prairie style, the first architectural style  considered to be uniquely American. It was designated a National Historic  Landmark on November 27, 1963 and was on the very first National Register of  Historic Places list of October 15, 1966. Chicago Pile-1 or CP-1 was the nation’s first artificial nuclear reactor. CP-1 was built on a rackets court at the  University of Chicago, under the abandoned stands of the original Amos Alonzo  Stagg Field stadium. The first artificial, self-sustaining, nuclear chain  reaction was initiated within CP-1, on December 2, 1942, under the supervision  of Italian physicist Enrico Fermi and his associates.

Hyde Park's oldest shopping district—centered around 53rd Street—features many inexpensive restaurants, frequently offering take-out, and small  businesses between Ellis to the west and Lake Park to the east. A  small-business-oriented shopping center, Harper Court, extends north of 53rd  Street along Harper Avenue that includes many small retailers and boutique  shops.

Promontory Point extends out into Lake Michigan at 55th Street. “The Point” as it is affectionately known by natives extends far enough east into the lake  to provide spectacular views of both the downtown skyline to the north and the  South Chicago and Northwest Indiana skyline to the south. It is a popular place  to watch summertime fireworks displays from Navy Pier, especially on  Independence Day. The Point is a popular place for hikers, bikers, joggers,  runners, sunbathers, picnickers, cross-country skiers, and adventurous  swimmers. Many residents of Hyde Park and fans of The Point show their pride by  putting bumper stickers on their cars, bikes, skateboards that simply read  "Save the Point." These indicate opposition to the concrete seawall proposed by  the Army Corps of Engineers for The Point and the neighboring 57th Street  Beach. Members of the "Save the Point" campaign prefer to retain the existing  limestone seawall.

The southeast corner of Hyde Park contains the northern end of Jackson Park, in  which sits the Museum of Science and Industry, an original architectural  remainder of the Columbian Exposition. Adjacent to the museum is a large park  containing a small Japanese garden. The Midway, running from Stony Island  Avenue to Cottage Grove Avenue, connects Jackson Park to Washington Park.

As you might expect of a university neighborhood, there are plenty of coffee  shops, many of them with free Wi-Fi access (try Istria Café just outside the 57th Street Metra Station and Third World at 53rd and  Kimbark). The area around 57th Street is known primarily for its independent bookstores,  including the South Side branch of Powell's, an antiquarian bookshop, O'Gara  and Wilson's and the general-readership branch of the Seminary Co-op bookstore,  known as "57th Street Books." On the first weekend in June, the venerable 57th  Street Art Fair takes up 57th Street between Kimbark and Kenwood Avenues.