Do not show again [X]
By Debra A. Estock   2015 December Neighborhoods 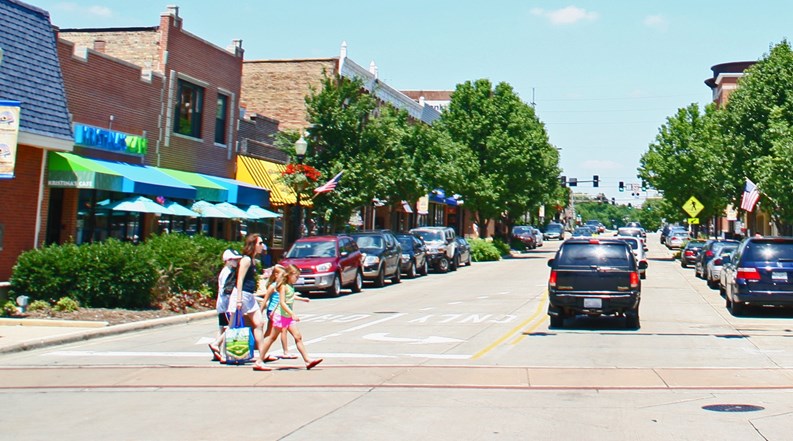 Founded by a religious evangelist, Downers Grove is a village in Southern DuPage County, Illinois, and is the birthplace of composer and guitarist Muriel Anderson, Olympic ice hockey champions Cammi and Tony Granato, and actress and former model Denise Richards.

The village, which has a population of around 48,867, is located 22 miles west of Chicago. Convenient access to Chicago via rail and several major expressways make Downers Grove a prime location to live, work and do business. The Downers Grove of today has developed from a sleepy village into a bustling Chicago suburb with many diverse businesses including Advocate Health Care, Dover Corporation, Pepperidge Farm, DeVry, Inc. and Sanford, maker of Sharpie and Paper Mate.

Downers Grove borders the communities of Oak Brook, Westmont, Darien, Lombard, Woodridge and Lisle. In the heart of the I-355 and I-88 corridors, O’Hare and Midway Airports are just 30 minutes away, and three Metra stations serve the community.

Downers Grove was founded in 1832 by Pierce Downer, who was a religious evangelist from Wampsville, New York. Early settlers in the community included the Blodgett, Curtiss, and Carpenter families. These original settlers were mostly migrants from the Northeastern United States and Northern Europe. They constructed the community’s first schoolhouse in 1844.

One of the major drivers of bringing new settlers to the area was the rise of the railroad. The Chicago, Burlington and Quincy Railroad was extended from Aurora to Chicago through Downers Grove in 1862, significantly increasing the village population. While the town was incorporated in March 1873, its somewhat unusual spelling ("Apostrophe-free since 1873") seemingly remains a minor historical mystery.

After the railroad’s arrival, two major roadways were built that also brought residents and visitors in waves to the town. The construction of two major toll roads along the village's northern and western boundaries,  now known as I-88 in 1958 and I-355 in 1989, facilitated access to the rest of Chicago metropolitan area.

From Catalog Homes to Teardowns

The housing stock in Downers Grove is a mix of various housing components, some, generally near the center of town, date from the middle of the 19th century, but housing styles of each succeeding generation are represented. Historically, Downers Grove has witnessed one of the highest teardown rates in the Chicago area; small older residences are being demolished and replaced with much larger new houses. Teardowns have been the source of much controversy within the village. Since they occupy much more land than the original houses, rainwater that was originally absorbed by their yards is directed into neighboring yards and streets, resulting in flooding. Concerns have been expressed that teardowns have also served to greatly reduce affordable housing in the town.

Downers Grove prides itself on the presence of about 25 Sears-Roebuck Catalog Homes, built using purchased kits between 1908 and 1940. During 2006 and 2007, a movement arose to establish the 1846 Blodgett House as a museum of the Underground Railroad. The house has now been moved onto the Downers Grove Museum Campus.

The racial makeup of the village stands at about 86.0% White, 2.6% Black or African American, 0.2% American Indian and Alaska Native, 5.8% Asian, 0.6% Native Hawaiian and Other Pacific Islander, 1.2% from other races, and 1.6% from two or more races. Hispanic or Latino of any race were estimated at 5.8% of the population.

The Downers Grove Park district manages 49 park sites with over 600 acres of parks available for use with 450 recreational activities taking place throughout the year. On Friday nights throughout the summer, antique and specialty cars park downtown in an informal car show. The Indian Boundary YMCA sponsors a Saturday morning farmer's market from June to October, and an ice sculpture festival is held in January. In addition, the park district operates the Downers Grove Golf Club and the Downers Grove Recreation Center, holding many events throughout the year. Lyman Woods has over 70 acres complete with hiking trails.

If you’re thinking of a nice simple place to call home, that’s close enough to the hustle and bustle of the Windy City, consider Downers Grove—it’s an upbeat place to be.