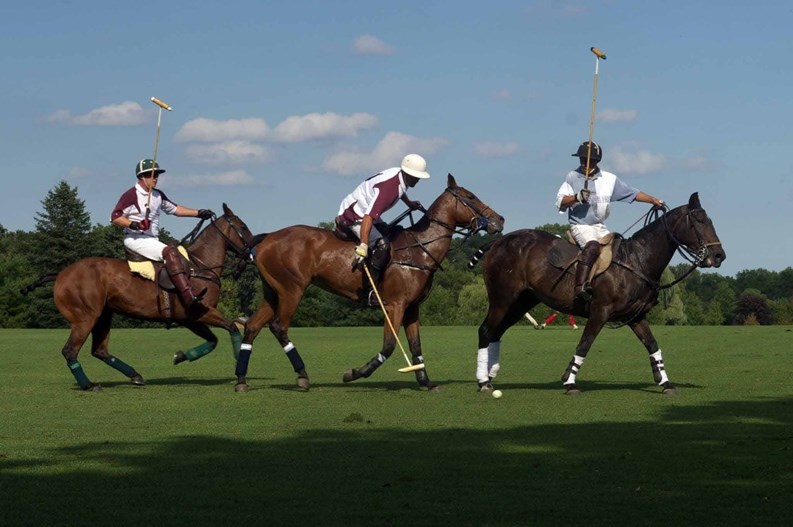 You'll have to search far and wide to find a town named for an exclusive polo club. In Chicagoland, though, you have to look no further than Oak Brook, Illinois.

Back in 1922, Paul Butler organized a polo club and the village became one of Chicago's newest suburbs. Oak Brook breaks the mold one might consider as a suburb. It doesn't have a Main Street. Nor does it have a high school or quaint downtown neighborhood. Much to the delight of resident's wallets, it does have many corporate campuses where huge corporations call home, and with all those corporations come the requisite allowance of more than of hotels, highways and quiet streets in the evenings and weekends.

Oak Brook was incorporated as a village in 1958, due in large part to the efforts of Butler, a prominent civic leader and landowner whose father had first moved to the vicinity in 1898 and opened a dairy farm shortly thereafter. Prior to incorporation, the name Oak Brook was used by local residents to distinguish their community from neighboring Hinsdale and Elmhurst, going back to the founding of the Oak Brook Civic Association almost two decades earlier.

The original boundaries were smaller than the present extent of the village, but a considerable amount of land was acquired soon after the founding of the village, including the land that is now the site of the Oakbrook Center shopping mall, which opened in 1962. When you speak to Oak Brook residents they will tell you that they foster that sense of community by utilizing the amenities the village has to offer. They see their neighbors at the Oak Brook Mall, or they'll challenge each other to a game at the village's tennis courts. During the summer families will swim together at the community pool or they'll run into each other on one of the many miles of walking trails which connect peaceful and natural open spaces.

Butler's interest in sport was reflected in the Oak Brook Sports Core, which features recreational facilities not commonly found in a village of this size. At what residents simply call The Core, they have access to a golf course, driving range and the polo field that gave the village its name. Additionally the village owns a Family Recreation Center which includes an aquatic center, fitness club, basketball courts and an indoor running track. The center also features a racquet club, tennis courts, handball courts, saunas and whirlpools.

The Oak Brook Historical Society was established in 1975 to serve as a community advocate for the historic preservation of the village and to be a resource for research and preservation of its history. Their current goal is to restore the Old Butler School, which will serve the community as the Oak Brook Heritage Center, operated by the Oak Brook Historical Society. The Heritage Center will provide multigenerational programming, exhibits of the heritage and history of Oak Brook, a research library, and small group meeting space.

Most residents commute to their workplaces which are scattered all over the Chicagoland area. But a large number of people commute to Oak Brook to work at the dozens of corporate offices. The world headquarters of McDonald's Corporation is in Oak Brook. McDonald's moved into the Oak Brook facility from an office within the Chicago Loop in 1971. Chicago’s popular hot dog eatery Portillo’s is also headquartered there and other corporations include Ace Hardware, Blistex, Federal Signal, Sanford, CenterPoint Properties, DantechIT, and Follett Higher Education Group. Global non-profit organizations such as Lions Clubs International and Institute in Basic Life Principles are also based in this Illinois village.

These corporations are music to the ears of Oak Brook's 9,000 residents. Because they share their hometown with the 90,000 people who come here daily to work, plus the thousands who arrive to shop or dine, they benefit by lower tax bills. They pay no municipal taxes, so the real estate tax bill for a house that sold for around $500,000 would be an estimated $5,600 a year.

Oak Brook happens to be one of the wealthier places in Chicagoland to live. Many real estate professionals will tell you that those who buy homes in Oak Brook are predominately professionals, white collar workers and not surprisingly, a large number of doctors. The proximity of mass transit and access to the highways, where one can go in numerous directions seems to be the major draw. Baseball player Frank Thomas lived there while a member of the Chicago White Sox and hockey players Chris Chelios and Stan Mikita are also former residents.

The quality of the schools and the educational system, the various recreational amenities and cultural activities are some of the main reasons residents cite as why they make Oak Brook home.

For those that are interested in history Oak Brook has many attractions that will satisfy. There is the beautiful 1852 Graue Mill and Museum, a national landmark and the only operating gristmill still in existence in Illinois. The mill can be found at the Mayslake Forest Preserve. Also at the preserve is a 39-room mansion built by the Peabody Family. The mansion is a time capsule bringing one back to the 19th century. Prior to the U.S. Civil War the location of the mill made it an ideal stop on the Underground Railroad.

Since the village has no Main Street or Downtown residents have to find other another place where they can have celebrations and festivals. Thankfully the village has the Oak Brook Center Mall—the site of such events as the Christkindlmarket in November, and on Labor Day weekend the center hosts the Invitational Fine Art Exhibition. The namesake polo grounds provides a place to hold picnics, gather for July 4th fireworks, hold group outings, birthdays, weddings, and the village’s annual Autumn Festival.

In popular culture Oak Brook is mentioned in the medical drama series ER, Carter's parents are said to live in Oak Brook, referencing it as a rich area. The show filmed a funeral scene in Oak Brook's Bronswood cemetery in its 267th episode, "Twenty-One Guns." In a popular ad campaign by Hanes, former Chicago Bulls’ star Michael Jordan is asked by an irreverent yet likable "everyman" to join him at a conference in Oak Brook, Illinois, explaining to Jordan that, "...it would mean a lot to the people of Oak Brook.

It may be an uncommon village, but the community spirit is what defines Oak Brook, with a lot of thanks to the corporations, which have make it an attractive place to call home.

Liam P. Cusack is the associate editor of The Chicagoland Cooperator.