Do not show again [X]
By Debra A. Estock   2014 August Neighborhoods 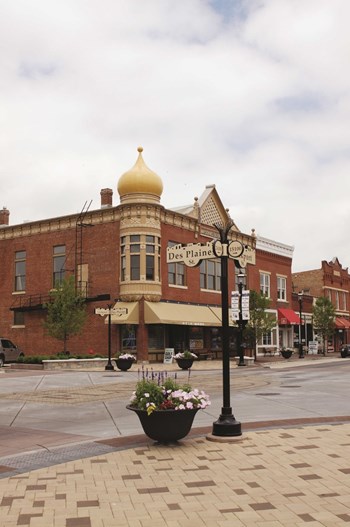 Once a tranquil prairie town, Plainfield is fast becoming a destination in its own right, offering the comforts of suburban life blended with the tranquility of country living. Recognized as Will County’s oldest community, Plainfield continues to build upon its already rich history. Village government is well-positioned to accommodate growth and encourages new commercial and industrial development to help parallel the success of its residential expansion. Its other claim to fame, besides being the home of funny woman Melissa McCarthy, is that it is where the first ice cream sundae is believed to have originated.

History tells us that Reuben and Betsey Flagg were two of the oldest settlers in the area. Their daughter was the first settler child born in the county in 1830. Just as many families are doing now, the Flaggs decided that Plainfield or Walker's Grove, as it was named until its incorporation in 1834, was more suitable for living than Chicago.

However, the problems that plague Chicago residents today, urban congestion and traffic, were not the problems plaguing the Flaggs. In 1830, swamps covered the City of Chicago, and it appeared to be a very undesirable habitat for large populations. Therefore, the Flaggs ventured onwards to Walker's Grove.

This did not stop Reuben Flagg from capitalizing on the Chicago population. Flagg is attributed with delivering the city's first pork shipment, in 1831, to a group of Methodists. The first frame home in Chicago was possibly due to Flagg hauling the walnut timbers to build it.

The first permanent white settler was James Walker, who was introduced to the area along the DuPage River by his father-in-law, Rev. Jesse Walker, a pioneer Methodist circuit rider. The two Walkers traveled through the area as early as 1826 on one of the many trips in which Rev. Walker evangelized the Potawatomie Indians.

Two years later in 1828, James Walker returned in the company of several men to stake a claim and erect a sawmill around which the settlement of Walkers' Grove developed. However, it was not until 1833 that the first government land sales occurred in what is, today, Will County. The earliest land transactions were completed in Chicago.

The arrival of the railroad helped the village grow. The EJ&E Railroad (Elgin, Joliet, & Eastern Railway) was operational in 1886 and provided freight service and grain transportation for the thriving agricultural community.

In 1904, the Aurora, Plainfield & Joliet Railway established a streetcar line with a popular, twenty-acre camping resort in Plainfield. Known as Electric Park, the attraction included camping cabins, a large auditorium, a dance pavilion, restaurant, bowling alley, swimming, and boating along the banks of the DuPage River. A baseball diamond with an enclosed grandstand and horse driving track were also included. The park closed in 1923 when the streetcars were replaced by buses. Plainfield was served by the Joliet, Plainfield & Aurora Bus Line which began in 1924.

Plainfield is also claimed to be the home of the very first ice-cream sundae. Legend has it that a Plainfield druggist created the novelty after the urgings of patrons to serve something different. Topping some ice cream with syrup, he named it the "sonntag" after his surname. Sonntag means Sunday in German, thus the ice cream sundae was born.

A stroll through Plainfield’s downtown provides insight into its gradual, steady growth. Stately historic buildings anchor the twon and new structures rise to meet them. Quaint shops, restaurants and entrepreneurial ventures set the scene for a thriving central business district, complemented by agriculture and industry balancing the mix on the outskirts of town.

The village has established a Community Preservation Commission and historic preservation ordinance. It is the home of the Lake Renwick Preserve, a county forest preserve used for birdwatching and other activities.

Another great place to spend your time is Settlers' Park. The park is a 20+ acre expanse located in historic Downtown Plainfield, just south of the Village Hall. The park features the Richard A. Rock Amphitheater, a history walk, a restored war monument, a lake, open space, a picnic shelter, playground/tot lot and walking trails. The park is the site of many festivals, concerts and outdoor films throughout the year.

A few other annual favorites include Plainfield Fest, Egg’straordinary and the Halloween Spooktacular. Plus, throughout the year, guests can enjoy concerts and movies in Settler’s Park, weekly antique-car shows, wine tastings, live music and family events at the library.

During the summertime, the village celebrates “Plainfield Fest,” which is a weekend full of fun for all ages with carnival rides, bounce houses, food, live music, bingo, bags, a pizza contest, craft and business vendors with the proceeds raised dedicated to developing a Riverfront park amenity for the Plainfield community. The Riverfront project is an ambitious plan to develop a park along the DuPage River in downtown Plainfield. The bark would encompass approximately two miles of the river between Route 59 and Renwick Road.

For art lovers, the Lockport Street Gallery is an absolute must. Located in downtown, this beautiful gallery displays and sells paintings, jewelry, sculptures and furniture from the 19th and 20th centuries. The gallery specializes in Louis Icart and Salvador Dali, but certainly doesn’t stop there. History buffs enjoy visiting the nearby historic Naper Settlement and the newly restored Elgin, Joliet & Eastern Depot right in town. The depot, in use until the early 1970s, is available for tours by appointment during weather-permitting seasons and is also open during town events.

Performing arts lovers will find anything and everything at the Rialto Square Theatre in nearby Joliet, from ballet to bridal expos, comedy to cooking classes, travel cinema to tap dance and everything in between. Listed on the National Register of Historic Places and cited as one of the 10 most beautiful theaters in the world, the Rialto is a must-see for cultural enthusiasts.

With so much going on, why not stop by Plainfield, have a sundae, do some birdwatching, take a stroll through downtown. Whatever you do, you'll have a lot of fun in this charming little village.

Debra A. Estock is managing editor of The Chicagoland Cooperator. Associate Editor Liam P. Cusack contributed to this article.