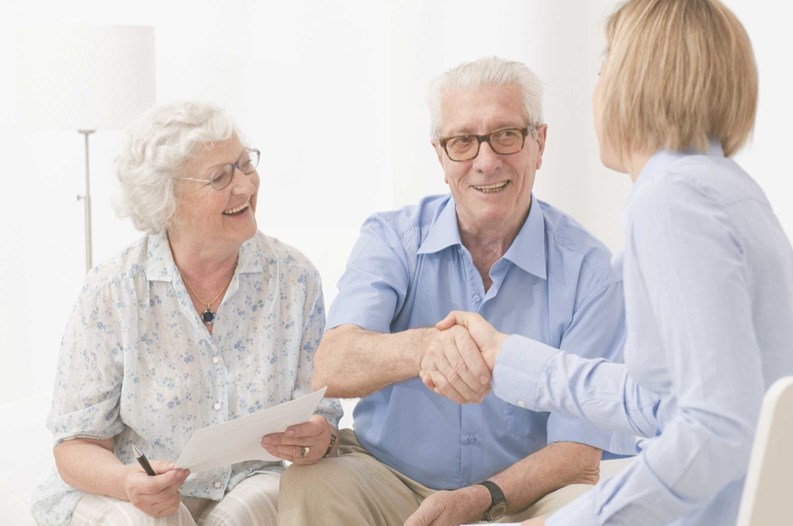 According to the most recent U.S. Census, an estimated 285,000—or roughly 10 percent—of Chicagoland's population is over the age of 65. Older Chicagoans live in all  parts of the city, both integrated into their longtime neighborhoods and in  seniors-only condo developments all along the lakefront. While not as common as  in other parts of the country, a significant portion of these residents have  reverse mortgages.

In short, a reverse mortgage is a type of loan structure available only to  senior homeowners 62 years and older. According to the federal Department of  Housing and Urban Development (HUD) which administers the great majority of the  reverse mortgages written in the U.S., it is a special type of home loan that  lets the borrower convert a portion of the equity in their home into cash.  Although the interest keeps building up, the reverse mortgage doesn’t become due or payable until the borrower either passes away or moves out of  the home permanently, meaning that he or she hasn’t lived in the home for a year or more, according to Peter Bell, president and  CEO of the National Reverse Mortgage Lenders Association (NRMLA). The repayment  amount can’t exceed the sales value of the home, and after the loan is repaid, any  remaining equity is distributed to the borrower or the borrower’s heirs or estate.

“There are liabilities taken on by lenders as part of their responsibilities as  FHA lenders,” says Bell, but “the FHA insurance is designed to help mitigate those liabilities.”

After years of popularity, however, the current financial situation has  seemingly made some lenders think twice about offering reverse mortgages.

Today, according to Lemar Wooley, a spokesman for HUD, Home Equity Conversion  Mortgage (HECM) loans make up about 95 percent of the reverse mortgage market.  These are the only reverse mortgages insured by HUD’s Federal Housing Administration (FHA). Applicants must be 62 or older; own the  property outright or have a small mortgage balance; occupy the property as  their primary residence; not be delinquent on any federal debt; and participate  in a consumer information session given by an approved HECM counselor. And  HUD-approved condos definitely are one of the types of housing that meet the  requirements.

Since October 2010, lenders, under the direction of FHA, have also been offering  a new product called the HECM Saver. Under this program, eligible borrowers are  charged lower upfront fees. However, these lower fees result in less money  being made available to the borrower than under the traditional HECM loan.

The first reverse mortgage was given in 1961, but that was an isolated case  given by a local savings and loan in Portland, Maine, to the widow of the  lender’s high school football coach. The concept became more popular in the 1980s, and  in 1987 under the influence of the AARP, Congress created the Home Equity  Conversion Mortgage, or reverse mortgage, program. In 1989, HUD selected 50  lenders to make the first FHA-insured reverse mortgages

Applying for a reverse mortgage is a simple process. As in any business  transaction, you call up the company, make a date with a representative, pay an  application fee, then an appraisal fee.

A counseling session, as we’ve mentioned, is also mandatory under HUD rules. HUD, and the lenders  themselves, have lists of approved counseling organizations. Some will even do  the counseling over the phone.

Advice on how to prepare to talk to lenders and counselors, according to Bell,  can be found on the National Reverse Mortgage Lenders Association website at  www.reversemortgage.org. Prospective borrowers can also find a NRMLA member  lender on the site.

“All reverse mortgage lenders who are originating the FHA-insured HECM use the  same calculator to determine your benefits,” says Michael Branson, CEO of All Reverse Mortgage Co., a California-based  lender that operates in about 13 states.

“As long as each lender is using the same property value and the same birth  dates, then the only things that can affect the amount of money you would  receive would be the interest rates (and then only if one or both lenders are  far enough over the floor of 5%) or the fees,” he adds.

In case you’re wondering what a reverse mortgage calculator is, it asks your zip code, your  birth date, your spouse’s (or other co-owner’s) birth date and how much your home is work, as well as, in some cases,  optional questions such as mortgages and liens on your home, and the cost of  any necessary home repairs. All this together will help calculate the amount of  the loan you will receive.

Reverse mortgage calculators can be found on the NRMLA site, individual lenders’ sites, on the AARP’s website and on a link from the HUD website.

Of course, not everything always goes smoothly. What happens when a borrower  moves or passes away? What does it mean that “the repayment can’t exceed the value of the home?” And what if the market bottoms out and the estate can’t get enough money for the property?

These topics, according to HUD spokesman Brian Sullivan, are covered during the aforementioned HECM counseling sessions. Lenders recover their  principal, plus interest, when the home is sold, usually by the borrower or  heirs, and the remaining value of the home goes to the borrower or heirs.

“If the sales proceeds are insufficient to pay the amount owned,” he says, “FHA will pay the lender the amount of the shortfall. FHA collects and insurance  premium form all borrowers to provide this coverage.”

Even though the FHA makes up the shortfall, however, losses are still a matter  of concern. “When the lenders made these loans four, five, six years ago,” says attorney Neil Garfinkel of the New York law firm of Abrams Garfinkel  Margolis Bergson, LLP, “they assumed appreciation would occur. Now, the marketplace has changed. I know  of a number of reverse loans that do not have the value needed to pay off the  outstanding balance.”

What about accidents or disasters—for example, what happens if the housing unit or building the mortgage was taken  out for has a fire, or becomes uninhabitable because of mold or other  conditions? The answer, as with all mortgages, is that borrowers are required  to have adequate homeowners’ insurance on the property.

Prospective borrowers, according to Sullivan of HUD, don’t have to own their own homes outright before they can be considered for a  reverse mortgages. However, eligible homeowners with existing mortgages must  pay them off at the origination of the HECM loan. “This means,” he says, “that the HECM principal limit loan amount must be sufficient to pay off an  existing mortgages.”

“Usually,” says Peter Strauss of Epstein Becker & Green, another New York attorney, who specializes in elder law, “seniors, at least in this generation, have a relatively small first mortgage. If  they can borrow up to $30,000, $40,000 with a HUD mortgage, they can still come  out ahead.”

What would cause a senior to be turned down for a reverse mortgage? “A senior who doesn’t have enough equity in the property is the most likely person not to be able to  quality,” says Garfinkel.

What They’re Used For

Once a reverse mortgage has been approved, the borrower has a choice of how to  receive payments. According to Bell, the disbursements can come in the  following methods: lump sum, line of credit, life tenure payments, or any  combination of the three.

“Every borrower has individual needs,” he says. “Those looking to eliminate their monthly mortgage payment by refinancing with a  reverse mortgage will likely choose a lump-sum loan, which is offered at a  fixed rate. Homeowners who want to draw money down over time may find the  line-of-credit feature advantageous.

“A special aspect of the line of credit is that the available balance is adjusted  upwards annually. For homeowners looking to have a constant stream of cash  coming to them as long as they live in the home, the life tenure option  delivers constant monthly payments.”

Although the most common form of seniors’ residential development nationwide are condo associations, there are some New  York-style cooperative apartments in some parts of the country, and they exist  in Chicagoland, as well.

Today, says Garfinkel, whose firm has been “very involved in closing reverse mortgages for close to 20 years,” there are currently no officially approved co-op reverse mortgage products. HUD  has drafted documents that would allow HECMs for co-ops (Garfinkel assisted in  drafting these documents), but after several delays, there has still been no  FHA approval.

If HECM reverse mortgages are approved by FHA and offered with the agency’s backing, since the resident owns shares and not real estate as such, the value  would have to be calculated. Strauss says this would be done by getting an  appraisal.

Are Reverse Mortgages For You?

Like everything else, reverse mortgages are not for everyone. Strauss says that  as an elder law attorney, he became interested in reverse mortgages in the  context of how to help seniors pay for long-term medical care, since Medicare  pays for this only on a limited basis and doesn’t pay at all for “custodial care,” meaning support services for daily living.

Some seniors could have trouble understanding the terms and conditions of  reverse mortgages. And a 2006 survey by AARP showed that more than two-thirds  of the borrowers polled by the organization felt the fees were high.

Thankfully, there are many places where senior condo owners can turn for advice  on reverse mortgages: AARP, HUD, the lenders themselves, the National Reverse  Mortgage Lenders Association, and, in many cases, their condo’s manager or board president.

Raanan Geberer is a freelance writer and a frequent contributor to The  Chicagoland Cooperator.