Do not show again [X]
By Liam Cusack   2012 June Neighborhoods 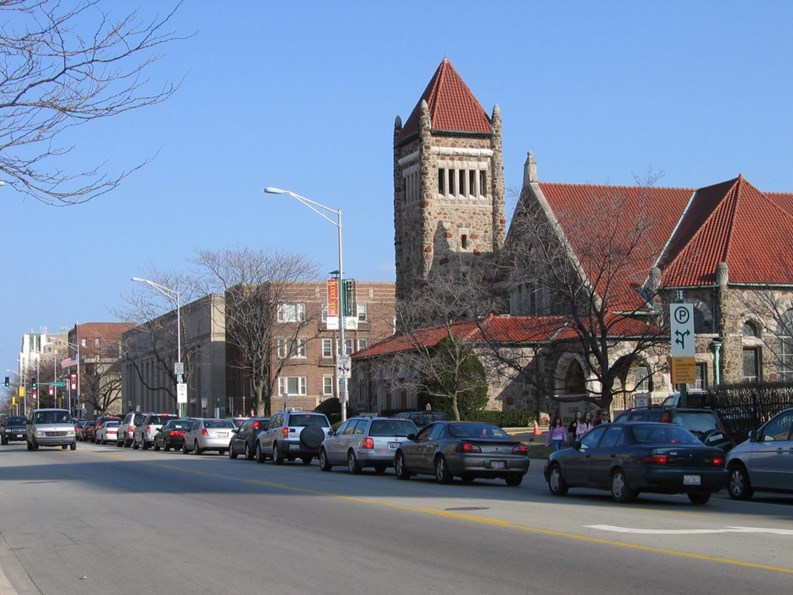 You don't have to walk far to find architectural gems in Oak Park. With its  patchwork of stucco, frame and brick homes punctuated by Victorian and Prairie  Style structures, the community is an architecture geek's dream. "Oak Park is  an outdoor museum of architectural history," says Adam Ross, spokesman for the  Frank Lloyd Wright Preservation Trust. "Wright's local designs continue to  attract visitors to Chicagoland from around the world."

But living in this cozy community 10 miles west of the Loop is more than just  walking tours of historic districts. The population—and spirit—of this compact suburb is as unique and diverse as its housing stock. Indeed,  such notables as Wright, Ernest Hemingway, Bob Newhart, Percy Julian and Edgar  Rice Burroughs once called Oak Park home.

A Bit of History

In 1837, Joseph Kettlestrings purchased 172 acres of land just west of Chicago.  By 1850, the Galena and Chicago Union Railroad was constructed as far as Elgin  and passed through what would later become Oak Park. In the 1850s the land on  which Oak Park sits was part of the new Chicago suburb of Cicero. Oak Park grew  dramatically after the Great Fire of 1871. Originally part of Cicero, it  seceded from the township and incorporated as a separate municipality in 1902.  Its population grew steadily and topped 40,000 by 1920.

In the decades following World War II, Oak Park's demographics started to shift.  By the 1960s, a firm commitment to reform and social welfare had germinated in  the area. “Oak Parkers” witnessed rapid racial re-segregation in Austin, their eastern neighbor. To  counter this, Oak Park embarked on an aggressive policy of integration, and in  1968 approved one of the nation's first local Fair Housing Ordinances outlawing  discrimination. The village board created a commission charged with preventing  discrimination and encouraged African American families to settle throughout  the village. Among many measures implemented, the use of "for-sale" signs by  real estate agents was banned and remains so today.

Oak Park's enviable location as one of the closest suburbs to downtown Chicago,  the availability of multiple modes of high-speed transportation, and its  location between the Loyola Medical Center to the west and the University of  Illinois at Chicago and multiple medical centers to the east attract  university, legal, and health-care professionals to its gracefully aging  housing stock.

According to a study issued in 2000 by the Surface Transportation Policy Project  and the Center for Neighborhood Technology, Oak Park residents have the lowest  estimated transportation costs of any suburb in the Chicago region, due to its  location, design and access to transportation. Its residents are served by two  CTA elevated rail lines (Blue and Green), Metra's Union Pacific west line  train, 10 PACE bus lines, and eight CTA bus lines. A free shuttle transports  residents and tourists throughout the village, and Interstate Highway 290 runs  through town.

Oak Park also has a history of bicycle-friendly initiatives. Its leafy streets  are popular biking routes for families and other residents on weekends. More  active bicyclists can access the Grand Illinois Trail along Augusta Boulevard  on the village's north side, and the trail-head of the Illinois Prairie Path is  less than a mile from town. In August, the village produced an ambitious  10-year bicycle plan with the goals of increasing bicycle use and creating a  safe and inviting environment for biking.

Oak Park attracts architecture buffs and others to view the many Frank Lloyd  Wright-designed buildings found in the village - the largest collection of his  residential properties in the world. Other attractions include Ernest  Hemingway's birthplace and boyhood home, the Ernest Hemingway Museum, and the  three Oak Park homes of Tarzan creator Edgar Rice Burroughs.

While downtown Oak Park is the largest of the town's commercial districts, the  village actually has 12 separate business districts. Shopping choices range  from chain retailers to funky independently-run shops to resale outlets and  thrift stores. The neighborhood's arts community is rich and diverse as well.  It is home to Village Players Theatre, Open Door Repertory Co. and Oak Park  Festival Theatre. The Arts District on Harrison Street offers several  galleries, boutiques and restaurants.

With a median home price of just under $400,000, Oak Park's property values have  come down during thanks to the Recession, though many realtors in the area  don't feel that the suburb has experienced the same kind of decline as other  areas.

Oak Park's diversity, history, sense of community and school system was a big  draw for Michelle Schielke, an attorney and single mom, who chose to live in  Oak Park after much research. “I chose Oak Park because of its 'Main Street' feel, but with a bit of an edge;  and I don't regret that decision. We love it here.”

Liam P. Cusack is the associate editor of the Chicagoland Cooperator.