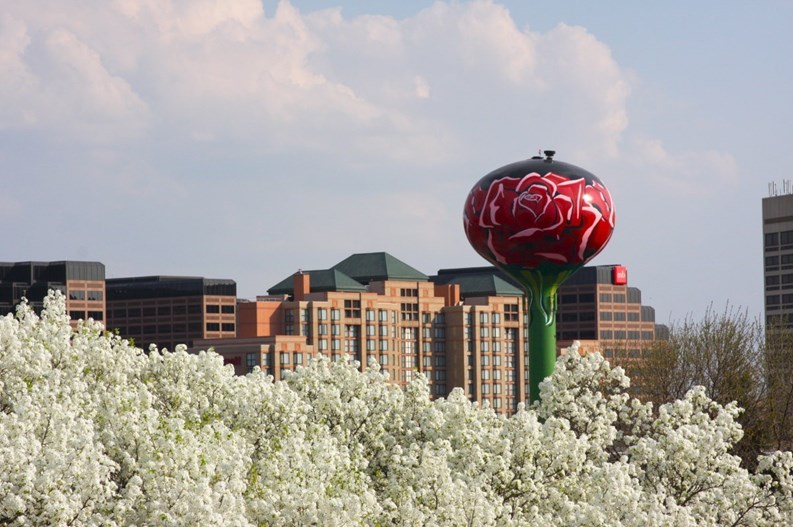 Indeed, Rosemont—a small village in Cook County—is well known by locals and visitors for its overflow of social treasures and attractions, the least of which is a 20 minute driving proximity to downtown and a five-minute drive to Chicago’s O’Hare International Airport.

Located immediately west of the boundaries of the City of Chicago, the village (as per the 2010 U.S. Census) has a population of only 4,300 residents; though, annually, it allures an average of 75,000 visitors—per day!—to its venues and attractions. Naturally, this unusual—albeit ingenious—geographical concept creates an intriguing scenario for Rosemont’s residents, businesses, and visitors alike.

Due to its proximity to several major highways, O'Hare and the Windy City, Rosemont has emerged as a significant entertainment district, offering ample corporate and office space, over 50 restaurants, more than 15 hotels, and—of course—the Donald E. Stephens Convention Center, a complex with nearly one million square feet, home to over 200 tradeshows and conventions annually, which are attended by 1.35 million visitors; consistently, the center is ranked among the top convention centers in the United States.

The Donald E. Stephens Convention Center is—of course—home to The Chicagoland Cooperator’s very own annual Chicagoland Spring Expo, taking place Saturday, May 16 from 10:00 am to 4:30 pm. The show features educational seminars, thousands of exhibitors, and an opportunity for property managers and board members to mingle with relevant vendors and service providers in the region. Additional information about the show is available online at spring.ilexpo.com.

Additionally, Rosemont is home to the 16,000-seat Allstate Arena (home to the Chicago Wolves, Chicago Sky, DePaul Blue Demons, and other concerts and other live entertainment), the 4,400-seat Rosemont Theatre, the 130-store Fashion Outlets of Chicago shopping complex, the Ballpark at Rosemont (an outdoor baseball stadium and 140,000-square-foot indoor sports dome), and MB Financial Park, an entertainment center that features restaurants, entertainment, summer concerts, and winter ice skating. And Donald E. Stephens, the former mayor’s attraction to Hummel figurines, did not go unnoticed. The village has the largest collection of Hummels in the world on display in a museum at the convention center. Stephens, a successful business entrepreneur, spent 14 consecutive terms in office and passed away in 2007 at the age of 79.

Other notable attractions include the Rivers Casino—based in the nearby city of Des Plaines—along with additional hotels, offices, restaurants, and corporate facilities in the adjacent O'Hare neighborhood and nearby suburban communities Des Plaines and Schiller Park. Most major hotel chains (at least of those that operate in the United States) have a major presence in Rosemont, including Hyatt, Hilton, Marriott, Starwood, Wyndham, and InterContinental, among many smaller chains and independent facilities, all of which handle tremendous numbers of guests throughout the year.

The village was incorporated in 1956 but had been settled long before that. While Rosemont's land area and population are relatively small (compared to suburbs in the Chicagoland area), it is a major center for commercial activity, and a key component of the Golden Corridor. Renowned as a study in community ingenuity, Rosemont’s heritage and beginnings were much more humble…yet undoubtedly prophetic.

Except for the laying of the Wisconsin Central Railroad’s tracks in 1887, not much changed until 1933, when the Century of Progress Exposition came to Chicago and had a profound effect on the area several ways.

Part of the land area (that later became Rosemont) was divided into 25-foot lots and sold at the world’s fair; and tons of soil required for the building of the fair were taken from the banks of the Des Plaines River and were replaced with tons of garbage. Despite frequent flooding and growing tire and garbage dumps, the unincorporated area was home to 84 neighbors, who were persuaded by civic leader, William Burkes, to form a homeowners association in 1952.

When the group of homeowners met in 1956 to vote on the incorporation of the town, Don Stephens, a young husband and father, was the easy choice for mayor. Members of the community placed suggested names of the new municipality in a hat. The name pulled was Rosemont…and a remarkable town was born.

As a result of a 1995 decision by residents, most residential sections of Rosemont have become gated communities, a concept that provides locals with privacy from the nearby tourist attractions by restricting access to those with access inside the gates. Residents of Rosemont—like those of gated communities nationwide—do so to help prevent crime and traffic, control the makeup of the community, and exude exclusivity.

While certain parts of the city do appear upscale and exclusive, Rosemont has not yet positioned itself as one of Chicago’s overly affluent communities. According to a City-Data.com 2012 analysis, its residents hold an approximate median household income of merely $34,000 (the State of Illinois has a median household income of $55,000); the same source cites Rosemont’s medium housing value at around $266,000, somewhat higher than the averages found in the who of Illinois.

So if you are “someone that wants it all,” there’s no better place to get the best of everything than the vibrant community of Rosemont, Illinois.

Blake French is associate editor at The Chicagoland Cooperator. Managing editor Debra A. Estock contributed to this article.