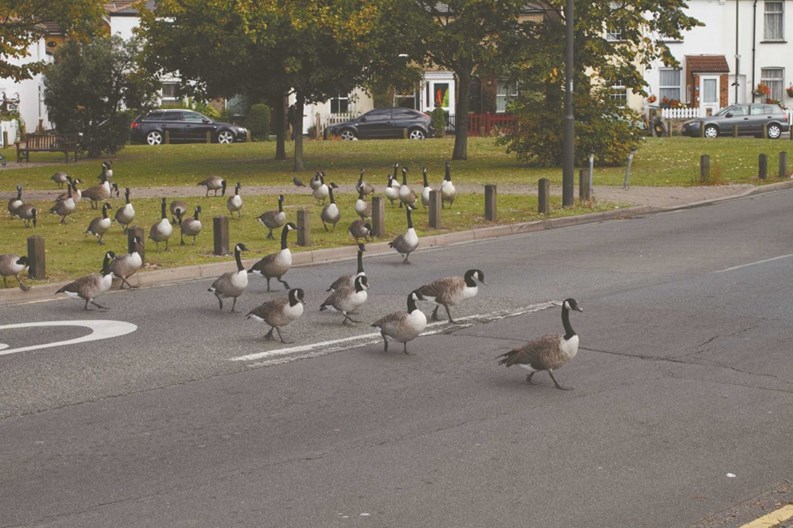 It’s end of a sunny day in June, and the sun is setting over the Windy City. A  gentle breeze is coming off Lake Michigan, and a gorgeous evening beckons. You  pour a glass of wine and throw open the door to your condo's balcony to take in  the magnificent view of Lakeshore Drive and the sparkling water beyond. Leaning  on the railing, you're about to take a sip—and out of nowhere swoops an angry seagull, buffeting the air with its wings and  squawking with menace. There is suddenly no lingering over the view as more  gulls appear, clearly unhappy with you, and determined to defend what they  apparently consider their territory. Your lovely evening on the balcony has  taken a nightmarish turn, and you have no choice but to retreat indoors or risk  being pecked to death.

Think that scenario sounds too Hitchcockian to be true? Think again. Here in  Chicago and the surrounding suburbs, it's not just seagulls that make property  owners and managers crazy—according to Chrissy Hansen, marketing manager for Chicago-based avian control  company Bird-X, "Pigeons are probably the number-one pest bird everywhere in the U.S. but we  also have starlings, as well as geese and gulls." Regardless of whether your  property is an urban high-rise or a sprawling suburban HOA, you're not immune  to the hassle of pest birds.

When birds aren't on the wing, they're feeding and/or roosting – and most birds are experts when it comes to identifying cozy-looking places to  congregate, feed, and build nests. As it happens, many of those cozy-looking  spots are man-made.

If you're at a loss as to why your condo is overrun with flocks of birds like  pigeons or grackles, take a look upward. According to bird control experts, the  problem often begins with architecture. "If your building has large, commercial  HVAC equipment raised on legs above the roof surface, it creates virtual bird  condos," says one bird pro.

“Geese bother people a lot in condos," says Rebecca Fyffe, a wildlife educator  with ABC Wildlife and the Wildlife Control Policy Institute in Chicago and of  Chicago Wildlife Management and Consulting. "If a goose could make us do what  it wanted us to do in terms of landscaping for its pleasure, it would look like  exactly what we do at condo developments. The grass would be cut short, there  would be a pond, and there would be no tall plants around the pond. We’re landscaping to attract geese."

And while having a flock of seagulls or geese colonize your building might not  seem as gross as having an insect or rodent infestation, birds come with their  own set of human health hazards. Birds congregating in densely-populated areas  can pose a real health risk, Fyffe continues.

“Pigeons are what we call ‘dirty nesters,' " she says. "They spackle their nests with their own droppings,  so when they flap their wings and climb around on [the nest] it forms a dust.  All birds carry salmonella in their droppings, and it is particularly common  among pigeons, so that's really big concern. Histoplasmosis is a fungal lung  disease that occurs in bird roosts. If birds have lived in an attic or  something, and someone has to go up there to do work once those spores have had  a chance to really grow and propagate, they can become infected [from breathing  the airborne particles], even if they only breathe in a few spores.”

Also, adds Hansen, "Pest bird droppings are very acidic. When they’re on buildings or structures and when they combine with water, a chemical  reaction takes place and it can actually eat through paint and all kinds of  surfaces and cause structural damage.” In fact, there have even been bridge collapses blamed on the corrosive  properties of pigeon poo.

And according to Thaddeus Mazuchowski, president of NeverNest Pest Control in  Chicago, birds can cause problems even in death. "If birds get stuck in an  attic or roof space and die, then you’re dealing with a smell and fly issue. These issues can lower the value of the  property.”

Most wild migratory birds—including seagulls - are protected under federal law, so getting rid of a  problematic colony of feathery pests isn't simply a matter of sending your  building handyperson up to the roof with a broom and orders to knock down every  nest he or she finds. Sometimes it may be a whole season until anything  definitive can be done. "You can't disturb the nest of a protected bird," says  Fyffe. "You can never take their eggs or young away."

On the other hand, other species that gather in large numbers and often create a  mess are not protected. With these species, "If there’s a nest full of eggs they’re sitting on, you can just scrape it right off and throw it in the garbage and  hope they’ll go build a nest somewhere else," says Fyffe.

According to the pros, allowable numbers for bird populations are set by the federal government, and  vary by species. A permit is generally necessary in order to mobilize an  elimination program to get rid of any significant numbers of birds, no matter  how pesky—and the fines for either failing to secure proper documentation and permissions,  or for illegally killing protected species can be huge— into the tens of thousands of dollars, depending on the violation.

When it comes to permitting, every state is different—so it's vital to contact the Illinois Fish and Game Department to find out  what's allowed, what's not, and what your community's options are for humane  handling of problem birds.

Avian pros agree that the key to successful bird control is prevention_and that  begins with physically blocking birds' access to attractive perches and nesting  areas. This can be done a lot of different ways, ranging from the very  inexpensive to the very pricey. Some methods involve physical alteration of the  existing architecture; some use chemical or electronic deterrents; still others  are as simple as renting an enthusiastic canine to harass birds into taking  their business elsewhere.

Physical barriers are the first line of defense against roosting, says Fyffe. By  installing slippery metal 'bird slides' that create an angle that birds can't  stand on, or roosting spikes that poke birds when they try to alight on a  ledge, property owners and managers are effectively telling birds to move it  along. Another effective method—at least as far as Canada geese are concerned—is to stretch a wire or other thin filament around the edge of a pond or other  water feature that's popular with the birds. Most waterfowl need a 'running  start' to get airborne, as well as a lengthy runway for landing, and a wire in  the way will likely send them packing.

More techologically sophisticated methods are available as well. Mazuchowski  mentions motion-activated water sprayers that hose down birds as they attempt  to land, as well as electrical strips that are installed wherever birds are  perching. A very mild electrical charge pulses through the strip every few  seconds, irritating birds and strongly encouraging them to seek shelter  elsewhere. These systems may use batteries or solar chargers, so while they can  be expensive to intall, they can be relatively cheap to operate over the longer  term.

Sound is another weapon in the anti-bird arsenal. “We have products that are electronic—sonic and ultra sonic repellers" says Hansen. "Sonic are recordings of pest bird  warning signals—of birds in distress mode. They give out a warning cry to other birds. Some of  them have predator calls as well. Those are very effective at scaring birds  away. Ultra sonic are high frequency soundwaves that humans can’t hear, but that are really annoying to birds. That’s better in smaller areas like patios because ultrasonic sound doesn’t travel as far. That’s a very effective and discrete way to deter pest birds.”

Smart landscaping decisions can also help prevent avian invasions. "If we used  native prairie plants that were tall grasses that attracted things like rabbits  which then attracted foxes and things that made the geese feel less settled in  those areas, they’d be more likely to go to someone else’s landscaping," says Fyffe. "You can landscape in ways to keep geese away. Once  you have a geese infestation, the best way to handle it is by having someone  come out with a team of dogs and haze them. The dogs don’t touch them, they just frighten them. The geese decide it’s unsafe there and they move. Having wildlife control personnel come out a  couple times a week with dogs for a number of weeks is the best way to solve a  goose problem.”

One word of caution, however: you can't just festoon your roof or other  structures with mesh or wire and call it a day, according to Fyffe. "Illinois  state law requires a pest control license to structurally exclude birds by  putting up spiking and netting," she says. "A structural pest control license  is issued by the Illinois Department of Public Health (IDPH)."

Using humane means to deter birds is a big concerns for folks who love animals —even pesky birds – but who aren't okay with having their property taken over by Mother Nature's  squawking hordes. While some communities have taken drastic steps to curb  overpopulation by waterfowl (such as rounding up Canada geese and gassing them  with carbon monoxide, as was done in New York and in New Jersey in 2010,  despite much public outcry), most bird control pros and civilians alike would  prefer to get rid of birds by non-lethal means.

“We don’t kill them," says Mazuchowski, "we just chase them out, close up the areas  where they’re getting into and let them go find some other spot. There are pest control  companies that like to use poison corn but there are like 250 species of birds  that visit Chicago, and I’m against poison due to the fact that you could kill non-targeted birds. Nobody  wants to poison the cardinals, blue jays and other birds that feed off corn.”

Other chemical solutions specifically target Canada geese and other waterfowl.  Marketed under names like Goose Chase or Migrate Goose Repellent, these are made from an extract of grapes, and are sprayed on lawns where geese  congregate. The grape extract irritates the birds, and with repeated  applications, most eventually get the hint and leave for greener grasses.

“All of our products are humane and eco-friendly," says Hansen. "There are so  many ways that are natural that you can use to keep animals away from an area  without doing anything harmful.”

Sometimes a bird problem requires a combination of physical, chemical and  behavioral measures to really be considered solved. Which method works best for  your community is a question that should be worked out with the help of an  experienced avian pest expert.