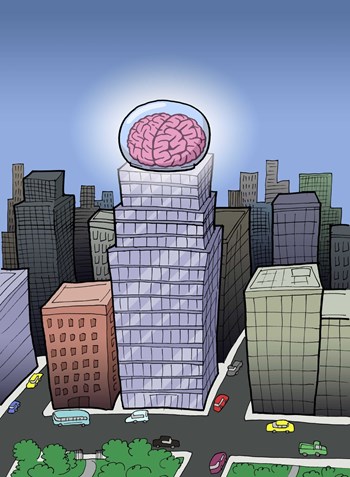 If phones can be “smart,” why not buildings? With the ever-expanding array of consumer technology  available today, it should come as no surprise that residential buildings are  incorporating more and more cutting-edge technology into their communications,  security, and operating systems than ever before, and unifying building  operating systems so they can be monitored and run from a central location by a  building staff member, or by residents themselves with smartphones and iPads.  Many of these innovative systems are being installed from square one in new  construction, but also in the form of upgrades and retrofits in older  buildings. Let’s take a look at the state of the industry.

Generally speaking, commercial buildings are more likely to be ahead of the  curve with respect to systems integration, while residential buildings tend to  be behind the curve. This is changing, however, as more and more boards are  finding wisdom in investing in the new technology. At first blush, it would  seem that the needs of both kinds of buildings are the same, but residential  buildings have different needs.

“A lot of Chicago area residential buildings are looking into something called  Triple Play,” says Carlini. “They would provide a service where you get one systems integrator to provide you  with high-speed internet, voice communications and your television server, your  cable TV. So you get one bill for all those services. It’s way beyond what you’d get from a typical phone company connection. You wouldn’t need that service in an office building. What’s happening is that the three most important things in real estate have become  location, location, connectivity, because more people are running businesses  out of their homes.”

Integration and interaction are what drive intelligent buildings. But what does that mean, and how does it work?

“Building automation systems and building energy management systems”—BAS and BEMS, respectively—“are designed to provide centralized oversight and remote control over heating,  ventilation and air conditioning (HVAC) systems, lighting and other building  systems,” King explains. “In simple terms, a BAS is a programmed, computerized network of electronic  devices that are employed for control and monitoring of systems. It primarily  aims at optimizing the performance, start-up and maintenance of systems and  greatly reduces the interaction of mechanical subsystems in a building. BEMS  basically performs the same functions as a BAS but varies more in capability  and functionality.”

These systems carry out a host of functions, King says, including optimization  of stop-and-start systems, maintenance scheduling, alarm generation, and  constant monitoring of the whole integrated system.

“BAS and BEMS vary in capability and functionality, but typically consist of  sensors, controllers, actuators and software,” he says. “Depending on whether a human-in-loop factor is involved, decisions are taken  manually or by utilizing embedded intelligence such as decision-making  algorithms.”

Technology, as the futurist Ray Kurzweil points out in his books, is progressing  exponentially. Intelligent buildings are no exception. What began with modest  advances is now capable of astonishing feats.

“Traditionally, building systems had been characterized by highly proprietary  offerings with limited ability to inter-operate,” King says. “As an example, in the 1950s, control over a commercial building's lighting  systems and heating and air conditioning would have been separate functions,  probably maintained by separate personnel. With the advent of computer systems  being integrated into buildings in the late 1980s and early 1990s, such  building systems could be centrally controlled”—that is, integrated.

Once that was achieved, the technology flourished. “With the advent of open networking and the Internet, now systems can be  controlled remotely, and building operations across a whole building portfolio  can be centralized in one regional control center,” King says.

Of course, just because something is possible doesn’t mean everyone is doing it; contrary to popular belief, not everyone tweets or  is on Facebook. “Buildings that are not smart or intelligent buildings are going to be the ones  to lose tenants,” says Carlini. “If you have a tenant who is looking for that as an amenity and the building  doesn’t have some of this stuff, they are going to go to the next building and you  know what? The next building is going to offer it. If a building does not have  broadband connectivity going to it—residential or commercial—it’s going to be passed over by a lot of tenants. Especially young and upwardly  mobile professionals. You are going to attract a better grade of tenants if you  have these amenities.”

Of particular interest to residential buildings, with their multiple entries  (front door, laundry, common rooms, roof, etc.), is what experts call “key security.” The challenge of keeping emergency copies of owners’ apartment keys in a totally secure environment (so as to prevent employee theft  or other unauthorized access) while at the same time providing quick emergency  access 24/7. Twenty-five years ago, there was no system at all for this, and now there are  two: Keytrack and KeyLink. These are highly sophisticated lockbox  biometrically-operated systems, uniquely used by residential high-rise  buildings, auto-dealerships, and the U.S. military in Iraq.

“Everybody wants to live in a secure building, young women and seniors,” adds Carlini. “IPTV cameras—Internet Protocol television is very popular now in smart buildings. Once you  put that into a building, it can switch to a channel on your TV and you can see  who is at the door. This is a huge issue for security.”

As Sinopoli points out, “the idea of integration automation is driven by the owner”—that is, the board and the residents. If there is no push to update the systems—or, in new construction, implement them correctly—the technology is useless.

The systems do cost money, but they are not prohibitively expensive. “We put in WiFi in one of our party rooms that’s a lot higher speed than you can get on an individual basis,” says Carlini. “The price of that is $100 a month. So that’s $1,200 a year split up by the amount of residents you have in the building so  the price is minimal. It doesn’t have to be a huge amount of money to do technology upgrades.”

“If current trends continue, by 2025, buildings worldwide will be the largest  consumers of global energy, using as much power as the transportation and  industrial sectors combined,” says King. “Recent studies have found that improving energy efficiency in buildings is the  least costly way to reduce a large quantity of carbon emissions. By changing  energy management practices and instituting technologies that enhance energy  efficiency, building owners and managers can reduce energy consumption by up to  35 percent.”

Is a 35 percent reduction in energy costs worth the $4,000-a-year bill? Perhaps.  This is the wave of the future. More and more buildings will be upgrading and using more advanced technologies.

“In an era of volatile energy prices and increasing concern over climate change,  the need for the innovative application of technology has become highly acute,” says King. “Buildings with integrated intelligent building technologies can save thousands  of dollars in energy by delivering heating, cooling and lighting more  efficiently. Intelligent buildings are increasingly using solar walls to  capture energy from the sun, ventilation systems to recapture and reuse heat,  insulation strategies that enable better climate control, high-efficiency  lighting systems that enhance illumination with less electricity and automatic  systems that control building services based on activity.”

Greg Olear is a freelance writer and a frequent contributor to The Chicagoland  Cooperator. Staff Writer Christy Smith-Sloman contributed to this article.