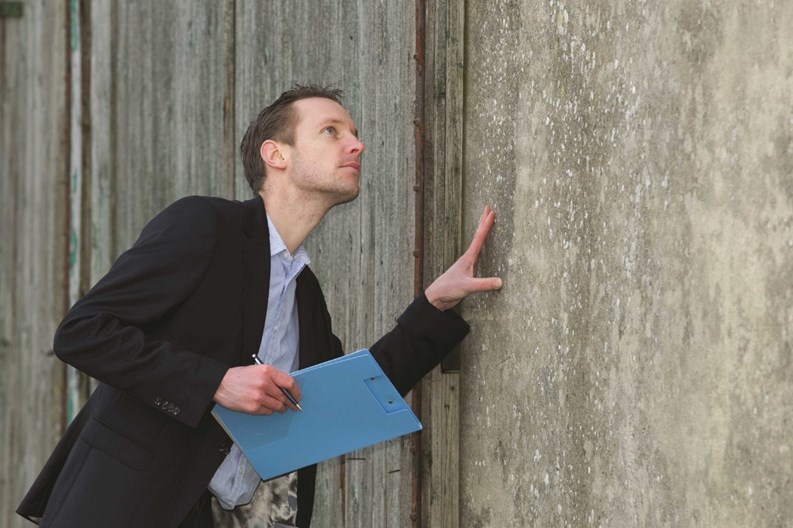 Remember the old jingle, ‘it takes a licking and keeps on ticking’? It was the famous tagline from the Timex watch advertisements. The gist of the ad is that no matter what you threw at it, a Timex watch kept working.

If you think about it, a building’s exterior is almost like a Timex watch. Each year, Mother Nature throws its best curveballs—intense sun, high winds, fierce rains, heavy loads of snow and ice, and frigid temperatures—at the outside of the building. Don’t forget the pollution, dirt from such animals as pigeons and, of course, any items that accidentally hit the exterior. The exterior continues to stand and takes it all in. Well, almost. A building’s exterior can take a lot of abuse, but after time, it does begin to show wear and tear and needs some TLC.

“It's Chicago's freeze-thaw cycles that are really tough on brick, mortar, concrete and stone that are the materials we work with,” says Robert Reese, president of AAA-1 Masonry & Tuckpointing in Chicago. “When nighttime temperatures dip below freezing all these materials freeze up, and the residual moisture in the materials freeze and expand. In daytime, we thaw with the sun. Milder winters might even be harder on masonry because you're always a few degrees above or a few degrees below.”

The Root of All Evil

Due to this harsh climate, structural issues with the building can run the gamut, and common enemies for any building are sun exposure, snow weight on roofs, and harsh winds. But, ironically the kryptonite of all modern shelter happens to be the source of life on Earth.

“The first place you'll start to see water coming is usually above the windows, in the reveal or return, you'll start to see brown spots. Or if you see wood flooring and it’s cupping or warping. We also look to see if flashing has been installed, and see if water does enter the wall, it has a chance to exit,” says Mike Galasinski, a mason at Arrow Masonry Exteriors in Palatine.

When it comes to building exteriors, water basically ruins everything down to the steel rods that provide the skeletal support of newer buildings. “On the inside of the wall, there are steel reinforcements that hold everything in place. If you have deteriorated mortar joints in between bricks and the water can get inside in the wall, it can then find steel,” says Claudius Zurek, chief of operations at Alpha Construction & Restoration Group in Chicago. “Water deteriorates the steel, which can cause bricks to fall off the building. The steel inside can compromise the facade.”

The age of a building is an important factor to consider when inspecting the health of a façade or exterior. “When you have a lot of white powder on bricks, it means water got into the facade, and the moisture is coming back out through the bricks, and it causing the brick to go bad essentially. There’s no cure for it. The proper way to fix the problem is to cut every bad brick out and replace it with a new brick. It doesn’t happen in new construction in a matter of 10 years. We’re talking about buildings that are 80 or 100 years old,” says Zurek.

But, unit owners and residents in brand-new condominium buildings can often feel a false sense of security that since their building is new, it will take a generation for any kind of major structural issue to appear. Unfortunately, with the massive construction growth in the 1990s and early 2000s, many developers cut corners in order to turn over construction projects as quickly as possible. Concurrently, city inspectors couldn’t keep up with the construction, and the level of oversight fell at the same time.

“In older homes, especially, it can take a while to see the effects. In newer homes, if it was built pretty quickly with no oversight, the water infiltration system can show up rather quickly,” says Reese. “Drywall is basically mold food. Water infiltration tends to show up pretty rapidly on drywall in the form of popping or peeling paint, or mold. Not all mold is killer mold, but it's a symptom of water infiltration. Older buildings are plaster and don't really mold up.”

Once problems arise it’s important that associations have the extra cash around to fix them before they get worse. The Federal Housing Administration (FHA) requires that condominiums set aside at least 10% of their operating income towards a capital reserve account. For example, if the annual budget is $200,000, then the association must set aside $20,000 for its capital reserve fund.

Just as an individual needs an emergency fund in case of a job loss or an unexpected car repair, an association needs a financial reserve to take care of such major repairs as roof leaks or other exterior issues. Interestingly, a Community Associations Institute (CAI) study in 2012 found that cash-strapped associations are trying everything to make do. To compensate for a cash shortfall, the CAI study shows 38 percent have postponed planned capital improvement projects, 35 percent have reduced landscaping services, 31 percent have reduced contributions to their reserve accounts, 23 percent have borrowed from the association’s reserve account, 16 percent have levied special assessments, 12 percent are allowing residents to perform minor tasks in the community and 6 percent have borrowed from banks and other lenders.

It is recommended that reserve studies are updated every three to five years. Routine inspections could be done even more frequently. “If they know that their building is built in the last 15 years, I would have a contractor look at it every three years,” says Galasinski. With older buildings, it may be a good idea to have an inspection annually. Issues like water infiltration can snowball from a minor repair job to a mega-costly structural overhaul.

Professionals also caution associations that building envelope studies shouldn’t be performed in-house as there are numerous safety factors to consider and OSHA guidelines to follow.

In the Chicagoland area, timing is a crucial factor when it comes to both inspections and repairs. Since winter causes the biggest headaches to a building’s exterior, conditions could change significantly from before and after the coldest months. Repair projects depend very heavily on weather conditions as well. “Every winter we always get at least one temperature spike, and you see all the trucks and masons out doing work. But the nighttime temperatures drop again below freezing. All that work is defective. If you're going to grind out mortar, that mortar needs to cure above freezing day and night, for a minimum of three days. If you're going to do brick work, setting new bricks and fresh mortar, that mortar requires a minimum of two weeks to cure,” says Reese. When those materials are exposed to freezing temperatures, moisture will never make its way out. Instead, it will freeze and expand, causing cracks and spalling that can ruin concrete and mortar work altogether.

Unlike a lot of other types of contracted work, there are clear parameters as to what's expected in an inspection. “It all depends on the complexity on the project. When you’re talking about new construction, after the concrete is poured, an inspector has to come out and make sure the concrete is poured correctly and the thickness is right and everything. It’s the same with electricity and plumbing,” says Zurek. “When you’re replacing materials with older buildings you have to follow city code. It can take minutes, or it can take hours, depending on the size and issues of the building.”

Cost is always an important consideration, and obviously varies a lot on the type of materials in the building, the size and type of building, as well as age. Inspections can range from $1,000 and up, depending on how many units, the size of balconies, the overall size of the building community and how easy it is to access common areas. Some associations request only a few units are inspected along with all of the exteriors. This is better than no inspection at all, but will not be as accurate as having more units inspected. Other companies might set up an alternate plan with the understanding that inspections will lead to repairs work. “Our inspections are free of charge as long as we are doing the work for the owner. The cost of that inspection is 100% credited back if any of the work selected is performed. You can do inspections any time of year, but you really must honor the temperature restrictions of the materials,” says Reese.

In a tough economic climate, it is becoming more common for associations to hold off on repairs until absolutely necessary to save money. But that can lead to even bigger and exponentially more expensive problems down the line for old and new buildings alike.

Staying on top of exterior maintenance prevents a problem from going from bad to worse. In addition, a well-kept exterior sets the stage for beautiful curb appeal which actually increases the value of the association’s property.

Lisa Iannucci is a freelance writer and a frequent contributor to The Chicagoland Cooperator. Editorial Assistant Tom Lisi contributed to this article.