Do not show again [X]
By Hannah Fons   2012 November Maintenance 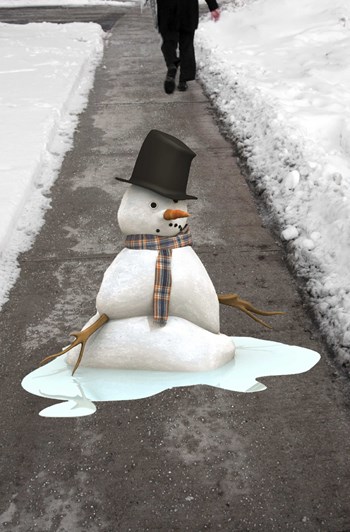 As any good condo administrator knows—either through common sense or painful experience - failing to clean up snow or  ice promptly can result in injuries, acrimony, and expensive lawsuits. Any one  of those is reason enough to get serious about snow and ice control around your  HOA, but in the current economic climate, the threat of massive legal bills is  very real, and very scary. Litigation has become far more prevalent than it  used be, and insurance companies don't have the same protection that they used  to have under state law. As a result, many are passing expensees and legal  costs on to current clients.

So what’s a conscientious board to do when the snow flies and the sidewalk outside the  building or complex is covered in a sheet of ice? Bone up, primarily. It’s your job—and knowing both what the law has to say about your responsibilities as a board  as well as what products and technologies are out there to help you with you  task are important pieces of the puzzle for multifamily communities.

It's a commonly misheld notion that even if HOAs and unit owners make every  attempt to keep sidewalks and walkways clear of snow and ice, they can still be  held liable if they inadvertantly miss and someone slips and falls.

Actually, this isn't the case. Back in 2008, the Circuit Court of Cook County  ruled on appeal in the case of Divis v. Woods Edge Homeowners Association. In  short, that case revolved around plaintiff George Divis, who according to court  records alleged that in January of 2006 he exited his condo "and slipped and  fell on a patch of ice, suffering numerous injuries....The complaint also  alleged that snow had fallen on the property in the days prior to plaintiff's  fall and that as a result of the 'incomplete and improper' snow removal,  several large patches of ice accumulated on the walkway, causing him to fall."

According to the official court ruling, the Illinois' Snow and Ice Removal Act  "...provides defendants with an affirmative defense against plaintiff's claims  of negligent or improper snow removal. Section 1 of the Act provides that "it  is undesirable for any person" to be liable for damages due to his or her snow  removal efforts, unless those acts amount to "clear wrongdoing. Section 2 of  the Act provides that "any agent of or other person engaged by any such party"  who removes or attempts to remove snow or ice from sidewalks shall not be  liable for injuries caused by his or her removal efforts, unless those acts or  omissions were willful or wanton. 745 ILCS 75/2 (West 2006)

The court's feeling was that Divis's claim that his fall was the result of  "incomplete and improper" snow removal was at odds with the actual letter of  the law spelling out his HOA's responsibility and liability for ice and snow.  "This is the type of conduct for which the legislature has sought to provide  immunity from liability when it enacted the Act," said the court. "Except in  cases of clear wrongdoing or willful or wanton conduct, the legislature has  determined that, as a matter of public policy" encouraging people to clear  their sidewalks of snow and ice is beneficial to any community, and that no one  should have to be concerned about being sued as a result of his or her snow  removal efforts.

Which should be comforting information for any board or manager facing another  tough Chicago winter—but it doesn't help with the tough task of deciding exactly what kind of snow  and ice removal products are best for a given community.

Salt of the Earth

Choosing the cold weather weapon of choice can be complicated.While most  properties remain loyal users of basic salt blends for melting ice at entrances  and in parking areas, ice-melt products have come a long way in recent years;  there are well over 100 such products available now, many of which are  variations on the salt theme, customized for different surfaces and weather  conditions.

According to manufacturers, not all ice melts are alike. By mixing the chemical  blend, makers can offer products to vary melting temperatures. Consult the  manufacturers’ websites or your product dealer to learn which of them works best in your  circumstances. Also, be aware that simply claiming that an ice-melt product is  'green' doesn't necessarily make it so. There aren’t many trade regulations on these products, so the Federal Trade Commission has  created updated Green Guides to help both manufacturers and users. According to  the FTC, when comparing ice-melt products, look for substantiated claims, such  as third-party guarantees, rather than possibly deceptive product labeling. You  can find more information at the EPA’s Designs for the Environment website: www.epa.gov/ dfe/pubs/projects /formulat/formpart.htm#44.

Winter weather in this part of the country can be unpredictable, which can make  budgeting for snow and ice tough. The prospect of paying for professionals to  deal with mountains of snow that might not actually fall may tempt boards and  property managers to simply have the HOA super or handyman handle it if it  happens—but associations are wise to remember the cost of lawsuits. Paying for plowing  and sidewalk treatment can burden the budget in a tough winter, but expensive  or not, it’s not optional—so good planning is vital. At many locations, the plowing contractor also serves  as the company providing snow-melt service.

Some HOA boards opt for protection in advance, while others take their chances. “Some associations will sign an all-inclusive agreement with a vendor,” says one property manager. “I’ve got a number that have a contractor they like working with, and they’ll be given the option for what I call a la carte service: you pay as you go.”

In other situations, they may have taken the more risky option of paying a  pre-set amount, and ice removal becomes a single-priced expenditure for the  year. “A lot of property managers like doing that because it helps with budgeting,” the manager continues. “If the annual contract is $15,000, they may pay $3,000 per month over five  months—no matter whether it snows or doesn’t, that’s what you pay.”

According to several long-range forecasts, Chicago may be bracing for  above-average snowfall during the 2012-13 winter season.

Savvy managers take steps to protect surfaces against any type of snow/ice or  water damage: replaceable mats against tracked-in materials, extra sealing of  floors before winter. But there is another option—one that is better accomplished during the construction phase: radiant heat.  Because of its cost, this type of system may also be done when sidewalks are  being replaced or otherwise changed.

One advantage of using built-in radiant heat systems for snow and ice control is  that they can keep concrete driveways and exterior surfaces stay safer. These  systems also eliminate the time and labor of using a contractor or in-house  maintenance staff to plow and shovel paved surfaces and other access areas. No  corrosive de-icers or chemical applications are required, thus preserving the  life of the underlying pavement. And the snow melting system can be designed to  shut off when the snow is cleared and the precipitation ends.

"It's beneficial mostly because of the safety aspect—especially on the stairs, which is a critical area for snowmelt and a hard area  to keep clear of ice," says Gary Fries, a technical writer at Wirsbo in Apple  Valley, Minn., which manufactures snow- and ice-melting systems. "Then there's  the convenience. When there is salt and chemicals on the surface, people are  going to drag that into the building and wear on their rugs and floor  coverings."

Uponor is an international corporation operating radiant systems for heating and  cooling in many countries, some of which have an abundance of ice and snow,  like Norway, Finland and Sweden. Circulating a water or water/glycol solution  through cross-linked polyethelene (PEX) tubing beneath concrete, turf, asphalt  or similar surfaces, the radiant system warms ground surfaces to a temperature  that will melt snow and ice on contact.

One major benefit is its usefulness on areas that are hard to plow, such as  steeply graded roadways and pavers or other easy-to-damage surfaces. Equipped  with sensors, the system is automated, tuned to respond to need.

“A lot of what we’ve done is on the tail end of what European technology started,” says Jeff Wiedemann, product manager, radiant controls for Uponor North  America, based in Apple Valley, Minnesota, a suburb of the Twin Cities. “Radiant heating is prevalent there—specifically in Sweden—and they build for snow melting,” he says. “Their applications are quite a bit smaller, so we expanded on it and [Uponor]  systems kept getting bigger. We saw the opportunity not only for space heating  but for snow removal.”

Now, even some NFL fields and other sports complexes are treated by this method,  he says.

Another great benefit of these systems is their rapid response in areas where  handicap access, emergency traffic, and such things as helicopter landing pads  are considered.

These systems, while more costly to install after a property has been completed,  are becoming more of a must in luxury markets, where they can be connected to  modulating-condensing (mod-con) boilers or even waste-heat sources for added  efficiency. “They help lower maintenance costs, and reduce the liability associated with  slippery walkways,” Wiedemann says. And those costs can be considerable. He points out the cost of  a slip-and-fall lawsuit, for one thing, and for another the recent example of  Long Island, N.Y.‘s transit platforms—so corroded by chemical wear that they had to be replaced.

“Once it’s in,” Wiedemann says, “it has a long life—well over a hundred years.” He calls the sturdy tubing “polyethelene with an attitude.”

Just as solar heat is becoming a solution to electricity costs, pre-installed  tubing can be married to a green hydrological system for winter ice removal.  Excess heat can be used for snow removal, he says. During the summer, solar  panels heat pool water; in the winter, they provide heat for a snow melt  system. “In Holland, Michigan, an area of six city blocks is melted by processed water  from the city’s water plant.” Ironically, the Environmental Protection Agency told the city its processed  water was clean but too hot to dump. “So they ran that water through a heat exchanger to get free hot water,” he said.

As a matter of safety, removing snow and ice quickly from areas that decline  toward roads with a lot of traffic is critical, Wiedemann says. “We had a car wash in St. Paul where cars slid out into oncoming traffic, so we  did that area.” Most of the time, the water evaporates and what doesn’t is tracked in the way normal rain runoff is handled. Engineering has to  consider that problem just as it does for rain.

Regardless of what choices managers make, they must in fact make one. The law is  on the side of proactive, responsive associations who start planning their ice  and snow-removal efforts before the first flake falls.