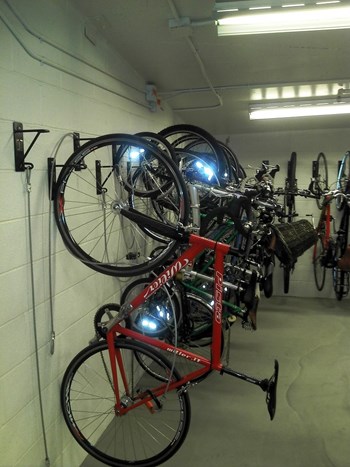 With the price of gasoline rising, daily traffic snarls, a desire to live a  healthier life and the responsibility to lessen the effect of one's carbon  footprint, there are many reasons to own a bike. Buying the bike is just the beginning. Bicycles today are not cheap—some can cost more than the price of a used car, which brings to mind the  security of our valuable two-wheelers. In a residential development other  issues arise such as the wear-and-tear on the building. Even if a small  percentage of residents in a complex have a bicycle...those bikes’ comings-and-goings will bear their mark on the floors, the interior of the  elevators and the hallway walls.

On the surface, owning a bicycle may not seem like a complex subject, but when  issues are examined the long term effects of residential bicycle ownership is  reviewed, it can turn into a major headache, and a big bone of contention for  managers.

Consider, for instance, recent comments to a bicyclist’s blog query about storage; responses range from the practical to the whimsical:

“Hang the front tire over the patio rail.”

“One hundred percent ‘no’ to bike storage areas. You can just kiss your bike goodbye if you store it  there.”

“A big selling point for our apartment was the tile floors and cinder block  walls. The walls are kinda ugly, but no bike is going to hurt them, and the  dirt wipes off easy.”

“Fill the tires with helium and let them float to the roof.”

Bicycling is big in Chicago, especially when the cold winter winds subside and  the city's denizens want to escape their winter hibernation. Chicagoans are  fortunate to live in one of the best biking cities in the US. In fact in 2012,  Bicycling Magazine ranked Chicago as the fifth best bicycling cities in the  nation. According to the magazine, when former White House Chief of Staff Rahm  Emanuel was inaugurated as mayor in 2011, he brought with him Washington D.C.'s  former transportation director, Gabe Klein, and an ambitious agenda to  reinvigorate Chicago's bike network. Entitled the “Streets for Cycling 2020,” this plan calls for the installation of 100 miles of separated bike lanes  during the next four years, a commitment that local bike advocates refer to as “staggering.”

The plans for the future are exciting, but those who own bikes know that there's  already a lot to love. At present the city of Chicago already boasts nearly 150  miles of designated bike lanes on city streets. There are 18 miles of lakefront  bike trails run between Hollywood Avenue in Edgewater and the South Shore  Cultural Center in the South Shore, Grand Crossing neighborhood. There are  10,000 public bike racks installed throughout the city, which is more than any  other city in the United States. Additionally, the Chicago Transit Authority (CTA) is a bike-friendly public  transit system, with bike racks installed on all buses and bikes allowed on  trains during non-rush hour times. A protected bike parking area on Kinzie Street was installed in just six weeks.  With all of this infrastructure, cyclists now account for 51 percent of the  traffic during rush hour. Other funded projects include turning an unused  elevated railway into a bike path and expanding the bike-share system to 5,000  bikes. During Chicago's “Bike the Drive” event each May, thousands of cyclists flock to Lake Shore Drive for a car-free  30 mile ride.

At the Lake Point Tower Condominium development, located on North Lake Shore  Drive, the building offers two different types of bike storage. There is a bike  storage room available to all. Additionally, for a modest fee, residents have  the option of using an upscale bike storage room which in addition to secure  bike storage, also provides equipment lockers for storage of bike helmets, and  other bike accessories as well as benches. This amenity is considered a plus to  residents of the development since the Lake Point Tower is close to the 18-mile  long bike path that runs along the lake front.

“Having the bike storage room in the building is so convenient,” says JoAnne Giancristaro, a resident of the development, “This is something that condo buyers are looking for. Space is at a premium in  our units, and being able to have a secure storage area is great. I'm spoiled  now, if I ever move—having a place to store my bike is definitely on the list of must-haves. It's  crazy to even imagine a building today that doesn't offer some sort of easy  storage.”

Taking a cue from such prestigious Chicago hotels, such as the Park Hyatt  Chicago and The James, some condo developments have even gone so far as  providing bike valet services. One such development is the Ambassador Towers  located on West Madison, residents can call ahead and ask that their bikes be  taken to the lobby.

But white gloves or no, bike storage tends to be easier to find in new  buildings. As of 2009, most new buildings, including multifamily residential,  have been required by the city to provide some bike storage. (Offering it is  also a relatively inexpensive way for a developer to gain points toward LEED  certification, which measures a building's environmental impact.)

The developers of 235 Van Buren—a new condo development located at the edge of Chicago's South Loop and central  business district that opened in 2012—planned multiple bike storage rooms for residents before construction even  began.

The Cheshire Condominiums, located in the Lincoln Park neighborhood, originally  set aside 36 spaces for bicycles, all free. Kenneth Coe, a board member of The  Cheshire and a bike enthusiast said, “unlike many initiatives the board proposed, there was unanimous support when we  decided to provide bike storage facilities. We started out with space for 24  bikes, and they filled quickly.” Coe pointed out that when those spaces were filled, they added 18 more. When  those were taken, they installed a two-tiered bike storage system in the garage  which provided room for 20 more bikes. Now, there is a plan to add enough  storage to accommodate other residents that are on the current waiting list.

The question that comes to mind is where are all these bikes stored.

While storage rules should be adjusted to a site's physical limitations and  allowances, this is a sample guideline for boards—a typical arrangement, set up by the directors at 30 East Huron, a 460-unit  high-rise in Chicago which boasts two locked bike storage facilities:

Bicycle storage spaces are available to residents only. Resident owners have the  right of first refusal regarding bike storage availability.

All bicycles must be registered with the Management Office.

Bicycles are not permitted in the lobby. All bikes must exit through the back  door located next to the loading dock.

Bicycles must be locked and stored only in the racks provided.

Neither Management nor the Condominium Association assumes responsibility for  the loss, theft or damage to any bicycle.

If the sale of a unit or termination of a residential lease results in an  individual moving out of the building, the bicycle space reverts to the  association for reassignment.

Failure to comply with the bicycle storage rules or to pay the associated fees  shall be sufficient cause for the 30 East Huron Board of Directors and  Management to revoke bicycle storage privileges.

What Does It Take to Create a

It may seem like a very simple idea, just take an unused portion of the  basement; fence it in; put a padlock on it; give a copy of the keys to bike  owners and—instant bike storage.

“The only issue that we debated is how we would provide bike storage, we didn't  want people chaining their bikes anywhere in the garage. After much  investigation we decided that the best way to go was with a specially-built  bike storage rack, which we were easily able to find online. The upside is that  they weren't that expensive and were easily installed, no need for any major  construction,” Coe explained.

Providing bike storage has also presented some boards with a new income  opportunity. Most developments charge modest fees, usually to pay for the initial investment.  Some developments in areas along Lake Shore Drive, charge upwards of $100 per  month.

In most buildings however, either the service is free or nominal, maybe $10 a  month. That small sum is mostly intended to discourage the leaving of unused  and unusable bikes in storage ad infinitum, rather than to raise revenue.

“We don't charge a lot for the storage,” says Coe. “Bikes are stored in an area that was pretty much unused. It was a no-brainer to  create this storage area, and people love it. We decided to charge only what it  costs us to operate the area, electricity, cleaning and to reimburse our  upfront costs. Having the storage area saves us money in other areas. We don't  have to clean the bike-trafficked lobby and hall carpets as much, and we don't  have to worry about repainting the elevator and hallway walls because of scuff  marks.”

When it comes to common areas, management has to define what is acceptable—and what is not—when it comes to bicycle storage. It's a challenge that seems to be growing with  each passing year, as the interest, and the list that makes bicycling a good  idea grows.

J.M. Wilson is a freelance writer and a frequent contributor to The Chicagoland  Cooperator. Associate Editor Liam P. Cusack contributed to this article.