Do not show again [X]
By Maggie Puniewska   2013 March Neighborhoods 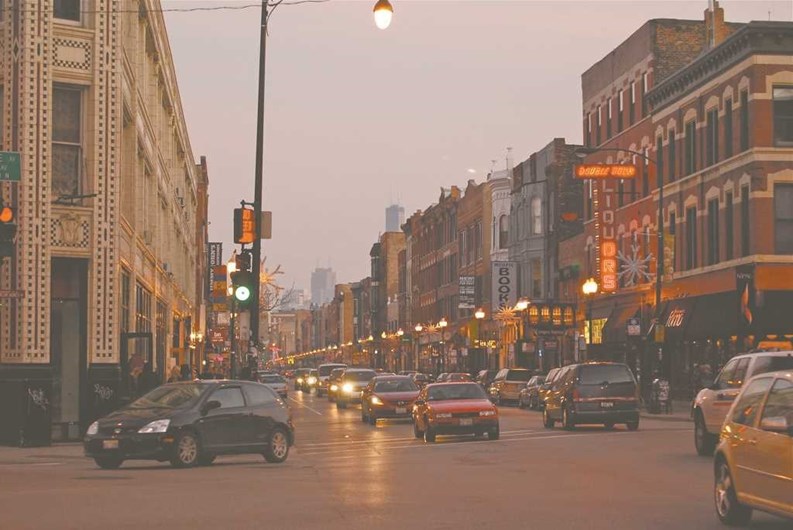 When Mrs. O’Leary’s cow supposedly in a fictional account set off the great conflagration that  became known as the Great Chicago Fire in 1871, an area subdivision known as  Wicker Park attracted large numbers of Polish immigrants looking for a familiar  place to call home.

Wicker Park is a Chicago neighborhood northwest of the Loop, south of Bucktown  and west of Pulaski Park within West Town. It came into being when namesakes  Charles and Joel Wicker purchased 80 acres of land along Milwaukee Avenue in  1870 and laid out a subdivision with a mix of lot sizes surrounding a 4-acre  park. The fire seemingly spawned the first wave of development, as homeless  Chicagoans looked to build new homes.

Wicker Park bears Chicago's creative soul. Strolling through this eccentric  neighborhood just northwest of the Loop and south of Bucktown, it is no wonder  that many refer to it as the beating heart of Chicago. Art galleries,  boutiques, restaurants are sandwiched between cafes, nightclubs and theaters.  Once heavily populated by Eastern Europeans and Scandinavians, Wicker Park is  now an increasingly diverse neighborhood bearing the works and craft of local  residents who work and play in this bustling community.

Wicker Park has been part of Chicago since 1837 and like many neighborhoods, its  commercial beginnings were rooted in industry. In 1857, the Rolling Mill Steel  Works opened near Armitage and Ashland, drawing many Irish immigrant laborers.  Clothing, furniture, musical instrument, cigar manufacturers and breweries, to  name a few, would eventually add to the industrial scene.

Wicker Park was next home to Chicago's wealthy German and Scandinavian  merchants. After the 1871 Chicago Fire destroyed the city's wooden buildings,  these prosperous families retaliated with opulent stone and brick mansions  close to Milwaukee Avenue that were sure to withstand the harsh flames should  fire break out again. Hoyne Avenue was known as "Beer Baron Row," as many of  Chicago's wealthiest brewers built mansions there. Other affluent residents  that settled in Wicker Park included the Pritzkers, Uihleins, Crowns, Carl  Laemmle (Universal Studios), Michael Todd, Saul Bellows, and Nelson Algren.  Uniquely, the upper and working class co-mingled gracefully in Wicker Park  during that time, unlike in other parts of Chicago where sharp economic  boundaries separated the classes.

At the end of the 19th century, the area was merged into the surrounding Polish  Downtown. These two neighborhoods soon became known as the “Polish Gold Coast." The area around Division, Milwaukee and Ashland to this day  retains the moniker Polish Triangle. During World War I, the provisional  government of Poland met in Wicker Park and World War II continued to inspire  Polish settlement in the area. Between 1939 and 1959, an estimated 150,000  Poles arrived as “displaced persons” and established tight-knit microcosms of shops, delis, churches, restaurants  and banks where everyone knew the language.

Beginning in the 1960s, Wicker Park began to change drastically. Latinos who had  been displaced by gentrification in Old Town and Lincoln Park began moving in  and by the ‘70s comprised more than 30 percent of the population. While there was some civil  unrest during these times, Wicker Park continued to hold on to residents and  businesses, due to its proximity to downtown via Milwaukee Avenue and the  elevated train.

In the 1980s, young professionals, artists and students began moving back into  Wicker Park lured by the low rents and multitude of housing opportunities. The  abandoned mansions of the 19th century were restored back to residential  status. Cheap spaces were transformed into galleries, theaters and restaurants,  paving the beginnings for the neighborhood's creative force.

Even during the times of steel mills and breweries, Wicker Park has always made  time for art. Historically active arts organizations and venues such as the  Chopin Theater, the Near Northwest Arts Council, and the Flat Iron Artists  Association have nurtured and supported emerging artists for many decades.  Built in 1918, the Chopin Theater has been home to innovative theater from  around the world. The Near North West Arts Council provides studio space, and  venues for showing art, film, theater, and music in the historic St. Paul's  Cultural Center since 1988. The Flat Iron Building, located in the center of  Wicker Park, has evolved into a collective of artist’s studios whose doors are always open, inviting passersby to take a look.

Today, Wicker Park is known for its local art scene and independent businesses  and is considered one of the most artistically dynamic spots in the city. The  Wicker Park-Bucktown Chamber of Commerce hosts several art festivals during the  year including the Bucktown Arts Fest in August and the Coyote show in the  fall. Both events give a local artisans and entrepreneurs the chance to expose  their works and crafts to the community. In July, Wicker Park Fest celebrates  the sounds of more than 20 musicians, with food and drinks provided by  community restaurants and cafes. The summer Green Fest celebrates  environmentally-friendly bands and vendors.

Fittingly, Wicker Park is home to many of Chicago's most prominent galleries  such as the contemporary AllRise Gallery. The 4Art Inc. fuses the artist and  the audience by letting each artist actually create art at his or her opening.  Gallery 203 and the Heaven Gallery provide space for up-and-coming artists to  showcase their work. Art can also be viewed at the Ukrainian Institute of  Modern Art which displays works by Chicago artists and artists of Ukrainian  descendants.

From steel mills to breweries evolving into cultural venues and artist  galleries, theaters and lofts, Wicker Park is a great place to live, raise a  family and come home to.

Maggie Puniewska is a freelance writer and frequent contributor to The  Chicagoland Cooperator. Managing Editor Debra A. Estock contributed to this  article.