Do not show again [X]
By Elizabeth Lent   2017 March Maintenance 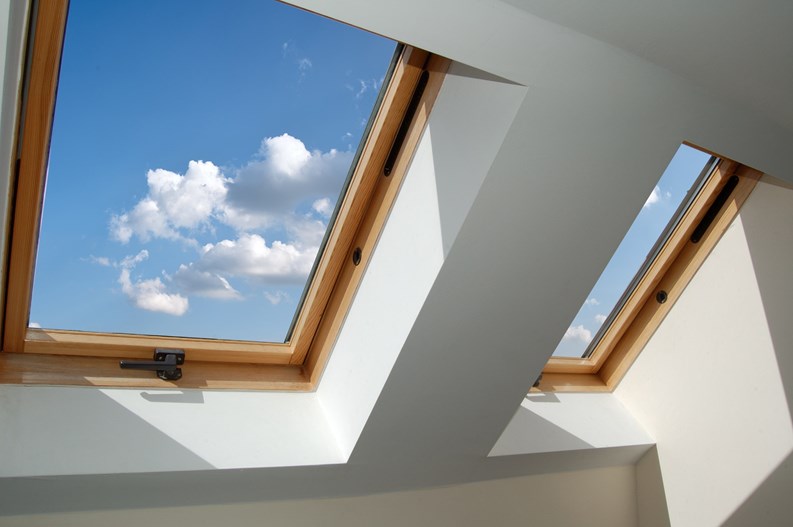 No matter what time of year, the addition of natural light into a living space can do more to boost the spirits of its occupants than just about anything else. For a dark kitchen, a gloomy study or a bedroom that lacks that special something, a skylight can bring that natural light into the mix and help completely transform a room. As an unquestionable bonus, skylights can offer, too, a window into a summer sky or a star-filled night.

“Skylights, of course, bring natural light in, but they also allow an owner to utilize less electricity,” says Sheila Culbertson, co-owner of Windy City Skylights in Downers Grove, illustrating how this particular installation can provide not only aesthetic value, but savings as well.

Best of all, as new technologies have developed, skylights have become less expensive, easier to install and nearly maintenance free. “For a long time, skylights were plastic,” says Mary Lou Hughes, owner of Nature Vue Skylights in Jacksonville, Florida. “Now they’re double-paned glass. They are so much more energy-efficient and durable than plastic. The interest in skylights has really grown because they are more energy-efficient and are better products now.”

There are skylights to meet the tastes and design standards of just about any homeowner. “VELUX is the most popular manufacturer on the market,” says Rick Music, residential project manager at All American Exterior Solutions in Lake Zurich. “They offer skylights in multiple sizes and different types, including deck-mounted, curb-mounted and sun tunnels.”

“And VELUX specifically has come out with a clean, quiet and safe glass,” adds Culbertson. “It offers a Rain-X-esque quality such that it does not spot as easily from precipitation. And when I say ‘safe,’ I mean that it’s laminated. It’s that double-pane glass with argon between the panes.”

Music estimates that the majority of skylights he installs in residential buildings are deck-mounted. That means they are nailed directly into the roof deck, which is the foundation that serves as a base for the whole roofing system. By contrast, curb-mounted skylights are mounted on a wooden frame – called a curb – that is built around the opening on the roof. The VELUX Sun Tunnel skylights are basically capped tubes that are inserted in the roof and create a “tunnel” through which light enters the home.

Greg Header, CEO/owner of the Pennsylvania-based Solar Innovations, says that curb-mounted skylights are usually the best bet for multifamily buildings in an urban setting. The four-inch curb height recommended in New York properties, for example, “helps keep water out of the building, especially in those with flat roofs.”

Header adds that skylights on a curb are also more accessible than deck-mounted models — so in 30 years, if tastes change or any component of the skylight requires repair or replacement, that’s much more easily accomplished. “If you do these properly, they can last as long as the roof,” he says.

In communities and associations comprised of more traditional stand-alone homes, Hughes says tunnel lights are becoming increasingly popular. Whereas traditional skylights require a carpenter to build a well in the ceiling so that the light can come through, the installation of a tunnel light takes far less time and effort. “The tube takes one person a couple of hours to install while the traditional skylight can take two men a full day for the framing, insulation, drywall, painting and trim,” says Hughes.

Other pluses for the tunnel light are cost, with tunnels coming in at a little over a third of the cost of a more traditional two-foot by four-foot skylight. Because the inside of the tube is made of aluminum, “It’s like a mirror, and reflects a lot of light,” says Hughes. In fact, “a 14-inch diameter tube skylight will light up the same area as a two-foot by four-foot skylight.”

For those looking for an inspiring view of the sky though, more traditional skylights remain the best bet. And as Culbertson points out, they can now be equipped with solar panels that allow them to open and close – or be affixed with light-powered shades that close or retract – without any cumbersome and unappealing electrical wiring.

Anyone who grew up in the 1970s with a skylight in the house recalls the inevitable cloudy glass, the leaves and detritus of spring and autumn getting wedged around the edges, the occasional drop or drizzle of water finding its way down from the ceiling. Thankfully, today’s skylights have little in common with their ancestors. Most of the concerns – real or imagined – that homebuyers may once have had about skylights have been close to eliminated.

A good skylight experience begins with hiring the right people to do the installation. A typical job will require a carpenter to build the interior portion of the skylight. They will cut the drywall, insulate the shaft and take care of the pilot holes where the skylight unit itself will be placed.

Then, says Music, a roofer will cut the plywood on the roof, level it off, place the skylight, install the flashing, and replace the shingles. While the roof installation may take four to six hours, the interior work will take longer as the carpenter works not only to finish off the shaft but also to return the ceiling to its pre-installation condition.

For individuals who live in a more traditional home within an association, Header suggests first looking for examples of the type and style of skylight unit the owner might want, and then consulting a reputable manufacturer on the installation process and cost estimate before taking the request to the community’s manager. “If you go with nothing in hand, they’re more likely to say no,” he says.

Hughes recommends in-home consultations for residents before they commit to any purchase. “Light is a very personal thing,” she says. “One person might want one skylight in the kitchen, while someone else might want three.” Having those early discussions will help ensure satisfaction with the final result.

No matter what other choices are made about style, size, placement or anything else, Hughes reminds residents that “you always want to have a licensed and insured contractor before anyone works on your roof.”

Once installation has been completed, residents, boards and managers will want to ensure that their new investment lasts as long as possible. The risk of any deterioration in a skylight depends for the most part on the style of the skylight and the roof on which it is being installed. “A cedar shake roof that requires maintenance because it splits could let in ice and water, and that could affect the skylight,” says Music. “With a shingle designed to last 50 years, though, there aren’t a lot of problems.”

Any problems that develop with the skylight tend to be the result of water infiltration. “If a skylight seal is broken or breached, you’ll see condensation, discoloration, mildew or cracking with the drywall,” says Header. In addition, he adds, “If the skylight is in a shaft, the heat [from inside] can build up. If that’s not ventilated properly and you get too much extreme heat or cold, it can really begin to wear on the interior drywall.”

With proper installation however, the vast majority of those issues can be avoided. “The owner shouldn’t have maintenance issues if the skylights were put in correctly by a five-star, trained installer,” says Culbertson. “And a reputable company will give you a warranty on their installation.”

Inspecting skylights during regular roof inspections is one way to monitor the health and well-being of the glass, flashing and perimeter of each individual skylight. “The skylight is part of the roof, so whenever you have that checked, you want to check the flashing on the skylight as well,” says Hughes. “But if everything was done correctly in the beginning, you shouldn’t have to worry about them for a very long time.” In fact, Hughes continues, “There really is not much to do. Traditional skylights are self-cleaning. For 99 percent of skylights, no one ever has to do anything.”

Skylights can also be a good indicator of how well the HVAC system of a building or home is working. If it is pumping out any dust, it may end up in the glass or light well of the skylight, which will then require some vacuuming or a good sweeping out.

The glass in contemporary skylights also has been designed to cut ultraviolet rays in order to save furniture and flooring from any potential sun damage, says Music.

Ultimately, for unit owners and shareholders who value a window into the natural world, the rewards of a skylight far outweigh the costs. They can brighten the gloomiest corner of a home, whether a hallway, kitchen or living room, giving a new look and fresh perspective to the space. And in the darkest days of winter, when the general mood hovers at its lowest point, skylights can bring back the sunshine and a reminder that better days are ahead.

Elizabeth Lent is a freelance writer and frequent contributor to The Chicagoland Cooperator. Mike Odenthal contributed research and writing to this article.