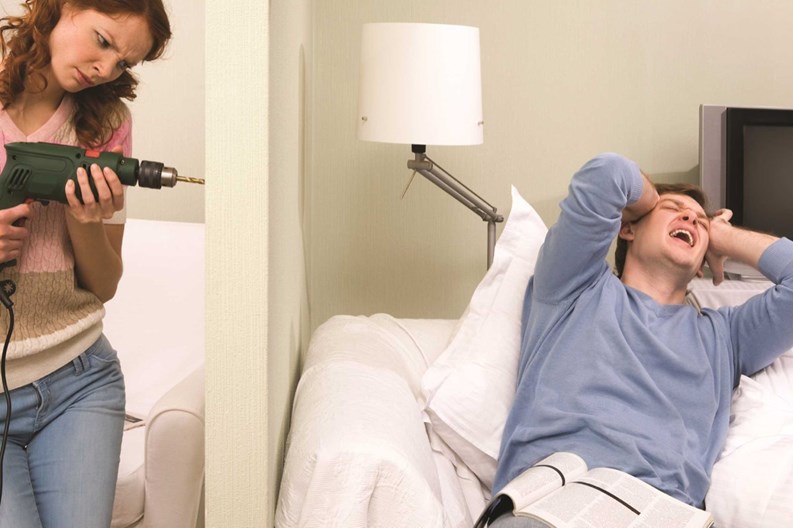 As an attorney and an apartment dweller, Michelle F. has seen it all when it  comes to living with difficult residents. “I lived next door to twin toddlers whose parents were both attorneys,” says Michelle, who in addition to being a real estate attorney is also a member  of the national Association of Real Estate Women. “They took turns sleeping late and brought the kids to the kitchen early. Every  morning, one child screeched at the crack of dawn.”

Wanting to keep peace, and understanding parenting challenges, she didn’t complain to the neighbors until one morning when she had been suffering with a  bout of the flu and finally fell asleep around 4 a.m., only to be awoken once  again by a screaming child. “I was banging on the walls out of desperation, but the father screamed back ‘get used to living in an apartment!’” she says.

Can't We All Just Get Along?

The reality is that while most condo buildings or HOAs will, at one time or  another, have difficult residents—a noisy neighbor, a chronic complainer, or perhaps a more difficult tenant who  habitually breaks the house rules—Michelle and her other neighbors do not have to just ‘get used to it.’ There are several steps that should be outlined in the association bylaws that  residents, management and the board can take to effectively solve the problems  of objectionable tenants and cultivate a positive neighborhood atmosphere  throughout the association.

Neighbors can complain about a host of things, but some of the most common  complaints from people living in close quarters of a condo complex include  noise, smoking and cooking smells, leaving belongings in shared hallways and  vestibules, stealing laundry, and leaving exterior doors unlocked or ajar.  Leaving a bike or a pile of toys outside your neighbor's door is a pretty  clear-cut violation of their space, but because the concepts of 'noise' and  'disruption' are so subjective, dealing with them is somewhat trickier.

According to Judge William Huss, co-author of Homeowners Associations and You:  The Ultimate Guide to Harmonious Community Living, (Sphinx Publishing; 2006), a  vocal tenant morphs into an ‘objectionable’ tenant: “[When] the person who is complaining interferes with the normal atmosphere of  the association’s activities.”

As many of us know, what is considered normal is in the eye (or ear) of the  beholder, it is therefore important to know how to deal with residential  conflict in a mature and timely manner. Simple—but not always easy. There are many approaches to problem-solving with a  difficult resident, depending on the nature of the problem. Most pros agree  that solving neighbor-to-neighbor problems should generally start between the  neighbors themselves.

“The first step is to try and have a conversation with them, not in the heat of  the moment, but at a time when everyone has cooled off,” says attorney Jill Tanz, a partner at Chicago Meditation LLC, who believes that  calm and collected conversation is the first remedy to conflict. Residents can  even turn to the management to act as an informal mediator, she says. In either  case, the conversation should focus on the specific problem, triggers and  solutions.

“I think what you want to look at is exactly what it is about the behavior that  is causing the disruption. Is it the time? Is it the volume? Is it a pet? What  is the problem? And then try and come up with like ways in which it can be  resolved, so that those neighbors can live their life with as little disruption  as possible,” Tanz explains. “For instance, if the problem is a dog, perhaps it can go to obedience training  or be kept in a different part of the house.”

While being level-headed can be difficult in these situations especially if they  are recurring, taking time to gather your emotions can make or break conflict  and set the tone for further confrontations.

“You don't want to give your neighbor a piece of your mind when you are upset,” says Keith Hales, president of Hales Property Management, Inc. in Chicago. “Take time to relax, politely discuss the issue but get your point across  clearly. It's all about how you present something to someone. If you come  across as being tactful, your neighbors are going to be a lot more receptive.”

Go to the Books

The bylaws and rules of your building or HOA can also reveal the correct  timeline in addressing noise or routine disruptions in your condo or co-op.  Hales describes an instance in which a unit owner didn't fill out a complaint  form as directed by the regulations of the community in order for the board to  take action. The board obviously didn't attend to the problem, and the owner  took matters up in his own hands which caused more disruptive behavior. Cases  such as this stress the importance of following communities' rules to ensure  the situation is resolved as quickly and efficiently as possible.

Turning to the bylaws can also help remove any personal baggage from the  situation. “Try to find the impersonal rule that can be applied more objectively, and [the  resolution] may be more peacefully accepted than just 'you're bothering me,' ” says Tanz.

Such was the case in Michelle F’s situation, when her neighbors abruptly moved after being cited repeatedly for  not complying with the condo's rule mandating that 80 percent of their floors  be carpeted to muffle noise.

In cases where moving isn’t really an option for either party, yet one resident’s behavior is upsetting his or her neighbors’ ability to enjoy their residences peacefully, it’s the primary responsibility of the board and management to look into and  resolve the problem once a unit owner has initiated a complaint. How the board  acts will depend largely upon what’s laid out in the community’s bylaws.

When the board gets involved, it’s their duty to residents to act on their behalf and investigate the problem.  Management pros recommend that boards and management conduct their own internal  investigation to determine the depth and legitimacy of the problem.

“The first step is for the association to send a stern letter to the offending  owner or occupants (in the case of a guest or tenant with a copy to the owner)  threatening sanctions such as the imposition of a fine unless the owner or  other occupant creating the disturbance immediately and permanently ceases the  offensive activity or behavior,” says Allan Goldberg, an attorney at the Chicago-based law offices of Arnstein & Lehr, LLP.

Should this be ineffective, the board could also hold a public hearing in order  to gain input on how to proceed with the case. “A board hearing to consider fines and other sanctions is a perfect vehicle for  board and owner dialogue about the problems and offensive behavior. This forum  also gives the owners and other unit occupants the right to cross-examine the  complaining witnesses,” Goldberg explains.

Another option residents and management have is to hire an outside mediator to  do the job. Although this is a lesser-known and utilized approach, it may prove  beneficial, especially when resolution is far in sight.

“There are party mediators that can come in and help have a conversation and use  skills that your typical property manager or your typical neighborhood service  has not been trained to do and may be able to resolve the situation,” says Tanz. “There are community mediation services that provide free services in many areas  or you can hire a commercial mediator who may very well be able to resolve the  situation without you having to consider legal action.”

Even seasoned professionals regard litigation as the option of last resort.

If your board has tried negotiating, mediating, and friendly-but-firm directives  to get a problem resident to change their disruptive ways is to no avail,  voting them out of the community may be the next—and final—step in solving the problem. And if an association board can show that they  followed their own rules and acted according to their fiduciary and  administrative duty to their community, chances are the courts will defer to  the board's judgment on behalf of their residents.

In the end, dealing with a disruptive, unpleasant, problem resident is hard on  everybody—both the disruptive resident’s neighbors, as well as the association board and building management. That  said, neighbors, boards and management, who work together to resolve problems  efficiently and effectively will find that most residents do not really want to  cause problems—they just want to have their complaints heard and remedied.

Lisa Iannucci is a freelance writer and a frequent contributor to The  Chicagoland Cooperator. Editorial Assistant Maggie Puniewska contributed to  this article.