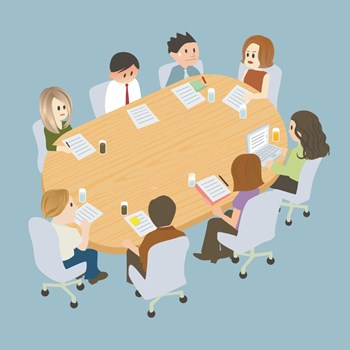 Read any of the major business publications or websites and you’re bound to find articles on the importance of delegating. It’s one of the most fundamental skills for a successful business owner to have. A simple Internet search finds scores of tips for CEOs and smaller entrepreneurs alike on how to delegate more effectively. Running an association isn’t quite like running a Fortune 500 company, but the concept of delegating tasks works just as well with a board of directors for a homeowners association as it does for a titan of industry or finance.

Boards of directors are small teams of volunteers with a lot of work to do. They often need help and that’s where delegating to a committee comes in. A committee is a group of volunteers that focus on a particular issue at hand. They are run as a mini-board, where a chair is elected, topics are discussed and minutes are reported. They take those minutes to the board. How many committees an association has and their responsibilities will vary from property to property, as will the committee size. Most commonly, the larger the association, the more the amount of committees the board will create. Ultimately, it’s the board’s responsibility to create the number and type of committees and help to define their purpose.

Strong, well-organized committees are a boon to a busy board and manager. “We put together a large capital expenditures committee when we were obtaining financing for a roofing project and we needed $600,000 for an expansion on the clubhouse,” says Bill Lopina, principal owner and CEO of Accenture Management Group, LLC in Joliet. “The committee of residents facilitated the design drawings, changes, financing, you name it from top to bottom. Then they brought the recommendations to the board as to what was most effective and most crucial.”

“What kinds of committee an association has depends on their community structure,” says Randy Grimes, director of portfolio management at FirstService Residential in Chicago. “Some larger associations have committees for roof replacement, decorating, architectural review, and a house committee that reviews personnel and rules. There are other smaller committees too, such as welcoming committees that deal more with the community relations of the building.”

We the Committee, People

Members of the committee might also include members of the board. “For example, on the budget committee, the treasurer of the board would probably be on that committee,” says Grimes. “It goes back to the community. You want to bring in as many people as you can to feel like they are a part of something bigger.

Grimes encourages every community to do a posting similar to a board meeting and invite everyone to attend, to share concerns and comments.

The size of the committee is extremely important to its success. “Most boards are three to seven homeowners and more than that is counterproductive,” says Lopina. “If you start getting into 10, 12 or 15 people, you can’t get anything accomplished because there are too many individuals with different ideas going in different directions.”

Lopina’s associations have monthly board meetings that meet every third Thursday and a committee liaison attends these meetings and presents findings, decisions and any requested information to the board so they can vote if necessary.

“There is conversation among management and the board on a weekly basis about what took place in the prior week’s meetings and discussions,” says Lopina. “But all the findings are presented once a month in a formal presentation to the board.”

Just like conflicts that can occur among board members and in board meetings, committees can find themselves in the midst of a conflict too. Let’s say that unit owner John Smith wants to serve on the grounds committee, yet he is the owner of the Amazing Smith Landscape Company. The landscaping committee’s job it is to present the board with new information on a landscape contractor. It seems like a conflict of interest, but it isn’t.

“I have no problem with him being on the committee, because the committee cannot vote on expenditures,” says Lopina.

According to Lopina, the committee can provide data and background and present findings to the board on bids for a half million dollar roofing project or on a landscape contractor, but cannot vote for himself to get the contract.

“Having someone on the committee who knows the industry can be helpful. But even if the committee recommends someone it doesn’t mean the board has to go with their decision. The decision is ultimately made by the board of directors.”

However, let’s say the same landscape committee has one resident who wants to do a minimalist green-scape, but another wants to do something exuberantly floral, and they can’t agree. “Whenever there is a conflict, most will ask management for their opinion to assist with the process or tell the board that they are at a standstill,” says Grimes. “The committee members may go back and look at the pros and cons of doing each project, but ultimately the board will have the final decision. It’s important that the committees have people with great backgrounds and experiences who can bring something to the table and then the managing agent can offer an opinion. Sometimes, however, we have to go to mediation.”

Committees are counterproductive when the duties or authorizations are not spelled out, Cheryl Murphy, the executive director of the Illinois chapter of Community Associations Institute (CAI-IL). “It is important to have clear rules and guidelines for what the committee will do and what the board and managers will do,” Murphy says. “Each committee needs to clearly understand its purpose, responsibility, authority and budget. Without this knowledge, any committee can become counterproductive.”

“The final authorization should remain with the board of directors,” says Grimes. “When a board says ‘authorize a committee,’ it should mean ‘we’re going to take your recommendations and base our decisions on those recommendations.’”

How often a committee meets also depends on the type of committee it is. “A budget committee meets more often than a summer picnic committee,” says Lopina. “For example, the finance committee probably meets quarterly for the first nine months of the year. Then they meet several times a month from October through December. During the year, they meet with the treasurer of the association, get the financial records and see where expenditures are for that quarter. They will start meeting more as it’s time to get closer to doing the budget. Then they’ll fire that up in September and October so the board can get the budget out to the homeowners by year end.”

If it’s a budget committee, it depends on the scope of the budget,” says Grimes. “Some have active participants reviewing it quarterly and larger committees work on special assessments or larger projects and are more involved and even have a subcommittee that do quarterly reviews and make comments to the treasurer.”

However, a welcoming committee may not meet as much, if at all, but instead members have the responsibility of providing an envelope with local information and maybe a small basket of goodies to each new homeowner who moves into the association.

“A few of the residents will go over to the new resident and talk to them, have a cup of coffee and see if they have any questions,” says Grimes. “I haven’t heard of a bad committee. Every committee has a form and function, but it’s important to understand what that function is.”

Along with providing added help to boards, committees are also beneficial to residents in that they promote a collaborative environment, ultimately leading to the creation of a better community. “The more networking and collaboration a community can create, the stronger the community will be, mostly because its members will be more involved in the activities and decision making process,” Murphy says.

Lisa Iannucci is a freelance writer and a frequent contributor to The Chicagoland Cooperator. Editorial Assistant Enjolie Esteve contributed to this article.