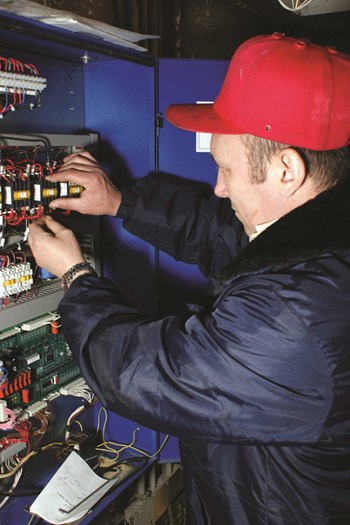 There are approximately 22,000 elevators and moving conveyances in the city of  Chicago—and that number almost doubles when you add in the surrounding communities in  Illinois. A great number of these elevators are in condominiums and it’s vital that those in charge understand the codes and maintenance that is  required to keep them running smoothly.

There are two basic kinds of passenger elevators used throughout Chicago’s residential buildings: traction and hydraulic. The latter is operated by means  of a hydraulic ram, consisting of a piston mounted below the elevator inside a  hollow cylinder and adjoined to an electric pump motor. The elevator rises when  a liquid substance—usually oil—is pumped into the cylinder. To lower the elevator, the liquid is released from  the cylinder by way of a valve.

The more expensive traction elevators are hoisted by a set of four to eight  cables that are threaded over a grooved pulley known as the sheave at the top  of the shaft and affixed to a counterweight that rises when the elevator  descends, and vice versa. The sheave is turned by an electric motor; in  gearless traction elevators, the motor is directly attached to the sheave, and  in geared traction models, the motor is engaged to a gear train that turns the  sheave. Since the counterweight weighs about as much as the elevator when  filled to about 40 percent capacity, a traction elevator takes relatively  little energy to operate.

“As technology goes, elevator improvements go at sort of a slow to medium pace,” says Rob Bailey, president of Mid-American Elevator, Inc. in Chicago. “There’s been changes in the computers and the motor drives that run elevators in the  last 10 to 15 years, and an influx of foreign-made equipment that people need  to stay on top of.”

The American Society of Mechanical Engineers (ASME), with input from the  Elevator Manufacturers Association of the United States, published the first  safety codes for elevators and escalators in 1921.

According to Carl Byrd of the Chicago Department of Buildings' Bureau of  Elevators, in the state of Illinois, someone who works on elevators needs to  have proper certification and a license.

“They operate under elevator code, A.17.1, which is 350 pages of rules and  regulations that all mechanics and maintenance workers must adhere to,” he says. “It is the mission of the Bureau of Elevators to inspect all elevators in our  area in a timely manner.”

A number of elevator contractors in Chicago are union contractors with the  International Union of Elevator Constructors (IUEC) and requirements for  certification includes a five-year apprenticeship program that includes weekly  classroom training and then five years of specified on-the-job training.

Qualified Elevator Inspector (QEI) is defined as a person meeting the  qualifications, who is engaged in the inspection and testing of equipment  within the scope of ASME A.17.1. This code covers the design, construction,  operation, inspection, testing, maintenance, alteration, and repair of the  following equipment, its associated parts, and its hoistways, where located in  or adjacent to a building or structure. Continuing education is also required  for most QEI inspectors.

ASME has a checklist that should be used by an inspector to determine code  compliance to the effective codes for that specific elevator, and all  components of the elevator need to be checked for compliance. Tests are  required to be performed by elevator personnel and witnessed by a QEI certified  elevator inspector.

In today’s ever changing and highly competitive environment, building owners and property  managers find that outdated elevator systems are a major reason for resident  dissatisfaction.

“Advancements in technology have changed the way in which an elevator system  functions. This perception has a direct reflection of the building itself,” says Ray Zomchek, president of Colley Elevator Co., in Bensenville. “Modernization will not only improve the aesthetic appearance of your interior  and exterior, but will bring your elevator up to current city codes. Most  importantly modernization of an older elevator unit will greatly improve  performance and safety throughout your entire system.”

Elevator modernization includes updating of an elevator’s equipment to make it more reliable, bringing it up code compliance, reducing  repair expenses and increasing the overall safety of the elevator system.

“The last thing anyone wants is for a resident to get stuck in an elevator,” says Shukarullah Malik, president of Pascal Elevator Company in Berwyn. “An elevator has a normal service life of about 25 years, so if your condo is  utilizing a system that was put in place before 1985, the problems may become  more serious. In older elevators, the control system—which can frequently mean the computer or motor drive—is becoming obsolete. Technology changes really fast so that computer is  becoming a real antique and that is going to need to be changed.”

Vital as they are, it comes as no surprise that elevators are a huge investment.  A typical new condo elevator, 20 stories, is $250,000 and up.

“If you take care of it and do the proper preventative maintenance, which would  be maybe 2-3 hours a months, it will last 25 to 35 years,” Bailey says. “Price has become a huge issue on the marketplace the last three years, and  everyone is looking to save money and scrimping on the maintenance. You may be  saving money up front, but you may only get 15 years of service.

A first-rate elevator maintenance program for a 20-story elevator will normally  run around $500 a month.

“Preventive maintenance is imperative,” Malik says. “An average elevator life span is 25 to 30 years, so it is important to keep the  entire system in shape so that safety doesn’t become an issue. We list things that an owner should look for; if you hear  strange noises, if you go to the machine room and you see stuff spewing red off  the ropes, the grooves get worn out, the controller starts to smell funny, oil  is leaking…these are things that can signal trouble.”

“The basic stuff involves cleaning and lubricating,” Bailey says. “There’s a lot of equipment up in the elevator machine rooms and in the elevator  hoistways that needs to be cleaned and lubricated. Then there’s checking all the safety devices. There’s a couple dozen that need to be checked for proper operation.”

Zomchek says that by having a regular, on-site preventative maintenance program,  it will save money in the long run.

“It provides a higher level of reliability by addressing issues before they  result in shutdowns, it extends the service life of the elevator by replacing  or repairing parts before they cause additional wear on other components and it  allows for better financial planning by smoothing expenses rather than  incurring unplanned repairs,” he says.

Staying on top of elevator maintenance should be a priority at all times, but it  becomes even more important in buildings with disabled or elderly residents.  Even minor malfunctions can cause serious problems for those who can’t make it up the stairs.

“Let’s face it, if you step into an elevator and it runs to the next floor without  any surprises, you are a happy camper,” Malik says. “When the car jerks and makes noises and all of a sudden it goes down and your  stomach comes up to your throat, those are the things people hate.”

The “3 x 5 Rule,” which refers to a maximum distance in inches between the exterior doors and the  interior line of the hoistway and interior door (or gate) that rides with the  elevator car is the issue that most condos may experience if something goes  wrong.

There can also be problems with doors closing, the elevator not leveling off  properly, intercoms shorting out and other repairs.

“The most common thing that will shut elevators down is a problem with the doors,” Bailey says. “The doors have electrical switches on them so they need to be closed and locked  before the elevator can run. If you get garbage or gravel or other stuff in the  sills, it can stop the doors from closing and the elevator from running.”

To rectify this, a condo’s staff can vacuum the area and make sure that it’s clean at all times.

Lights going out is also a situation that scares people into thinking there’s a problem with an elevator and that’s something that a staff member can do if it’s not part of the maintenance program.

Aside from those concerns however, a building’s maintenance staff should stay away from doing even minor repair work on any  elevator.

“You hear the horror stories where building maintenance guys have looked at  things and had body parts chopped off,” Malik says. “We went to four years of school and on-the-job training, and we had to get  licensed in order to understand the safety issues and mechanic issues. We can  go up to the machine room where it’s safe and do our work and can get that elevator fixed and running again. It’s a big no-no when people who are not licensed. People are way out of their  realm if they think they can fix this.”