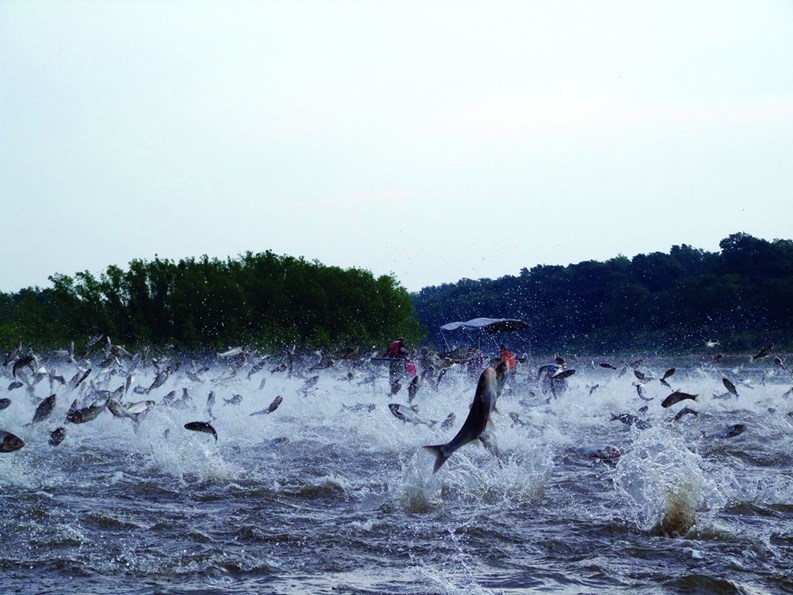 A pair of Asian carp made headlines last spring when they were found in the  Garfield Park Lagoon. Although officials from the Department of Natural  Resources think they were long-term residents, possibly remnants of a fisherman’s bait bucket, the discovery highlighted the mounting concern about this  invasive species in the region.

Don’t Carp About It

An estimated $12 million was spent last year on efforts to stop the invaders  from reaching Lake Michigan and wreaking havoc on the fishing industry of the  Great Lakes. Initially introduced to control algae in commercial fish ponds,  the prolific Asian carp have populated the Mississippi River and its  tributaries, and are now threatening to take over the Great Lakes as well. A  host of solutions, including the installation of physical barriers to keep the  fish from moving into Lake Michigan, have been proposed, and the debates over  which route to take continue.

But while the fish are grabbing headlines, state officials and landscape  professionals are working diligently to educate the public about a much less  visible invasion force sweeping through the region. In June 2008, a beetle  captured on Chicago’s South Side was identified as an Emerald Ash Borer—and since that time, the EAB has been the subject of an intensive pest-hunt  throughout Chicagoland.

City, state and federal crews have been aggressive in their attempts to manage  the infestation, because the borer itself is aggressive, and Chicago is home to  a lot of ash trees. Millions of trees across Michigan, Ohio, Illinois, Maryland  and Canada have already been destroyed by the beetle, and tens of millions of  dollars have been spent on efforts to stop the insects from eating their way  across more territory.

“They came from Asia, and they’re killing ash trees—whether the trees are healthy or unhealthy,” says Tom Tyler, an ISA-certified arborist with Bartlett Tree Experts. And they’re so aggressive that “if you have ash trees, you will have borers,” Tyler says. “The spread of these insects has been exponential. They increased gradually in  the first few years, but as they gain a foothold, the curve goes sharply  upward.”

The borers, which have gained that foothold over the past three or four years,  have grown into a “significant problem” for properties across the region, agrees Michael Scheitz, nurseries director  for Goodmark Nurseries LLC in Wonder Lake and South Branch Nursery in Union,  Illinois. “Typically, from the initial infestation, it’s on one to three years before the total death of the trees,” he says.

At one time, Scheitz notes, about 30 percent of the trees on area properties  were ash trees of one variety or another: “Green ash, mostly, and white ash, secondary. A lot of condo properties used  them, especially around parking lots because they’re tough trees and tolerated poor soil conditions.” That reliance on ash trees, however, has exacerbated the situation, now that  the borers have moved in.

“The key,” Scheitz says, “is diversification.” As ash trees are removed, arborists are replacing them with many different  trees like State Street Maples, Marmo maples, various cultivars of oaks and new  varieties of elms.

Ironically, many of the ash trees that have graced Chicagoland streetscapes in  recent decades were planted in the wake of a similar problem: the destruction  of American Elms. First reported in the United States in 1928, Dutch Elm  Disease—spread by the elm bark beetle—swept through the Chicago area in the 1960s. When the elms were lost, they were  replaced in large number by ash trees, notes Jennifer Crump, an arborist with  Christy Webber Landscapes in Blue Island, Illinois. “When Dutch Elm Disease came along, they stopped planting elms and brought in the  ash trees, so many of the street trees out there now are ash,” she says. As fate would have it, the ash trees were unprepared for the  onslaught of borers a half-century later. “The Emerald Ash Borers had never been in the United States, so the trees don’t have the chemical properties to protect themselves. They’re sitting ducks for the borers.”

The Emerald Ash Borers have, in large part, been spread through the movement of  firewood from one area to another, says arborist Leisa Schlichting of Christy  Webber. “People moved firewood from Michigan to their summer homes, and the borers moved  with it.” Today, firewood transportation out of the state of Illinois is prohibited.

According to the Illinois Department of Agriculture, the U. S. Department of  Agriculture “has the entire State of Illinois federally regulated (quarantined) for Emerald  Ash Borer as it considers the entire state of Illinois to be generally  infested. Federally regulated articles include ash nursery stock and green  lumber; any other ash material including logs, stumps, roots, branches, as well  as composted and non-composted wood chips. Due to the difficulty in  distinguishing between species of hardwood firewood, all hardwood firewood,  including ash, oak, maple and hickory are regulated articles.” Despite the prohibition, “you still see people hauling firewood around,” unwittingly spreading the infestation, Schlichting notes. “It’s almost impossible to catch everybody.”

“The Emerald Ash Borers are here to stay, but it’s a manageable problem if you keep them out of the areas that have not been  infected,” Schlichting says. The problem is that the borer infestation problem isn’t obvious until after it’s well-established—and by then, it’s generally too late for infected trees.

The first step for association boards, Tyler suggests, is to identify the ash  trees on their property and have them evaluated by a certified arborist. “There are effective treatments available,” he says. Treatment is most effective, he adds, if taken before the insects have  moved into a tree. Properties with a single, signature tree might want to make  the effort, but properties faced with treatment of numerous trees may find it  prohibitive.

Because of the cost involved—the treatments have to be repeated year after year—most property owners will opt for removal of infected trees. “The bigger the tree is, the more it costs to treat it. You can sustain it, but  as the tree gets larger, the efficacy of the treatment starts to go down,” Crump says, and eventually, it’s likely the tree will be lost despite the effort. “The best thing is to develop a replacement plan,” she urges.

While the Emerald Ash Borer is clearly at the top of everyone’s list for the biggest local pest problem today, plant professionals agree that  property owners and managers should keep an eye out for other invaders, too. “Japanese beetles attack the linden trees,” Scheitz says. “They don’t necessarily kill them, but they do make the trees look bad in the summer,” turning leaves into skeletons. Exacerbating the problem, Scheitz notes, is that  the trees comprising a community’s landscaping are already stressed by drought, making them more vulnerable to  the ravages of insects and diseases.

On a small scale, the best way to get rid of those beetles, says Cindy Terrell,  a plant health specialist at Christy Webber, is to remove them by hand. To get  ahead of the curve, professionals will treat the turf to kill the grubs that,  if left to mature, will become plant-eating beetles, she says. A  horticulturalist, she notes, can advise property owners as to the extent of the  grub infestation, and also identify whether grubs in the turf are actually  Japanese beetle grubs.

While bagworms—that particularly enjoy feasting on arborvitae and red cedar—have traditionally been found farther to the south, they have been creeping  northward into Chicagoland, attacking trees along the way, Crump says. “They can completely defoliate a tree within a season or two.” Along with their favorite plants, they’ll also attack a variety of conifers and deciduous trees including pine, spruce, juniper,  willow, elm, apple, maple and oak.

Bagworm larvae build cases of foliar debris around themselves and feed from  within this protective "bag" containing up to 1,000 eggs that over winter stay  in that comfy home before emerging as hungry larvae in the spring.

Plants Can Invade, Too

Along with preparing for battle with the bugs, association boards and managers  will need to keep an eye out for invaders from the plant world, too.

The buckthorn is an invasive small tree whose seeds are spread by wildlife. “When it’s in a natural area, it’s very aggressive and pushing out the native flora,” Tyler says. Often seen at the edges of a tended property, if given a chance, the buckthorn—originally introduced to this area from Eurasia as an ornamental shrub—will happily grow into an impenetrable thicket.

“They’ll pop up in a yard, and people will take care of it as if it were a small  (ornamental) tree,” Tyler notes. But give the plants an inch, and they’ll take over the yard.

Landscapers and property owners need to be vigilant, and embark on a program of “aggressive removal” and treatment with herbicides. “On a smaller scale, you can just remove them by hand, and grind out the stumps,” Tyler says, but if the buckthorn has gained a good foothold, that becomes  cost-prohibitive.

According to the University of Illinois Extension, “spring can be a good time to remove buckthorn plants before they get  heavily-leafed out and start to fill in the understory of a wooded area.” Because the “exotic species” produces leaves before most native plants start to green up, buckthorn is easy  to identify at this time of the year.

The university educators suggest that “early detection and control is recommended before the plants get too large and  abundant in a given area.” Included on a list of “Worst Invasives” by the USDA Forest Service, exotic buckthorns—used in the past as hedges in many urban areas—are no longer allowed to be sold as ornamentals in Illinois. As of 2004, there  arelegal restrictions prohibiting the sale or propagation of these plants in the  state of Illinois.

Keeping the invasive flora and fauna under control, professionals say, is really  a matter of education, and landscape experts and arborists who work with  homeowner associations have been spreading the word through meetings with  association boards, owners and managers. The government has also poured money  into outreach programs to alert residents to the dangers lurking in the  landscape.

“There’s a lot of education outreach,” Schlichting says. “The programs are out there, but a lot of people don’t quite understand the ramifications yet.” It may be hard to accept, she says, that “the invaders are good at what they do. The procreate quickly and can take over a  property very fast.”