Do not show again [X]
By Denton Tarver   2011 December Security 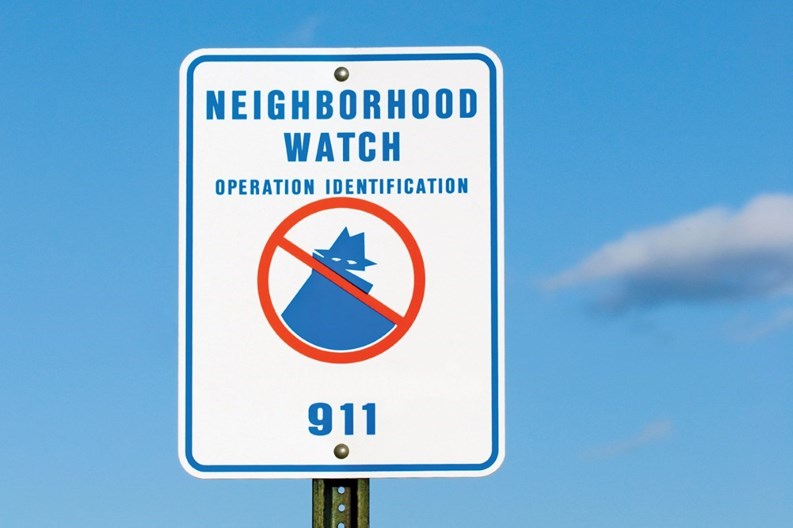 It’s often said that safety starts at home—and while many HOAs spend lots of money on sophisticated security and access  control systems to protect residents and property, others opt for lower-tech  solutions to neighborhood security and crime prevention. One such solution is  the neighborhood watch organization: a group of concerned residents coming  together to make a commitment to be vigilant and observant and to do what they  can in their own community to prevent crimes like vandalism, burglary, and even  arson.

“The whole idea is that in this economy our cities can’t afford to keep adding more police to the force,” says Al Cacciottolo, president of the Garfield Ridge Neighborhood Watch. “Our police are great, but they can’t be everywhere, so that’s why we want to get more and more people involved.”

“This is our second full year with 72 members that are made up of community  residents,” continues Cacciottolo. “We ride in patrols, not every day, but regularly: daytime, nighttime, weekday,  and weekend. We look for any city services that might be needed such as  overgrown brush, lights out, potholes, and then we post them with the  appropriate agency to get these services rectified.”

“The times that we patrol will vary because we found that a lot of burglaries  were happening during the day, so we have asked people who don’t work during the day to take on those shifts,” says Cacciottolo. “At night, we ask for 2-3 hours…anywhere from 7:30-11 p.m. or something like that. We patrol the neighborhood parks, the alleys, the schoolyards and other places  like that.”

The neighborhood watch groups can be very effective, according to the statistics  in Garfield Ridge. For example, graffiti and burglaries are down to an all-time  low.

Neighborhood watch groups are essentially the eyes and ears of local law  enforcement, says John Bedilio, a spokesperson for the National Neighborhood  Watch Institute, which is headquartered in California. “They are there to report, not to act. There have been times when a volunteer on patrol has crossed the line. In those  instances it can be necessary to engage law enforcement to protect someone’s privacy,” continues Bedilio, “although unless someone is actually breaking the law, it can be hard to curb  someone’s zeal.”

Over-zealousness is very seldom a problem, however. “We have bylaws and rules and regulations,” explains Cacciottolo. “We do not get involved, we just notify the police department.”

The actual formation of a neighborhood watch group shouldn’t cost anything, says Bedilio. “The out-of-pocket costs come in when the group would like to publicize itself.  If you want placards to post in the neighborhood, as a deterrent, or if you  want fliers or other materials to raise awareness, those costs will have to  come from the watch group itself.”

“We did invest a little bit of money to incorporate as a not-for-profit  organization,” says Cacciottolo. “We had some papers put together to go out in the area, and we had some placards  made to help get the word out.”

It also shouldn’t become an expense that a volunteer has to bear on a regular basis, if you  follow the Garfield Ridge model. “We take donations from local businesses or patrons so that we can give out $10  gas cards to those that are patrolling. That way they don’t incur any personal expense for helping out in this way. There’s no burden on anyone to come out and do this.”

The kinds of things that are just a little out of the ordinary vs. situations  that are worth reporting may not be clear to everyone. A typical scenario may go something like this, according to Cacciottolo, “We will be going through an alley and find a garage door open at 10 p.m., for  example. So we will go and ring the doorbell and ask the owner or resident if  they are aware that the door is open and susceptible to intruders. Often the  person isn’t aware that the door is open and is grateful to have the notice from us. We  have probably found 40 doors open.”

Watch groups can also be a great asset to law enforcement in apprehending crimes  in progress, Cacciottolo says. “There was an instance on a Friday night where two people were patrolling and  they happened to see a robbery in progress. They called 911 and the police arrived as the car was speeding away. Our group was able to get the license number and car description and the  offenders were apprehended.”

The network of eyes and ears can also be a valuable asset after-the-fact, says  Cacciottolo. “There was a house that was burglarized and the owner had cameras. He sent us pictures of the people who broke into his house and we put that out  in an email blast and a week later a woman saw someone who looked like one of  the offenders. We turned it over to the police and it turned out that he was one of the  robbers. He and his two accomplices were arrested and it was due to the efforts of our  neighborhood watch.”

One point that all sources seem to agree on is the necessity of the emergency  phone call when something suspicious occurs. “Call 911 any time,” says Cacciottolo. “We had a woman call 911 on a suspicious character entering a house. She waited until the police showed up and it turned out that the person was a  caregiver. When she apologized for creating a scene, the police told her no,  that was the right response. He might not have been a caregiver but someone who  might have burglarized the house.”

One of the challenges facing many watch groups is the consistency and dedication  of the volunteers. In larger municipalities where the watch group is formed all on its own, there  will be variation in the attendance and participation. When there are a rash of crimes in an area, people start paying attention, but  when things calm down again, dedication can wane. One benefit to being in a homeowner’s association is that the structure of meetings is already set up, making it  easier to add the watch group as a component, instead of expecting it to  survive all on it’s own.

Multifamily organizations may also consider using other security measures, such  as a security force or electronic surveillance. They are all effective,  depending on the circumstances,” says Donald J. Decker of Robson Forensic Inc. in Cedar Knolls, New Jersey. “It depends upon the location, but all three can be effective security measures.  Having a recording of what a person is wearing can be more reliable than what  someone remembers, but recordings can’t call in a robbery in progress…. and security personnel can be expensive, especially for larger forces.”

Cacciottolo agrees, “A security guard costs a lot more money, and more electronic surveillance is  helpful but it is expensive.”

One added benefit in volunteering for the neighborhood watch group in your area  is the opportunity to exercise while performing a community service. “We started in cars, but we found that that many people wanted to walk and there  were some who wanted to bike, so now we jog, walk dogs, ride bikes, and drive  in cars,” says Cacciottolo.

Another very important benefit to the neighborhood watch program is that it  really goes a long way towards fostering a sense of community, says Bedilio. “These networks that are created keep people in touch with each other, and it  keeps people interested in what others are doing. In an increasingly private and isolated society, this is one program that asks  people to reach out to each other, to keep up with each other, and to be  concerned with what is going on around each other.”

Denton Tarver is a freelance writer and a frequent contributor to The  Chicagoland Cooperator.