Do not show again [X]
By Bernadette Marciniak   2011 August Insurance 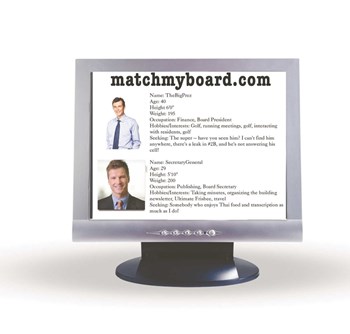 You may not know the name of your local alderman, or even your state  representative—plenty of polls have shown that many people don't. Politicians are one thing,  but when it comes to the people running your condo building or homeowners  association, ignorance is most definitely not blissful. Condo and HOA residents  often aren’t entirely clear on the roles and responsibilities of their various board  members, and even board members themselves may not always know exactly what  their roles entail.

The fact remains that the way boards are structured differs from building to  building and HOA to HOA. What may be the role of one board member in one  building may not be the same in another. However, having a general idea of what  the function of each role is can make running things a lot smoother and more  peaceful for all involved.

Gina Rossi, the marketing director for of Schaumburg-based Vanguard Community  Management, says that many times the number of positions necessary to  effectively manage a community association will be outlined in the condo or  co-op’s bylaws.

According to Paul Houillon, founder and president of Connected Property  Management, LLC in Chicago, each building is different in how they set up their  governing bodies. Usually, Houillon says, there must be a minimum of three  board members, and the number can increase based on the size of the building or  HOA and interested parties. Unless a building doesn’t have a management company, the specific titles of the individual board members  don’t matter much. “Board members are there to make decisions and vote,” he says. “[Their specific title] makes no difference when it comes to voting. It doesn’t matter to them who’s who.”

However, the titles do still exist and their functions, prominent or not, can  still help to define and clarify each board member's duties and  responsibilities to the community at large.

Buildings and associations usually have at least a president, treasurer and a  secretary, Houillon says. This can expand to having a vice president or “at-large” members, which are just members who are on hand and ready to cast a vote in  case someone can’t make a meeting or needs to recuse him- or herself from voting because of  conflicting interests or other reasons.

Dan Joyce, a property manager for Breakaway Management in Evanston says that the  president has a pretty loose role. He or she usually oversees the other  positions, leads and conducts the meetings, is in charge of communicating  between the board and the residents and is the contact for potential unit  buyers.

Flanagan says the president’s role is one of primary leadership. According to him, the president is the  point person that the property manager works with, discusses things with and  acquires reports from. Additionally, the president is responsible for creating  reports when needed, and signing proposals and contracts on behalf of the  association.

He agrees with Houillon that the president doesn’t necessarily have any more absolute authority than any other member of the  board but is the person responsible for casting a vision for the association. “The president should be vision oriented, thinking ahead, being aware and leading  the association in the right direction,” he says.

“The president is charged with creating an effective organization by getting a  group of people to work cohesively together towards common goals,” Rossi adds. “They are the chief executive officers of the association.”

Flanagan says that the president is also responsible for overseeing any old  business that may still be floating around, and that they should make sure  communication runs smoothly. “The president needs to set the expectation that all the committees and board  members provide information to make decisions,” he says. “If expectations are met there can be a brief, well-informed discussion on  matters.”

Board secretaries, according to Houillon, are responsible for taking the minutes  for each meeting and distributing them to all parties necessary afterwards. The  notes consist of who is in attendance at each meeting, anything important that  was discussed and any decisions that were made or voted upon.

Additionally, the secretary may be asked to serve as a witness when other  members sign legal documents like resolutions, for example, says Rossi.

Houillon says that as there isn’t any particular template of how minutes should look like or include, not  everything is recorded in the minutes for it would be extremely tedious and  unnecessary. However, everything that is recorded is kept on file for about  seven to ten years, as per the Illinois Condominium Property Act (ICPA).

Flanagan agrees, saying that the secretary doesn’t record everything that was said during a meeting, item by item, but that it’s a record of any important decisions that were made. “The notes should reflect actions the board has taken,” he says. “They should not be verbose.”

Treasurers seemingly have the most intricate job out of the three, as they are  responsible for all the financial documents and bookkeeping, continues  Houillon.

“They honestly carry the bulk of the work,” he says. “They’re going to the banks, receiving bills,” and so forth. However, he specifies that the bills the treasurer is responsible  for are utility bills such as water and gas, employee payroll—not the rent.

Flanagan agrees, saying that the treasurer is responsible for all the financial  records, producing financial and accounts payable reports, balancing sheeting.  Additionally, the treasurer’s job is to work with the property manager when there are questions about  expenses, such as coding for projects and expenditures on the documents.

“The treasurer can be considered the chief financial officer of the community,” adds Rossi. “[They are responsible for] signing checks when necessary, working with the  auditor, chairing the budget committee and providing the board of directors  with an accurate reporting of the association’s financial standing.”

Flanagan points out that although board members don’t need prior experience or prerequisites for the positions they end up with, a  treasurer does need to have a knack for finances. “Even if [the treasurer] is not a CPA (certified public accountant), he [or she]  needs to have financially-inquisitive ability,” he says.

Rossi agrees, adding that the treasurer should be familiar with financial  responsibilities such as collecting assessments, invoice payment and reserves.  Joyce notes that the treasurer also monitors income and is in charge of most  hands-on projects. “Everything costs money,” he says.

While the general consensus is that the treasurer’s job is the most intricate, Rossi emphasizes that no treasurer or any board  member should solely decide on financial matters affecting the community.

In addition to the three main board positions, there can be others added on an  as-needed basis. Additionally, committees are also formed to address specific  issues for a condo or co-op. These can range from zoning to membership to landscaping to green committees  that try to find environmentally-friendly initiatives to bring to an  association.

“The committee’s job is to bring well-formed plans and discussions to the board so that the  board can make decisions,” says Flanagan.

Rossi says that additional directors may be elected by the membership or chosen  in any other manner described in the association’s bylaws. She adds that the articles of incorporation or bylaws may also provide  for the majority of directors to create one or more committees and appoint  directors or such other persons as the board designates.

Rossi says that while there is no statutory demand for a vice president, many  communities utilize the position and have bylaws that provide for one. “The vice president typically substitutes for any presidential absence. The board  of directors must define this role,” she says, citing the example of overseeing committees as one potential  responsibility of a vice president.

The positions and their functions generally remain the same between condos and  co-ops—there really is no difference, according to Joyce.

“Condos and co-ops both have a board of directors, and each entity serves a  similar purpose of making decisions on behalf of the owners and shareholders,  respectively,” adds Rossi. For tax purposes, she says both are generally filed as a non-profit  corporation.

Rossi says that the individual positions vary in the service that each member  will provide to the community based on how the community defines the roles.

How To Become a Board Member

According to the ICPA, a term for a board member cannot exceed two years, but a  person can succeed themselves as many times as they continue to get voted in.

“Some boards don’t hold their annual election meeting because the management company is confused  on how it’s supposed to work,” he says.

Another reason that the elections may not happen could be lack of interest. “Finding enough members to be on the board can be difficult,” he says.

Specific updates need to be sent out to each unit owner before the annual  election meeting, with a lead time of no less than ten days but no more than  30, he continues.

For most part, Houillon says, two board members would be eligible for election  and the three residents with the most votes are brought in. However, unit  owners who elect their board members do not vote for specific positions.

“Board members will determine who does what (i.e. president, secretary,  treasurer) at their first meeting,” he says.

Some condos and co-ops, according to Joyce, form committees to help the board  out with running things and suggesting solutions.

“They become mini-experts,” Joyce says of the members of the committees. “It gets the unit owners more involved, even if they have no voting rights.”

According to Houillon, the master set of laws that all condo and co-op  communities abide by is set forth under the ICPA. Cooperatives may also be  governed under provisions of the state business corporation law. After that,  each association will have its own rules which can’t contradict the act in any way, shape or form.

Owners of units should receive these bylaws when they first move in, but if they  don’t they can always go to the board and request a set.

If by chance the board doesn’t have them (which Houillon says they should) owners can go to the Cook County  Recorder of Deeds office where master records of all these files are kept. This  could end up costing a few bucks though.

At the end of the day, board members are volunteer residents just like everyone  else who are simply there to help the process of maintaining peace in a  community.

“Most boards are very cooperative and nobody is the boss,” concludes Joyce. The key is to keep open communication about the roles and make sure that  everybody knows their responsibilities.

Bernadette Marciniak is a freelance writer and a frequent contributor to The  Chicagoland Cooperator.