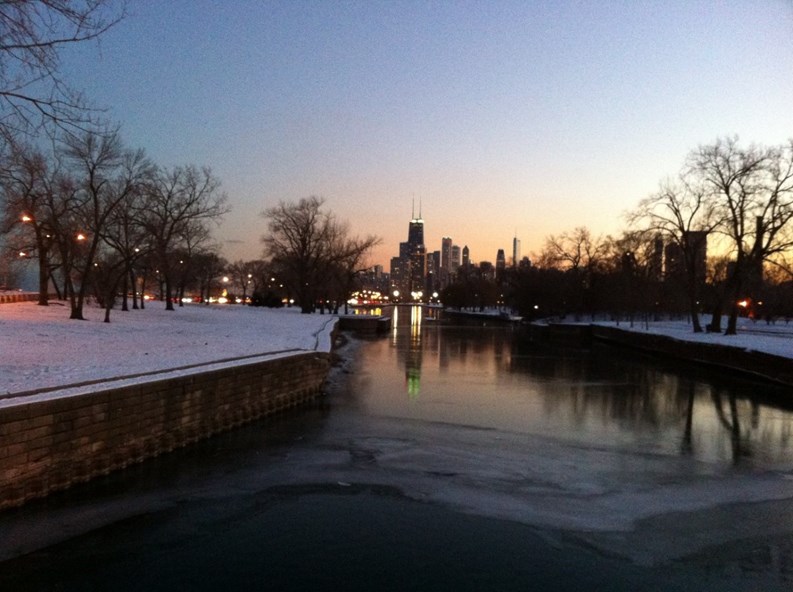 Two miles north of downtown Chicago you find one of the Windy City’s quintessential neighborhoods, Lincoln Park. Lincoln Park is located along the  lakefront and comprises the area north of North Avenue, south of Diversey  Parkway, west of the Lake Michigan and east of the Kennedy Expressway.

Beginnings as a Remote Outpost

The area now known as Lincoln Park in Chicago was primarily forest with  stretches of grassland and occasional quicksand until the late 1820s when the  Europeans arrived.

In 1836, land from North to Fullerton and from the lake to Halsted was  relatively inexpensive, costing approximately $150 per acre (according to 1836  prices not adjusted for inflation). Because the area was considered remote, a  small pox hospital and the city cemetery were located in Lincoln Park until the  1860s. Chicago became incorporated as a city in 1837, and North Avenue (to the  south of today's Lincoln Park neighborhood) was established as its northern  boundary. Settlements along the Green Bay Trail grew in number when the Green  Bay Road was widened and the government offered land claims to interested  speculators and investors. The area north of Chicago, including today's Lincoln  Park, was eventually incorporated as Lake View Township, which was subsequently  annexed to the city of Chicago in 1889.

In the period following the Civil War, the area around St. Josaphat's parish  around Southport and Clybourn was home to Chicago's Kashubian community, who  although Polish in national orientation, possess their own distinct culture and  language marked by the distinct influences of their maritime way of life as  well as their German neighbors.

In the 1950s, 1960s and 1970s, Lincoln Park was also home to the first Puerto  Rican immigrants to Chicago. Jose (Cha-Cha) Jimenez transformed the local Young  Lords gang into human rights activists for Latinos and the poor. They mounted  sit-ins and takeovers of institutions and churches at Grant Hospital, Armitage  Ave. Methodist Church, and McCormick Theological Seminary. The violent  confrontation between police and demonstrators during the 1968 Democratic  National Convention took place in Lincoln Park and on the streets of Chicago.

Today, a very small number of Puerto Ricans reside in Lincoln Park. The  neighborhood population is primarily made up of young urban professionals,  recent college graduates, and young families.

A Nice Place to Live

Encompassing many neighborhoods, the area also includes most of the Clybourn  Corridor retail district, which continues into the Near North Side. Lincoln  Park is home to Lincoln Park High School, Francis W. Parker School, and DePaul  University. Many students who attend these schools now live in this  neighborhood. Lincoln Park is also home to four architecturally significant  churches: St. Vincent de Paul Parish, St. Clement Church, St. Josaphat's (one  of the many so-called 'Polish Cathedrals' in Chicago), and St. Michael's Church  in the Old Town Triangle area of Lincoln Park. Visible from throughout the  neighborhood, these monumental edifices tower over the neighborhood, lending  the area much of its charm. The neighborhood also houses Children's Memorial  Hospital and the currently closed Lincoln Park Hospital, which is slated for  redevelopment to condominiums, medical offices, retail and commercial to be  renamed Webster Square.

While the average single family house is priced around $1 million dollars, many  homes in Lincoln Park sell for more than $10 million, making it one of the  wealthiest and most expensive communities in the city. In 2007, Forbes magazine  named the area between Armitage Avenue, Willow Street, Burling Street, and  Orchard Street as the most expensive block in Chicago.

The median list price for homes in the Lincoln Park/DePaul neighborhood is  $381,000 and most condos were selling as recently as December 2010 for an  average of around $401,000, according to real estate site, Redfin.com.  According to Trulia.com, the average listing price in the area was $792,984 but  that includes all types of property and is not limited to multifamily co-ops  and condos. For example, Sotheby’s has listed a one-bedroom, 700-square-foot condominium apartment on North  LaSalle Drive for $229,999. While some home prices have dipped due to the  economy, there are still bargains to be had in the Lincoln Park neighborhood  for savvy buyers.

The neighborhood is very welcoming and contains large number of upscale national  retailers, boutiques, bookstores, restaurants and coffee shops. An Apple Store  opened in October 2010, as well as a Lacoste store on North Michigan Avenue.  There are also many bars and clubs in the area, especially along Lincoln Avenue  between Wrightwood and Webster.

In addition to the zoo and the park, other attractions are the Lincoln Park  Conservatory, the Chicago History Museum, the Peggy Notebaert Nature Museum and  the North Avenue Beach. From May through October, the Lincoln Park Farmers  Market and Chicago’s Green City Market offer the freshest seasonal produce around. The Lincoln Park  neighborhood is accessible via mass transit, including the CTA's Red, Brown and  Purple lines at the Fullerton station, the Purple and Brown lines at the  Armitage and Diversey stations, as well as CTA bus service.

Lincoln Park residents are served by Chicago Public Schools, which includes a  number of neighborhood and city-wide options for students. Nationally, Lincoln  Park High School is ranked as the 90th best high school in the country by the  U.S. News and World Report.

You can’t go wrong for considering living in Lincoln Park based on its fine reputation  as a premier cultural, retail, dining and social entertainment destination.