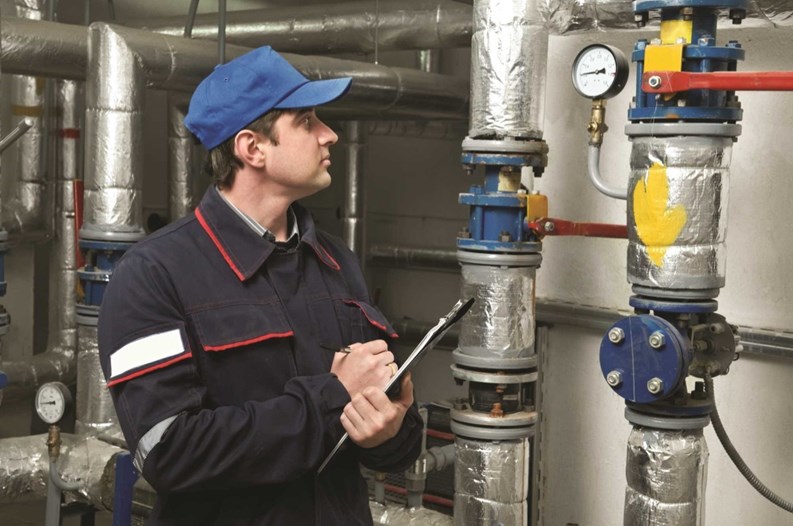 In many ways, a building’s boiler is like the heart is to the body: it provides heat and circulation; it  works unseen; and if it is not functioning, it won’t take long for life to go away. Maintaining this heat source of the community  is as essential as it is for a person with a heart problem to avoid the  conditions that lead to a heart attack. And when the weather gets colder and a  building’s boiler is exercised vigorously, it is crucial for the machine to be in top  shape. Failing to keep the boiler “healthy,” so to speak, so could lead to one of the worst building emergencies—a no-heat attack.

Keeping the boiler system operational is a combination of off-season maintenance  and routine checkups that must be performed correctly, or unnecessary problems  will plague a boiler and shorten its life span. So boiler service companies,  chief engineers and superintendents, or other building employees charged with  checking on the boiler, must be trained professionals who fully understand the  tasks they perform. Making an incorrect fix on a boiler or failing to fix a  boiler which needs repair isn’t always just a matter of slightly lowering the efficiency of the system through  inaction. It could be a question of needlessly costing a building’s residents more money than they’d care to consider, and more than they need to spend.

You needn’t be a boilermaker or a building’s chief engineer or super to understand how a boiler works because the machinery  is actually fairly simple. It’s practically as simple as making tea.

“A boiler is a teapot, that’s all it is,” says Scott Golz, a manager for Spannuth Boiler, in Oak Park. “The biggest problem you have with a boiler is [fresh] water—if your system has a leak. That water has to be replaced and that adds oxygen,  which speeds up the corrosion process.”

Like any equipment, boilers sometimes will have problems. But regular  maintenance can prevent many of those problems such as excessive residue  buildup. To prevent excessive residue accumulating in the boiler, a building’s chief engineer or superintendent can open the boiler’s blow-down valve for a few seconds each day, which cleans out the residue. A  boiler’s motors also should be cleaned and lubricated once a month and the unit should  be checked regularly for leaks. A building’s chief engineer or the superintendent can find leaks in the boiler by walking  around it and inspecting it.

“If you’re constantly feeding water into it, you know the water’s going somewhere,” Golz says. Some buildings have a water meter on the boiler piping to monitor  the amount of water being used by the system, adds Golz.

Given proper maintenance, a boiler can last 30 years or more. Because this  equipment uses water, which contains many corrosive agents and which itself  also is corrosive to the apparatus, boilers must be regularly scrutinized for  potential malfunctions. The chief engineer or superintendent and the boiler  servicing company should work together to keep a close eye on all the system’s parts, including the radiators in the apartments. One way this can be done is  through training provided by a boiler servicing company to the super or any  other employees who oversees the boiler’s operation. Many boiler service companies will provide this training when they  install a new boiler, or when a new chief engineer or super is hired by the  building.

Annual maintenance work on a building’s boiler should happen sometime from June through September. Getting this job  done isn’t just about preparing for the cold months; it is also about saving money. If a  boiler is at the end of its useful life, it might need to be replaced before  winter. Waiting to do so could be foolish, and quite expensive.

“Don’t wait until it’s cold,” Golz says. “If you need a new boiler, you’ll get the worst price for one in October.”

Boilers need the attention of watchful eyes, meaning any small malfunctions in  the system cannot be overlooked even for a little while. A few pinhole leaks in  your radiators in some of the apartments could end up being many very tiny  leaks that together waste residents’ maintenance fee dollars.

“Twenty little leaks at your radiators look innocent but it adds up to one big  leak,” says Scott Fewer, owner of Fewer Boiler Inc., in Chicago. “A lot of buildings have pipes in the floor, and you can’t see the leaks. We have had buildings that were losing 10,000 gallons of water  a month, and never knew.”

Boilers should be regularly treated chemically, to neutralize any corrosive  agents that are coming into the system. The boiler’s water should be tested and chemically treated at least six times per year,  depending upon the type of boiler. These chemical treatments neutralize the  oxygen content in the system, which is important because oxygen is a corrosive  agent that harms a boiler. Excess oxygen in the system will result in a faster  corrosion of the device. While the frequency of these chemical treatments is  partly dependent upon the type of boiler, the need for the treatments depends  also upon how regularly the boiler is used. The more a boiler is operated, the  more chemical treatments it will require.

In addition to daily or weekly flushing out of the system via the boiler’s lower cutoff valve (depending upon the aforementioned factors), a building’s chief engineer or superintendent also should clean an oil-burning system’s oil strainer once a week. If this task is not done regularly, dirt will  eventually clog the strainer and shut down the system. Maintenance staff also  should visually inspect the boiler at least once a week though some industry  pros recommend checking it daily.

When regularly checking the boiler, the chief engineer or the super should  inspect the bolts on the pump, check the water level and always check for oil  leaks or water leaks. The building’s chief engineer or super must be intimately familiar with the boiler, noticing  any change in it. That could involve keeping his nose in the air, smelling  around for possible leaks of flue gas from the chimney. If those gases are easy  to smell, the chimney might be partly or completely blocked, and the situation  could be dangerous—even fatal—to residents in the apartments above.

Another way for the chief engineer or the super to monitor the efficiency of the  system is to check the thermometer on the smokestack. The temperature on the  thermometer should never exceed 550 degrees. The higher the stack temperature,  the more soot there is in the boiler, which leads to lower efficiency. Major  fixes on a boiler should always be left to boiler servicing company  professionals.

During its annual servicing, the boiler’s oil burner should be overhauled. This involves a professional boiler servicing  company’s employees breaking down the oil burner and checking all of its operating parts  and replacing worn parts that are likely to fail, before they become a problem.  During its annual maintenance checkup, a boiler’s efficiency should be tested as well.

With winters as raw as they’ve been in recent years, the importance of not waking up in a cold apartment  needn’t be explained to any apartment dweller. A pre-winter maintenance visit by a  professional will ensure this won’t happen.

Pre-winter maintenance should start with a thorough brushing out, vacuuming and  cleaning of the boiler. The smoke pipe and chimney should be cleaned at the  time, and the device should be inspected for signs of leaks. Leaks should be  repaired and worn parts replaced during any boiler overhaul. Finally, the  burner should be fired up and tested to verify that it’s working properly.

Some certified boiler contractors caution that a building’s bottom line shouldn’t be the main factor in a board’s decision to repair or replace a boiler. Choosing the right people to do the  work is the first step. Before hiring a company for major boiler work, a  building’s residents should make sure the contractor really understands the job, Fewer  says.

The average annual maintenance visit for a boiler lasts about five hours. Annual  servicing should be done before the cold weather comes, sometime from January 1  to early October at the latest. This annual tune-up should be done by a  licensed boiler installer or plumber.

Most chief engineers or supers may not be qualified to do this work, nor are  they qualified to do annual inspections of the boiler unless they are  certified. The city of Chicago offers boiler license prep classes through Local  399, the International Union of Operating Engineers, at various times  throughout the year. A series of classes are scheduled for October 3-7, 2011,  at the union training facility on South Grove Street. SEIU Local 1 also  conducts boiler training for chief engineers and supers at its West Loop  training center. Chief engineers need 6 hours of continuing education training  annually; assistant engineers, 8 hours. A nine-week course on low pressure  boiler systems begins October 5, 6 or 17th and other maintenance education  courses are offered as well.

Tim Craddock, a boiler foreman for Chicago Boiler Repair, stressed the need for  the building’s management team to pick the right contractors to work on a boiler. “You really should have a specialist for work on high-pressure boilers,” Craddock says. Steam boilers, especially, can be tricky to deal with for those  who aren’t very knowledgeable regarding their care, he says.

Jonathan Barnes is a freelance writer and a frequent contributor to The  Chicagoland Cooperator.