Do not show again [X]
By George Leposky   2011 December Security 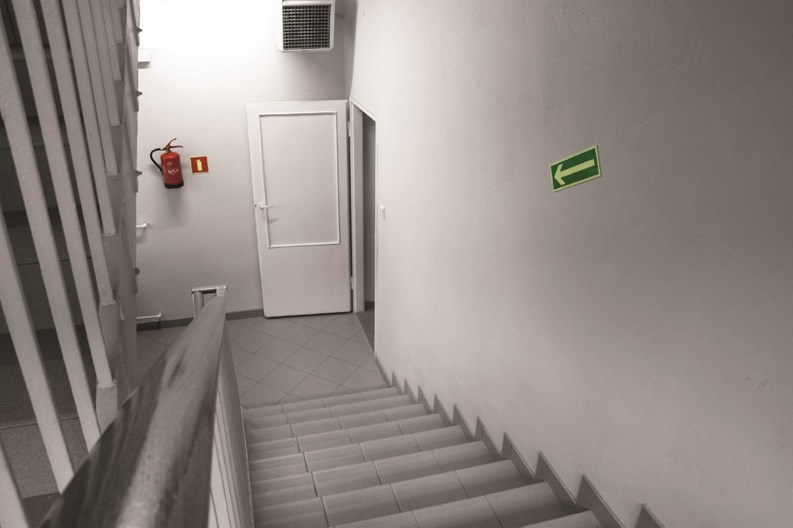 At 7 p.m. on a Friday evening, Keith J. Hales, president of Hales Property Management, Inc., happened to be checking his email. He found a message from a woman who lives in a four-story condominium building his company manages on Chicago’s north side.

“She wrote that she smelled smoke in the hallway and was leaving, and could we check this out,” Hales says. “She didn’t think to call 911, or our company’s emergency number. Instead, she sent an email outside of normal office hours when no one might see it.”

Hales called 911 to summon firemen then rushed to the building. There he learned that a cigarette butt had been tossed into a planter on the common deck that occupies part of the 19-unit building’s top floor. This happened in autumn, so the vegetation in the planter was dry and brittle. It caught fire, melting the siding material in an adjacent wall. Then the fire began to travel through the siding into the building.

After the fire, the condominium association’s board of directors changed the rules to prohibit smoking on the common deck.

Also, Hales learned that the person who tossed the cigarette that started the fire lives in an apartment with his brother, who is confined to a wheelchair. “The apartment has elevator access but in a fire the elevator gets shut down right away,” he says, “so the board should go looking for special-needs residents.”

Hales concedes that this building’s occupants weren’t well educated on how to report emergencies. “The board needed to hammer home that if any emergency happens, first call 911, then look on a list of whom to call next,” he says.

Compiling such a list and constructing a detailed action plan for various kinds of emergencies is a building-specific task, Hales says, because every building has different vulnerabilities. For example:

Chicago allowed developers to convert the basement storage area in older three-story buildings into “garden” apartments. “Those basement areas are prone to water infiltration,” Hales says. Heavy rainstorms in the summer of 2011 exacerbated the problem. Such infiltration occurs in buildings along the Chicago River, and in other parts of the city where the sewer system can’t accommodate demand and backs up. “Flood-control systems could be installed in buildings, but they are pricey. Boards may defer that expense and then have another heavy rainstorm,” Hales says.

The top floors of many newer buildings are vulnerable to seepage from wind-driven rain. “The materials are not as good as they used to make them,” Hales says. “Large split-faced concrete blocks soak in water like a sponge. Water seeps in through the walls, windows, rooftop, and parapet.”

Garages need to be cleaned at least once a year, Hales says, but “there might not be enough money in the budget. Meanwhile, a car might be leaking oil. That’s a risk factor that could start a fire.”

Buildings undergoing renovation may have hazardous materials and chemicals on hand that would make a fire or other disaster worse.

The responsibility for creating an emergency plan for a condominium or homeowners’ association rests with the board or a committee appointed by the board, says Sheila Malchiodi, development and marketing specialist for Elgin-based QCI Restoration, Inc. Her company secures properties after a fire or other emergency by providing board-up, fencing, tarping, and structure stabilization.

Malchiodi helps association boards and property managers develop emergency plans in an effort to avoid emergencies, and to minimize the impact of those that do occur.

“The first step is to follow whatever guidelines, if any, were set in the condominium declarations and bylaws,” she says. “Then we discuss what’s in place currently. There’s no need to reinvent the wheel and start from scratch. From there, it’s about filling in the gaps to create a comprehensive plan.

“I stress to the board that safety is the number one concern. If you have an emergency evacuation route in place, is it clear, is it concise, is it shared with all the residents, or does it need work? Then do that kind of analysis with each component of the plan.”

Malchiodi says the types of emergencies possible in Chicagoland run the gamut. Extremely cold winter temperatures cause frozen pipes to burst, while residents increase the fire risk by using ovens, stoves, and hazardous space heaters to stay warm. Summer storms such as those that swept through the city this past July cause flooding and power outages. “In suburban areas you have more damage from river overflow, wind, hail, downed trees, and lightning,” she says.

What about less common kinds of emergencies, such as earthquakes (which Chicago recently experienced) or bio-terrorism? “No crisis or emergency should be considered a low priority,” Malchiodi says. “Murphy’s Law applies. If you don’t focus on that one thing, it will happen. If you can envision it, you ought to prepare for it.”

Although the association board and management may write the emergency plan, resident input and buy-in are key to its success, Hales says. He recommends including it on the agenda at annual association meetings, and holding special meetings to discuss it prior to approval and to update it in subsequent years.

“In a condominium, most first-time buyers come from rental properties,” he says. “They go to the landlord and say do this or that for me. In a condo, you have some shared responsibility for what goes on in your unit, and in the entire community. Nobody owns the entire building. The association owns the common areas and the individual residents own just their portion of it. When someone says ‘You didn’t do this for me,’ he is partially to blame. That’s a difficult topic to educate people about. My response is ‘You’re the owner. What do you want to do? Get involved.’ ”

“In the melting pot of the Midwest, there may be numerous languages in a community,” Malchiodi says. She advises that the board require new residents entering a community to fill out a simple spoken-language preference form that can be shared with first responders in an emergency. Existing residents also should be encouraged to complete the form.

“Send it with the annual budget, because people always look at the budget,” she suggests. “Make a game out of it, or offer a reward. Also, there is less resistance to provide the information when management takes the time to have a personal relationship with its residents and an open dialogue of communication, so the residents feel they are part of a community.”

Hales’ company manages 41 associations with a total of 600 units and says all of his residents can communicate in English. If confronted with the language problem, he would ask residents who have problems with English to provide contact information for a translator who could be called to help in an emergency.

For communicating emergency information in advance, Hales suggests using a Google application that converts emails into Spanish, Polish, or whatever language is required; or a text-messaging service that converts English text automatically into another language.

Hales’ company has a website with a separate page for each association. If necessary, he could translate the emergency plan into another language and post it online.

A wealth of resources exists to help an association board write an emergency plan, including their own property manager and management firm, and outside consultants such as Malchiodi. In buildings where maintenance of elevators and other mechanical equipment, security, and other services are contracted out, those vendors should participate in the plan deliberations. Input from local police and fire officials also should be sought.

In addition, boards and managers can consult and adapt the guidelines and checklists at various online sites (see sidebar).

In 2001, the city of Chicago adopted Chapter 13-78 of the Municipal Code, which requires tall buildings that rise more than 80 feet above grade to write an emergency plan. Section 13-78-080 lists the plan’s minimum requirements:

• Evacuation procedures and who is responsible for carrying them out.

• Setting up a fire command station.

• Posting the plan in the building office, at its security desk, and near the fireman’s elevator recall key or life safety panel, or in the fire pump room.

• Listing the name and floor location of special-needs residents who require assistance to evacuate in an emergency. (In practice, this has evolved into the placement of a sealed envelope inside the plan binder containing individual slips of paper, each bearing the name and unit number of a special-needs resident so an individual first responder entering the building can take a slip and go rescue a specific resident.)

The law also provides fines of $500 to $10,000 per day for owners, tenants, or other responsible parties who lack a suitable emergency plan.

Elsewhere, association boards and property managers should determine whether their own municipality or county has a similar law and, if so, use its provisions as a guide.

George Leposky is a freelance writer and editor living in Miami, Florida, and a frequent contributor to The Chicagoland Cooperator.