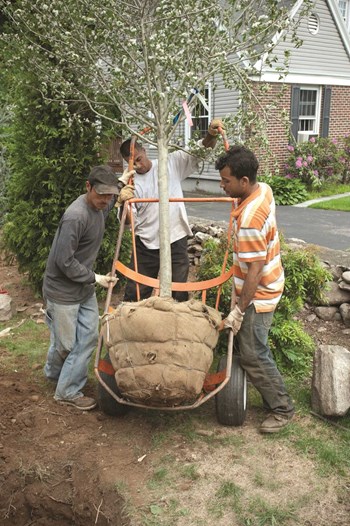 They are the greenery that gives life to our cities, the leafy giants that give us shade and that unforgettable rustling sound just outside our windows late at night. Trees are the unsung heroes of the urban landscape and with proper planning and care, they can add immeasurably to the livability and character of a co-op or condominium community.

The Right Spot for the Right Tree

In order for a tree to thrive, it needs to be the right tree in the right spot, and it needs to be cared for properly. “There are key aspects to consider when selecting a tree: planning space and location, light and wind exposure, soil, to name just a few,” says Heather Stevenson, a certified arborist with Lockport, Illinois-based Homer Tree Care, Inc. “Most important is making sure to choose a tree appropriate for our growing zone. We are considered a Zone 5 in Chicagoland.”

By zone, Stevenson refers to the U.S. Department of Agriculture's Plant Hardiness Zone Map, which identifies 12 distinct ecological zones (plus subzones) and the species of trees and plants that can be successfully grown there. According to www.USDA.gov, “The 2012 USDA Plant Hardiness Zone Map is the standard by which gardeners and growers can determine which plants are most likely to thrive at a location. The map is based on the average annual minimum winter temperature, divided into 10-degree F zones.”

Sometimes matching the zone to the specific tree is not enough because of the importance of soil in the ultimate health and well-being of a tree. “There are a lot of trees that are zoned for this area,” says Thomas A. Ginnow, district sales manager for the Lake Bluff office of The Care of Trees. “They can live here, but a lot of them struggle because of soil conditions. These are not native soils. They’re construction soils.” And those soils do not necessarily have the same nutrients and chemical makeup that soils in the countryside or even in a suburban backyard might have.

For trees that will be planted in the very heart of the city, Ginnow says considerations should be made for those unique characteristics of urban settings. “Trees have to be tolerant of city pollution,” he says. “And they have to be wind tolerant.” The height of buildings coupled with the sometimes narrow streets below can cause wind tunnels that trees have to be able to withstand.

Tom Tiddens, plant health care supervisor at the Chicago Botanic Garden, says, “There are many good tree choices for the Chicago area.” When it comes to choosing the right trees for the right locations, Tiddens suggests also taking into account over-head restrictions, distance from buildings or structures, other plantings in the area that could affect or be affected by the tree and, of course, overall design goals.

Those design goals can begin with questions as simple as, “What kind of trees do you like?” says Ginnow. Decision makers should consider whether they want shade trees, ornamental trees or flowering trees and what purposes they want them to serve.

Ginnow also touts the suitability of the honey locust, describing it as a “large, fast-growing tree with small leaves,” that does well in the city. The gingko, he says, “is an ancient tree with beautiful fall color.” He suggests, too, the freeman maple, “a cross between silver and red maple that’s fairly fast growing and can be planted close to buildings.”

When considering the purchase of new trees, the web can provide some helpful guidance. The City of Chicago offers an Urban Tree Planting List on its website while the Chicago Botanic Garden offers a Trees for 2050 list that outlines the types of trees that would continue to thrive under climate change warming.

Without a Well-Laid Plan…

Without proper planning and execution, the planting of trees in the wrong place or in the wrong conditions can lead to both short- and long-term problems. As manager of the downtown Chicago office, Ginnow says that 75 percent of the work his office was called out to perform “was because the wrong tree was planted in the wrong spot. Trees have individual needs. A birch tree, for example, needs 7 to 8 hours of direct sun every day. A crabapple planted in the shade will be more susceptible to leaf fungus. A beautiful oak can suffer from construction nearby.”

“Many issues arise when a tree plan has not been thought through,” says Stevenson. “As arborists, too often we see trees that prefer to be in low, wet areas planted in high, dry areas and vice versa. Also, over-planting or planting areas too densely is often an issue.”

In addition, proximity to structures is not considered in the long term. “It may not be an immediate problem,” says Stevenson, but “10 to 15 years later, the tree is growing into or against the structure causing issues. The most common issues we see are roots interfering with foundations and septic lines, along with limbs rubbing roofs and structures.”

Tiddens agrees. “It’s crucial to think forward 10 to 20 or more years,” he says. “For example, a silver maple tends to develop poor limb attachments and is a very messy tree. If planted too close to a home, it could pose damage from a large limb falling on the house. The tree also produces a carpet of seeds in the spring, and massive amounts of fall leaves. Honeydew is common under the tree (which means) everything gets sticky and may develop sooty mold.”

Creating a healthy and diverse environment for the trees and other plantings also can make a big difference in the success of the landscape. “A lack of diversity can make the landscaping susceptible to infestations such as we’ve experienced with the emerald ash borer or Dutch elm disease,” Tiddens says.

Poor planning also can result in the accidental planting of high-maintenance trees that require costly care to sustain as well as trees that fail to thrive because they are not suited to the climate or growing conditions, Tiddens says.

In the long term, Ginnow says, it pays to consult with an expert before planting.

If mistakes were made in the past and your trees are suffering or are creating problems because they were planted in the wrong spot or the long-term growth of the trees went unconsidered, there are options to fix those issues. Some, though, will require tough choices.

“If a tree is planted too close to a building structure or pavement, occasionally the trees can be moved if they are not too big,” says Stevenson. “Unfortunately, the majority of the time, the tree has to be removed because it is too big to re-plant.”

For trees that are struggling, “Ask a certified arborist to identify the problem,” says Ginnow. “Then you need to identify how important the tree is to the client. There can be sentimental value to a tree, like a pet almost.”

One solution can be to reduce stress to the tree and alleviate some of the external issues harming it. “The soil might have the wrong pH level, there might be too much shade, there could be an insect that’s chewing on the leaves,” Ginnow says. “In a lot of cases, we can extend the life of trees that are struggling but we can’t permanently fix them.”

For trees that have not yet outgrown their space but are headed in that direction, there are some potential fixes. “There are growth regulators that could slow the growth of the tree, but the treatments are expensive and need to be reapplied every two years,” says Tiddens. Managers and maintenance teams “could try pruning the tree on a stepped-up schedule.”

Sometimes, though, it is best simply to accept the inevitable. “It may prove best to remove the problem tree and not fight it,” says Tiddens. “Then plant the appropriate tree or shrub, or plant farther away.”

If a tree is healthy and growing well exactly where it should be, it is important to keep that good thing going strong by tending to the trees on a regular schedule and helping it fight off the kind of common afflictions that can injure a tree.

One risk that almost all trees face is that of pest infestation. “The Chicago metropolitan area hosts numerous insect and disease pests—virtually too many to list,” says Tiddens. “The best approach is to pick trees that are pest resistant, and these are often newer cultivars.”

For example, Tiddens says, “If you desire a birch tree, a river birch would be a good selection, since it's very resistant to bronze birch borer, a killer of birch in our area. Another example would be to select a crabapple that is resistant to apple scab—the number one disease of crabapples in our area. It’s also important to monitor trees routinely for pest problems and consider removing highly pest-prone trees that require routine treatments such as fungicides and/or insecticides.”

Proper irrigation is also a key in ensuring good arboreal health. “Established deciduous or leaf-bearing trees require approximately two to three inches of rainfall weekly during the growing season from March and April through August,” says Stevenson. “Established conifers or needle-bearing trees require approximately one to two inches of rainfall weekly during the growing season. We must keep in mind that if the rainfall is hard and fast moving, the trees may not be able to absorb the water. Slow, steady rainfalls are optimal.”

When nature fails to cooperate, “Soaker hoses are a very effective way of distributing water at a slow, even pace,” says Stevenson. If watering via an underground sprinkler system, she encourages maintenance to leave the water on longer in the tree’s zone as grass has shallow roots and can steal that initial moisture.

When it comes to trimming and pruning, trees should never be topped. Tree teams used to do it, “But it was found to be really bad for structure and solidity,” says Ginnow.

Pruning trees, though, “helps reduce dead wood and makes it less risky for objects or people standing under them,” says Ginnow. Thinning or removing live branches also can be a good idea, he says, so that the wind can go through the leaves rather than having the leaves and branches act like a sail and possibly break off.

With the right amount of planning and dedication to long-term health and well-being, trees are an indispensible and yes, gorgeous, addition to any urban landscape—and well worth all of the effort when colorful blooms emerge in the spring from their slumber.