Do not show again [X]
By Hannah Fons   2012 November Management 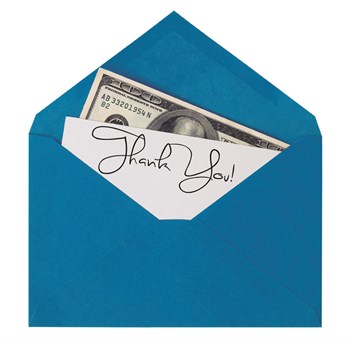 According to some sources, the word “tips” is actually an acronym—it's short for “To Insure Prompt Service,” and the list of people who are commonly tipped—at least in the United States—includes everyone from hair and nail salon workers to bellhops, cab drivers,  newspaper delivery people, porters, valets, bartenders, and, of course,  restaurant wait staff.

As multifamily housing became the norm in densely populated urban areas like  ours, apartment building staff joined the tip list. From the doorman who greets  you, signs for packages, and keeps an eye out for your safety to the super or  building engineer who doesn’t grumble (much) about being called to deal with a leaky steam-pipe at the crack  of dawn on a Sunday morning, building staff work hard 24/7 to make things  easier and more convenient for you as a resident. When the holidays roll  around, it’s simply good manners to show your staff a gracious gesture of thanks for a job  well done.

It’s not unreasonable to ask why we tip at all in the United States—plenty of other countries don’t do it, and after all, keeping the boiler running and helping residents out is  the building engineer’s job—he gets a salary already, right?

The origin of tipping is interesting, though perhaps not exactly gracious.  Though there is some disagreement, most historians agree that the practice  likely began during the heyday of the Roman Empire with rich, landowning Roman  citizens tossing a few coins to the peasants as a conspicuous gesture of wealth  and largesse. It has also been suggested that “tipping” was the term used by feudal lords in Medieval Europe to describe their practice  of throwing the occasional piece of gold to their serfs as they passed on  horseback; the noblemen felt that the gold appeased the rabble and assured them  safe passage through the crowd. (No word on how the serfs felt about it.)

Though noblemen and ladies no longer ride through the streets on horseback,  casually tossing doubloons to the ragged masses (they mostly use Lincoln town  cars these days, and thanks to the recession keep what doubloons they have left  in offshore accounts), the practice of tipping has stayed with us.

According to etiquette maven Emily Post, “[Holiday tipping] is a way to say ‘thank you’ to those who have provided service to you throughout the year—letting them know you’re pleased with what they have done for you.”

But who exactly should one tip in one's building, and how much? The answer  depends on a number of variables. According to Post’s website (www.emilypost.com), the main factors that help determine the gifts  you give your building staff are:

• How pleased you are with their service

• How frequently you call upon the person, or how long you’ve known them

• Your regional customs (tips are usually bigger in bigger cities)

• The type of building you live in

Of course, another major consideration in the last few years has been the bite  the ongoing economic crisis has taken out of many peoples' gift budgets. If  you've recently been laid off, or seen your investments dwindle to anemic  levels, the burden of seasonal tipping may take a lot of the cheer out of the  holidays.

It's important to keep in mind, though, that while tipping your building staff  and others is customary and polite, it's never mandatory—and nobody expects you to choose between paying your electric bill and tipping  the garbage man. According to Post, “You shouldn't feel obligated to go beyond your personal budget. If you already  tip regularly at the time of service, you may forgo an end-of-year tip, or give  a more modest holiday thank-you or a small gift instead.”

If you live in a small building with just one chief engineer or handyman, you  might also consider giving one gift or tip on behalf of the entire building. If  everybody chips in a certain amount, it eases some of the pressure on residents  while still expressing their thanks for the work the building employee has done  for them during the year. Also, notes Post, “Don’t buy into the thought that if you don’t tip you won’t get good service for the coming year. If you think you've had bad service for  this reason, you might want to consider changing companies” or employees.

Clearly, if you live in a windowless basement apartment in a crumbling building owned by an absentee landlord, the issue of tipping is hardly your first  priority. If your building is like most in the city, however, the following  chart should help you figure out who gets what. The various amounts quoted  below are averages of suggested figures published by Emily Post, the folks at Tipping.org, CNNMoney.com, and personal finance coach Jean Chatzky of SavvyMoney.com.

Apartment Building Superintendents and Chief Engineers: $25—$100.According to CNNMoney.com, “Tips to apartment staff are highly appreciated and apparently well-noted. It's  best to give cash in envelopes and to tip the entire staff. If you're not sure  of how many people are on staff, ask your [manager] for a list. Another helpful  rule of thumb for tipping building staff is to give the superintendent double  what you tip the doormen.”

Doormen: $25 and up. According to Tipping.org’s holiday tipping guidelines page, “Take into consideration how nice they are to you, if you get lots of visitors or  deliveries, and if they’ve actually opened the door for you always. To maintain this level of quality  service, you have to pay for it.”

Building Custodians: $15—$30. These people have a difficult, sometimes unpleasant job. If you accidentally  tracked paint or oil all over the lobby carpet, or your dog (or child)  committed a public indiscretion at any point during the year, you owe it to  your custodian to remember.

Handymen: $15—$30.This is an instance when the amount of your tip is directly proportionate to the  amount of work you’ve requested from your building handyman during the year. If you just greet each  other in the hall, the lower end of the range should suffice. If you’ve gotten him out of bed in the dead of night to fish your grandma's engagement  ring out of the trash chute … ask yourself how much such a task is worth to you, and show your appreciation  accordingly.

Garage Attendants: $10—$25. If you use your car at odd hours, or if the attendants in your building’s garage take special care of your vehicle or have it ready for you when you get there, an acknowledgment of their attention is in  order. You may tip each attendant individually, or earmark a half-month’s parking rate to be divided among the garage staff.

Garbage Collectors, Mail Carriers, and other Civil Servants: $10—$20. According to Tipping.org,if your building has a contract with a private waste management company, $10 to  $20 is the customary amount for holiday tips. Government agencies—including the U.S. Postal Service and the Department of Streets and Sanitation—prohibit their workers from receiving money as a gift or gratuity, but there's  no law against doing nice things for people at holiday time or any other time  of year. As long as the value of the gratuity or gift doesn't exceed $20 or so,  there should be no problem. Fresh baked goods or coffee shop gift cards are  never a bad idea, and a letter of appreciation to your carrier or sanitation  team's supervisor is another great way to let them know how much you appreciate  their work.

Other Folks to Consider

There is a host of other people you might also want to remember during the  holiday season—personal trainers, nannies, housekeepers, baby sitters, your stylist—and the range of what’s considered an appropriate for these professionals is wide, and left mostly to  personal judgment.

If you have a cleaning person who comes weekly to straighten up your apartment  and do domestic tasks, it's appropriate to gift them a week's pay or more,  according to Tipping.org. Personal trainers, hair stylists, massage therapists,  and any other personal-care pros you see regularly should get the equivalent of  one appointment fee. You need not tip your property manager or outside  contractors that work at your property.

Regardless of the cash value of your gift or whom you're giving it to, Chatzky  stresses the importance of “[making] sure that you present your tip as an actual present. Put it in a nice  card, write a personal note, and deliver it personally rather than, for  example, taping it to the garbage can. And cash is appreciated, rather than  checks.”

And that counts for non-cash gifts as well. Tough times are often the  inspiration for more creative gifting, says Post. “If your budget does not allow for tips, consider homemade gifts; if you're not  good with crafts or in the kitchen, remember that words are always a great way  to express your thanks for a year of good service.”

And that's good advice any time of year.

Hannah Fons is associate editor of The Chicagoland Cooperator.