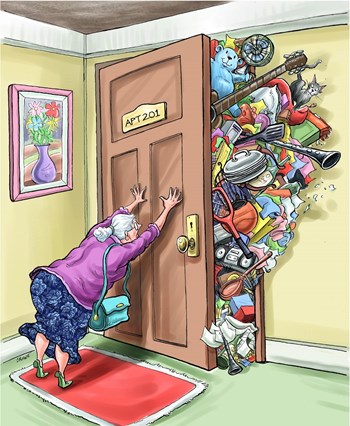 “Sue“ is a retired professional who is well-to-do, rarely eats at home and has lived  in her condo for decades. While everything seems perfect from the outside, Sue  is the keeper of a dirty little secret.

When the unit above hers suffers a plumbing leak and the property manager has to  gain access to Sue's unit to assess the scope of the problem, the manager not  only can't get into Sue's bathroom to look for leak damage, he can't even get  past her foyer. There are shopping bags, piles of clothing (some with the tags  still on them), collectibles, hundreds of plastic recyclables, stacks and  stacks of books, flea-market finds, and piles of newspapers dating back decades  blocking every doorway, climbing up the walls, leaning crazily against  half-buried furniture, and reducing hallways to narrow, dimly-lit footpaths  only a foot or so wide. Much to her mortification and her neighbors' shock,  Sue's secret is out: she is a hoarder.

According to the International Obsessive Compulsive Disorder (OCD) Foundation, a  hoarder is someone who obsessively acquires too many possessions and/or has  enormous difficulty discarding or getting rid of them when they are no longer  useful or needed. Of course, lots of people battle clutter, and lots of people  collect things – but when this behavior spirals out of control and threatens a person’s health or safety or leads to distress it becomes a ‘disorder.’

In Sue’s unit, the piles of shopping bags, newspapers, and other detritus blocked  exits, and the inaccessible bathroom made it impossible to repair the plumbing,  which in turn lead to mold problems. Sue's situation was so bad that had there  been an emergency, it would be impossible for first responders to get to Sue in  time to help her.

Unless—as in Sue's case—you’re granted access to a person's home, it's often hard to tell if someone in your  association is struggling with hoarding.

“You won’t know a hoarder from meeting them in the street but it’s their behaviors that represent their disorder,” says Lynne Johnson, a certified professional organizer specializing in the  chronically disorganized (CPO-CD) in Quincy, Massachusetts. “For example, they may not put out as much trash [for collection], or they may be  seen going through others’ trash or discarded junk mail. But you won’t really know they are hoarding unless you see the condition of their living  space.”

Other possible indicators are curtains pushed up against windows—typically caused by stacked items in the home—and windows that are closed all year long.

“If no one is ever allowed in the apartment, that’s also a really big red flag,” says Christiana Bratiotis, PhD, director of the Hoarding Research Project at  the Boston University School of Social Work. “It’s a recognition that they have some shame or embarrassment or they are fearful  that someone will come in and suggest that they throw away possessions.”

What distinguishes a hoarder from a collector? “It’s really the interference in carrying on daily activities because of their  stuff,” says Bratiotis. “They can’t shower, eat meals in the kitchen or sleep in their bed because there are too  many objects in those spaces.” Sue, our retired HOA resident, never ate meals at home because her kitchen was  inaccessible.

Bratiotis and Johnson say that hoarders also have strong urges to save items,  and express strong beliefs about the objects they save. “They’ll have a sense of responsibility for the object, or the object will bring them  comfort and they see its usefulness,” says Johnson.

Many hoarders exhibit the behavior early in life—even as young children—but it's often some traumatic event that turns a packrat into a full-blown  hoarder. For example, Sue told Johnson that a depressive episode years before  was the catalyst for her hoarding. “She’s not depressed now, but the situation got out of hand and it was hard to find a  starting point,” says Johnson.

Television shows such as TLC's Hoarding: Buried Alive have brought attention to  this serious disorder, but for the sake of 'good television,' they typically  profile extreme hoarding cases that include profound squalor, serious vermin  infestation, or the hoarding of live animals. This may make for riveting TV,  but it's not representative of the typical hoarding situation.

“Hoarding is often confused with squalor,” says Bratiotis. “Hoarding refers to the volume of possessions, whereas squalor refers to filth or  degradation. You can have hoarding without squalor. Some hoarders even have  cleaning people.”

But that's not always the case. Patrick J. Brady, a partner at the law firm of  Marcus Errico Emmer & Brooks in Braintree, Massachusetts has seen many hoarding cases, including an  extreme squalor case involving a former school teacher who hoarded trash. “The sinks and toilet didn’t work, and there was human waste all over the place," he says. "We got the  bathroom functioning, but the smell still lingers - as do the flies.” It's not hard to imagine the impact this resident's situation had on her  neighbors.

Johnson worked with an elderly food hoarder who had a serious problem with bugs  and mice. “He would buy produce in large quantities that was past its prime," she says.  "Sometimes it made it to the refrigerator and sometimes it didn’t." The food that didn't provided a feast for all manner of unwanted pests—and those pests didn't just stop at the gentleman's unit; they infiltrated the  neighbors' units as well.

It's stories like these that highlight why the issue of hoarding is of great  interest to co-op and condo owners and administrators: a hoarding problem doesn’t just affect the hoarder. In an association, where neighbors share walls,  ceilings, and floors, there are also safety, comfort, and quality-of-life  issues that need to be considered as well. Earlier this year in New Brunswick,  New Jersey, a fire left one man dead when firefighters could barely make it  inside his home because it was so cluttered. They said that there was little  chance of saving the resident because the clutter not only prevented the  firefighters from reaching him, but because all the debris acted as fuel for  the fire itself, causing it to burn hotter and more quickly.

Helping a hoarder requires a unique approach from management and community  administrators alike. Demanding that he or she simply clean up the mess won’t work.

“The property manager has a responsibility to the tenants for health and safety  violations, but there’s no intrinsic compulsion on the part of the hoarder to change things,” says Johnson. “If the property manager calls an outside service to come in and clean the place,  it can be so traumatic to the hoarder that their behavior will escalate and the  clean unit will fill up again, faster than it originally did.”

Obviously, most property managers aren’t social workers or therapists, and people who compulsively hoard need  additional help beyond just clean-up. That part can be tricky, however. “You represent the association, but you can’t tell someone they need therapy,” says Johnson. “All you can say is, ‘Here is the deadline to get this cleaned, so you can get into the apartment.’”

There are other communication strategies for dealing with hoarders, too. “People with hoarding don’t like that term, they don’t like the label,” says Bratiotis. “Use their language. If they call it stuff, you call it stuff. Approach the  person and talk about the greater good of the building.”

Bratiotis also suggests telling the resident what your expectations and putting  it in writing. For example, if you need exits and outlets to be clear, write it  down and break down larger tasks into smaller tasks. “It’s unrealistic to think that it would take one week to get back to the way it  used to be when it didn’t take a week to get like that,” she said. “Think of the imminent risks that need to be addressed first.”

Don’t be surprised if you are in the hoarder’s unit more than once. “It would be very unusual if it didn’t happen again,” says Johnson. “Hoarders have such an emotional attachment that it’s physically painful to let go of those things,” says Johnson. “If the homeowner is willing to address it and the property manager is willing to  be patient, it can really benefit things in the long term.”

Don’t show up with a cleaning crew, either. It can completely backfire the  situation. “You need to give them some control,” says Bratiotis. “Those interventions should only be used as a last resort unless it can’t be addressed any other way.”

Judy Briggs, franchise owner of 1-800-GOTJUNK in Framingham, Massachusetts,  remembers one elderly hoarder who was ordered by the fire department to get rid  of her stuff. Briggs brought four trucks and the removal took six hours. “While they were moving everything out, we reminisced about upbringing and family  but when she went back in, it was traumatic for her,” says Briggs. “We went in a few times after that because she had collected more stuff.”

How you treat a hoarding situation really depends on what your condo documents  say. “They will tell you if you have the right to access,” says Brady. “Typically, the maintenance provisions state if the unit is causing a hazardous  condition, the board can order the unit owner to correct it or they have right  to access it and take care of it.”

It also depends on what the resident with the hoarding problem is doing. In his  case of the school teacher, the Board of Health ordered the man to clean up the  unit.

“You can’t paint a broad brush with what you can and can’t do,” he says. “The Board of Health is better equipped to determine the conditions of the home  and what needs to be done. If the BOH deems it hazardous, they can order the  unit owner to correct it.”

Brady recommends that property managers contact the Board of Health or the fire  department or get a court order. “That way, the association doesn’t have to get their hands dirty,” he says. “If they have to get someone in to clean it up, the association will pay for it  and then assess the cost back to the owner. However, if the home goes to foreclosure, there is a good chance that money  might not be recovered.”

Without a court order, Brady says that managers are exposing the trust to  liability if they push to go in.

Once in the unit, it’s time to clean it out. “Most of what we remove is junk—magazines, books, old newspapers, a plethora of stuff and nothing of  significance,” says Briggs. “If we come across a picture or photo albums, we put that aside and will let the  family determine if they want that. We donate and recycle as much as we can.”

One unit that was vacated by a hoarder took Briggs’ company eight hours to complete and required six trucks. Each truck is 15 cubic  yards and holds a ton to a ton and a half of stuff. She charges by volume of “stuff.”

“The managers typically bring in a cleaning crew after us,” she says. She also explains that she’s seeing more hoarding cases than ever before. “People are more sensitive to it,” she says. “In the past, the person would be called a slob, but now we understand it better.” 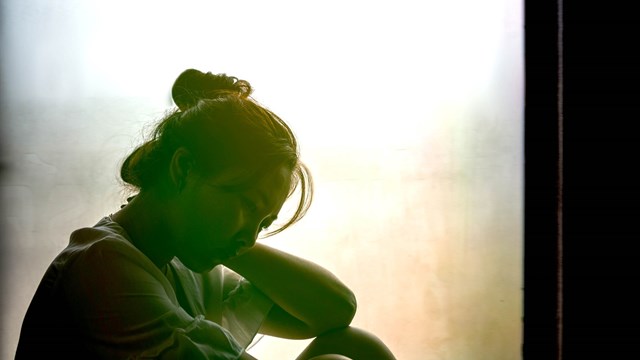