Do not show again [X]
By David Garry   2013 December Management 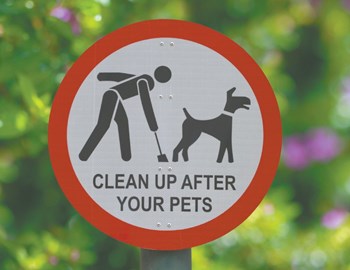 The signs “Post No Bills,” “Active Driveway” and “Alternate Side Parking” are all fairly common and relatively self-explanatory in urban settings. Other equally common signs we see in suburban communities throughout the U.S. related to pets are: “Curb Your Dog,” “Please Clean Up After Your Dog,” or “All Pets Must Be on a Leash.”

Well, in the Chicagoland area it all depends on the municipality you live in and sadly, while the ordinance that deals with picking up after your pet varies little from neighborhood to neighborhood, the signage and cleanliness of the sidewalks certainly can and do vary. This variance in pet waste has to do with a few factors: The number of dog-friendly buildings in one area, proximity to green spaces and dog runs, and the all-important “responsibility quotient” of dog owners in the community. All it takes is for a few individuals to start the downward spiral of pet owners not picking up after their pets and it becomes a messy problem, so to speak, creating a rift between those who love animals and those who don’t.

While it may be hard for dog lovers to believe there are people out there who are either indifferent to or even have a dislike for dogs, it's important to respect the fact that they do indeed exist and as such, try to respect them while taking their dogs for a stroll or to do their “business” outing.

When responsible owners take their dogs out to do their business, it’s a fairly routine process. Start with “curbing your dog.” This generally means bringing your dog to the curb to do their business. It’s a wonderful sentiment and actually works fairly often, but it is not foolproof. When curbing is not an option the next best thing is to (at least) guide them to a spot that is as out of the way as possible and hopefully they will do their “thing” there. Dogs, however, are no different than their owners in that when nature calls, nature calls and it is not always in the most convenient or inconspicuous spot. When this happens, the appropriate thing for the owner to do is clean up everything that is “removable” and continue on. Obviously, the irresponsible thing is to leave it there for some poor soul to step into.     There are some serious consequences to not picking up after your pet. Health hazards such as Campylobacteriosis, a bacterial infection that causes diarrhea in humans can be found in dog feces. Salmonellosis, the most common bacterial infection transmitted to humans from animals whose symptoms include fever, muscle aches, headaches and vomiting; and toxocarisis, roundworms that are transmitted from animals to humans also can be found in dog waste.

Dogs eat a protein-based diet, so it's a toxic based substance that needs to be taken out of the environment. Some people mistake dog waste as manure. But cow dung can only be used as fertilizer because cows don't have any meat in their diet.

“It's very unsanitary. Dogs walk and then they bring it [inside]. They could potentially spread disease. Especially if they have small babies in the house, that crawl around on the floor. That's not a good thing,” says Joe DiGrazia, president of Poopie Pickers in Oak Lawn.

Other than neglect, some try to improperly rid themselves of the dog poo. “A lot of people will hose it down, get it in the grass, and the problem with that is that it gets in the soil, and then it gets in the water system, and can contaminate the water system,” says Adrian Finch, a regional owner of Poop 911. There's simply no alternative to picking it up and throwing it away in the garbage. To deal with that reality, many buildings now feature pooper scooper stations. The stations provide bags for owners, and a garbage bin.

Finch says the stations are one of the few ways to encourage people to pick up after their dogs, and it's important to provide more than just a couple for large associations. “You have to put your bags in the right location. People are not going to walk 100 yards to get a doggie bag,” says Finch. “When people come home late at night, they're tired from a long day of work, or they've gone out, do they want to walk past three buildings to get a bag? Not really.”

To DNA or Not to DNA?

Unfortunately, that can often not be enough to reign in the poop problem. Property managers say the difficulty for many associations and boards is the ability to identify or enforce the rule. Some have resorted to hidden cameras, and big brother-type strategies like DNA sampling. The doggie DNA phenomenon is not just a reaction to watching too much CSI: Miami. Such services are sprouting up all over the country.

A news report surfaced in January that officials at a downtown Orlando, Florida condo complex are going to start testing feces to find out who is not cleaning up after their dog. The Vue hired PooPrints, a Tennessee-based company that will take DNA samples from the HOA’s dogs, which are put into a global registry, and then will be used to track down owners when they don't pick up after their pets. The condo said it expects to have all the DNA samples collected during the month. Violators could face a $100 fine. A Plano, Texas apartment complex also hired the same company in January to test its resident pooches. They plan to fine violators $250 for non-compliance.

The process is simple. One swab is “swooshed” around in the left cheek for 10 seconds, then one in the right cheek, and they are mailed into the lab and registered by use of a barcode. All owners—new and old—are required to register their dogs.

In theory, DNA testing eliminates any and all doubts about identity, as human criminal courts have demonstrated. But, using the method for finding dog culprits and their owners can cause complications.

“The challenge is the initial fee. It's expensive initially. When you have renters, they come and go, and people say they have one dog when they have three,” says Finch. The problem lies in the fact that a building needs 100% compliance from residents. Even if one dog is left out and the service finds no match, an owner could blame a dog from outside the community. Some unit owners might resent the concept of doggie forensics, and see it as a bit invasive.

Boards should be prepared to face those sentiments. “It's an interesting idea,” says Brent Straitiff, CMCA, AMS, co-owner and founder of TriView Property Management in Chicago. “But, the outlay of money for the service compared to the benefit is probably not there.”

DNA testing may still be relatively rare, but buildings are taking extra steps to enforce the law on dog waste. “Some communities have cameras that are able to monitor who's causing recurring problems—and just simply monitoring, who is abiding by the rules and regulations,” says Straitiff. Camera surveillance may seem a bit like Big Brother, but many properties use cameras anyway for security purposes. But, property managers are well aware that building rules are there for a reason. “The enforcement of the rules and regulations are what deters the activity from recurring. The purpose of rules is to change a behavior, not to fine people just to fine people,” says Straitiff.

Sometimes it's because of dog waste issues, sometimes it's something else like loud barking, but inevitably many communities will run into conflicts between dog owners and non-owners. And of course, the stakes are high. Some buildings even try to ban pets altogether if things get bad, but such attempts are often an uphill battle. “When you talk about banning people from their friends, it becomes a very controversial situation,” says Straitiff. “The most successful cases are when that rule is established when an association is being formed,” he says.

For most people, dogs and other pets are just like family members. To most it seems like common courtesy, and a simple responsibility to clean up after your dog, but for now, associations should keep their eyes and noses open. Boards should make efforts to educate their residents so they’re aware of the environmental impact of neglected dog waste.

David Garry is a freelance writer and a frequent contributor to The Chicagoland Cooperator. Editorial Assistant Tom Lisi also contributed to this article.