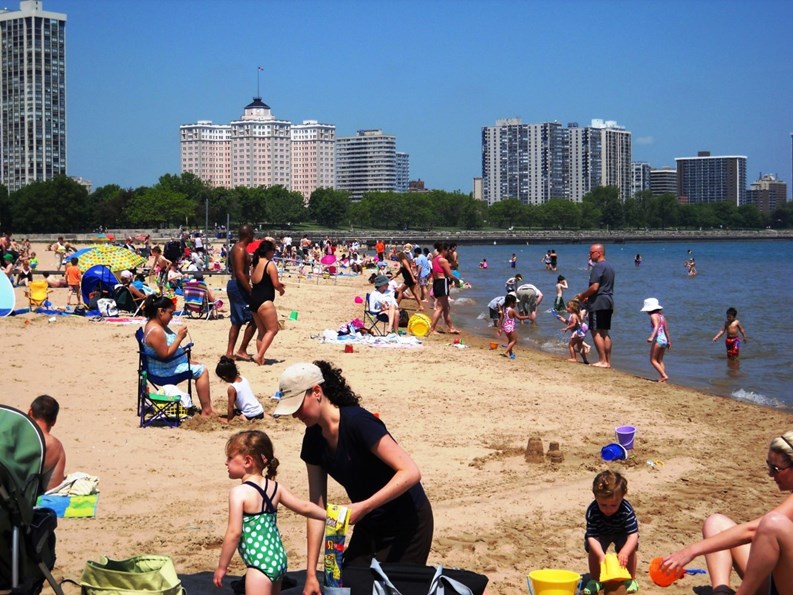 Occupying the lakefront some seven miles from the Loop on Chicago's North Side, Edgewater is one of the city's oldest and most enduring neighborhoods. Bounded by Foster Avenue on the south side, Ravenswood Avenue on the west, Devon Avenue to the north, and Lake Michigan on the east, Edgewater is surrounded by Uptown on its south side, Lincoln Square to the west, and West Ridge and Rogers Park to the northwest and north side, respectively. Today, Edgewater contains the smaller neighborhoods of Andersonville and Edgewater Glen.

Edgewater was first developed around the 1880s as a summer retreat for wealthy Chicagoans looking to escape the city for more peaceful surroundings. To address the demand for estates, developers bought out local farmers and cleared the existing woods around Lake View Township (of which Edgewater was a part) in the 1880s to make way for future development. From 1870 to 1887, the population of the area grew from 2,000 to nearly 50,000. In 1885, prominent real estate developer John Lewis Cochran renamed the northeastern section of Lake View Township: Edgewater. In 1889, the city of Chicago annexed Edgewater and began providing municipal services to its residents, including electricity.

With the amenities came more and more wealthy families, and by the early 20th century, Edgewater had been transformed from a rural farming community to one of the most fashionable addresses in Chicago, and its borders had expanded to include the land that would eventually be known as Uptown. Mansions and gracious homes spread inland from the lakefront, interspersed with luxury hotels and other commercial real estate catering to wealthy vacationers.

The prosperous times culminated in the late 1920s when the Edgewater building boom peaked and the area was designated an official Community Area as part of the larger Uptown neighborhood. After that, the expansion of more distant suburban areas—particularly in the immediate postwar era—began to siphon off younger families and resulted in a dulling of Edgewater's appeal. Crime and urban blight took a toll on the neighborhood's formerly-grand homes and eroded property values.

The slump didn't last, however. Residential development along the waterfront in the 1970s eventually stopped the slide and began to positively impact the blocks further inland. Further help came in the form of the city's efforts to revitalize the area by encouraging new business ventures and capitalizing on the neighborhood's unique history. In 1980, Edgewater separated from Uptown and was once again its own separate Community Area. A new wave of residents began to move into the neighborhood, rehabbing the remaining old homes and establishing businesses to both serve the community and attract visitors.

The Sum of its Parts

While Lake Michigan is the uniting element for the various parts of Edgewater, each neighborhood within Edgewater's borders has its own flavor and feel.

Andersonville, located on Edgewater's west side, is perhaps the most dynamic of these. Founded by Swedish immigrants as a farming community in the early 1800s, Andersonville was originally called Somerville, and in recent years has emerged as a diverse, vibrant community that includes many of the descendants of the original Swedish settlers, plus newer waves of immigrants, including many families from the Middle East, Latin America, and Eastern Europe. Bounded by Winthrop Avenue to the east, Ravenswood Avenue to the west, Foster Avenue to the south, and Bryn Mawr Avenue to the north, the area is also home to a robust LGBT community, arts organizations, and independent shops and businesses.

Much of the area's main shopping is on North Clark Street, sections of which have been named an historic district and are lined with antique shops, independent and designer clothing stores, restaurants, and lounges. Andersonville is also home to Midsommarfest, one of the city's most popular annual street festivals, as well as the Swedish American Museum at 5211 North Clark Street.

Just north of Andersonville is Edgewater Glen, which takes its name from the leafy thoroughfare of Glenwood Avenue, which traverses the length of Edgewater. According to the Edgewater Glen Home Owners Association, the neighborhood is bounded roughly by Granville Avenue to the north, Broadway to the east, Norwood on the south, and Clark/Ashland on the west side. Edgewater Glen is dominated by single-family homes surrounded by lots of trees and other greenery.

The area around Sheridan Road westward toward Broadway is known as Edgewater Beach. The neighborhood's name is well-earned: it's home to Foster and Osterman (also known as Hollywood) beaches, as well as George Lane and Berger Parks.

While the grand housing stock of the late 1800s and early 1900s has given way in many cases to high-rises (particularly along the waterfront) and comfortable, well-built single-family homes, there are still a number of historic mansions on Sheridan Road in Edgewater. Many of them have been converted into private schools, repurposed as headquarters of non-profit organizations, or purchased and used by educational institutions such as nearby Loyola University.

Dominating the skyline these days in Edgewater are a large number of residential condo communities—many of which are clustered on both sides of Sheridan Road between Foster and Devon Avenues. Among them are Horizon House, The Tiara, El Lago, and Shoreline Towers.

The buildings range from the modest to the luxurious, and their residents reflect the diversity of the neighborhood itself, including a large population of retirees, young families, recent immigrants, and post-collegiate singles looking for proximity to both the CTA and Lake Michigan without the exorbitant rents charged further down the shore.

While the recent recession has hit Chicago particularly hard (the city ranks third in the nation for foreclosures) there may be an upside to the downturn in that homeowners who had been priced out of desirable Edgewater neighborhoods like Andersonville are now seeing home prices fall to within their reach. One realtor's website lists a Victorian-era mansion that slid into foreclosure with a pricetag of $530,900—not exactly pocket change, but a precipitous reduction from its original pre-recession asking price of $899,000. Condo units are also seeing prices drop as buyers edging into the market have become more wary of overpaying in a down economy.

Even with the shaky economy keeping buyers and sellers on pins and needles, Edgewater and its collective neighborhoods are likely to weather the storm, thanks to their stable residential base and established businesses anchoring the community. The relative affordability of homes will likely draw in new residents, who in turn will add to the diversity and vibrant social tapestry of the area, and help write the next chapter in its history.